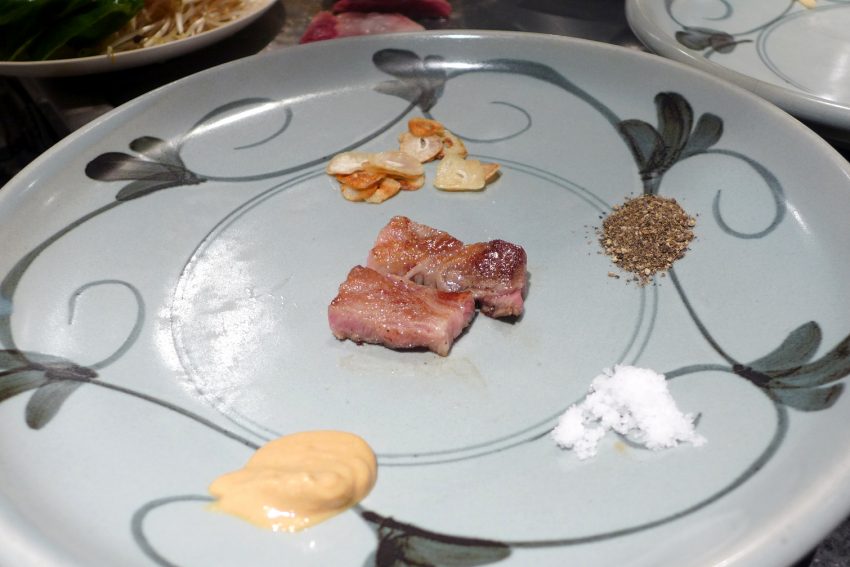 Although it was a short ride from Kyoto to Kobe, we were rushing a bit to get to our destination. We had a lunch reservation at Wakkoqu ANA Hotel at 11:30 and our schedule was getting tight. The good thing was that the hotel was connected to Shin-Kobe station through a covered walkway, but upon arrival at the hotel, I had no idea to how to get to the restaurant. We were a bit lost until I finally opted to ask the concierge, who politely pointed the way.

The restaurant was still closed when we arrived. I was secretly hoping we wouldn’t be late, so as not to embarrass ourselves as rude tourists. There were three more groups for our time slot, and we were all seated by the chef’s teppanyaki table. Seating was a little tricky, as we were on the L-portion of the table, where two members of our family each had one side. It was evident that this was almost a purely gastronomic experience, and barely a social one.

The staff confirmed our orders — 4 lunch courses of Kobe Beef — but provided us a menu for any additional food and drinks we wanted. Two of the bowls of rice were converted to fried ones, a delicacy many travel bloggers had advised in trying. Soon, our soup arrived and our meal commenced. The staff showed us the two pieces of sirloin steak from which all our meat would come from. The chef inquired our preferred doneness then began cooking, serving both our family and another foreign couple. He fried pieces of garlic first, whose central germs were meticulously removed prior to slicing. My mother quickly exclaimed that the flavor of this toasted garlic resembled the grilled ones she had in her childhood. The chef then started cutting some pieces of the steak, searing them on each side prior to serving. Vegetables were grilled on the side, served alongside the meat in a typical Japanese balanced meal.

The steak was good, don’t get me wrong. But bite after bite, I kept looking for that ‘aha’ moment where its tenderness, that melt-in-your-mouth texture that many customers had, shone. I knew that I was comparing it to the Hida beef we tried earlier in the week, which truly left an imprint in my tongue and my memory. Nonetheless, I savored every mouthful, while enjoying the view of several chefs in a row cooking steak.

The chef left out some fat from the sirloin steak, melted it on the griddle and toasted the rice in it. My expectations were increasing as the rice sizzled in the flavorful fat. Finally, it was served. My heart dropped as I realized that it was not as tasty as it was hyped up to be. Were my taste buds wrong on this day? It definitely lacked salt, and I could hardly taste the beefiness in the rice. Such was the consensus in our family. [To be fair, even before this trip, we usually do the same technique after pan-frying fish, chicken or pork or after making soy-based dishes…now we call those kinds of fried rice Wakkoqu rice.]

When the rice and pickles were brought in, I realized our meal was coming to an end. I honestly enjoyed their selection of pickles after such a fatty meal.

Finally, our meal ended with a dessert and a cup of coffee. As I thanked the chef for the meal, I asked what grade the beef was. He replied that it was A4. I do not believe that I could tell the difference between an A5 Hida Beef and an A4 Kobe Beef, but between the two, I much preferred the A5 Hida Beef. Maybe it’s a bad comparison as they weren’t on the same grade, but the relatively higher prices of A5 Kobe beef was more than what our budget allowed.

Still, this lunch was truly a treat. It may not have been what I expected, but it had an allure of its own, namely, the theatrical performance of the chefs as they prepared the meal. I truly want to go back to Kobe for another Kobe beef experience, but perhaps it will be time to try a new establishment.

Some practical notes:
1. We had to book our reservation online to ensure our seats, though the restaurant was far from full during our meal. For more flexibility in schedule, I suggest just walking in.
2. Each lunch meal cost Y6980, excluding taxes and services charges, which was a steal considering the dinner prices were more than double.
3. The restaurant was on Level 3 of the ANA Crowne Plaza Hotel, connected to the shinkansen station through a walkway — a great convenience to on-the-go tourists like us.