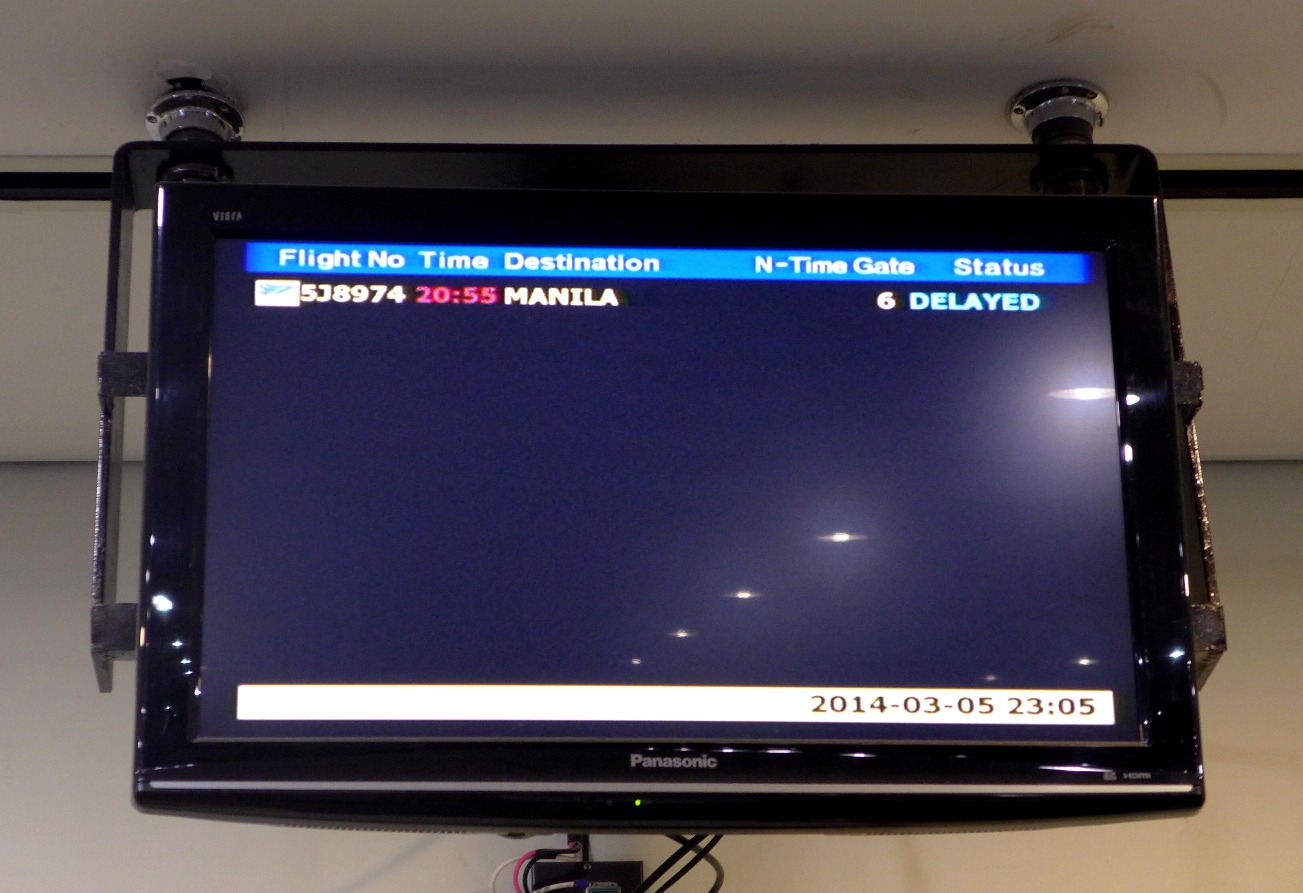 If you’ve traveled to the Philippines, you might be aware that there are only three major airlines dominating the air transportation sector — Philippine Airlines (which also manages PAL Express), Cebu Pacific (who bought Tiger Airways recently) and Air Asia (which merged with Zest Airways). PAL and CebuPac are the nation’s flag carriers, the latter being a budget airline and the former a premiere airline.  As a budget conscious traveller, I rarely flew with PAL. Most often than not, my domestic flights were with Cebu Pacific and Air Asia (before it merged with Zest Air), since they provided me with the cheapest flight options. However, with my recent travel to Mindanao, flight options have changed for me.

My regular travels never really started until April 2008, but it was only in October 2011 that I began flying domestically to explore other areas of the Philippines. You see, even if I experienced delays with CebuPac, the interval of which I use this airline provided enough room for my irritation to dissipate…until June of last year.

Imagine getting up early to show up at the airport on time, only to find out that your flight was delayed due to “late arrival of the aircraft”. I am not sure why such a reason existed, because as a logical human being, this reason is crap. Of course, there’s a deeper explanation as to why the aircraft arrived late, and that’s what passengers like me wanted to know.

It happened again on our flight back home from Cebu, but this time we noticed something else. It seemed that the airline merged two of its flights, delaying ours so that it would only fly one full flight instead of two half-full ones.

By this time, I was really getting annoyed with the poor service of Cebu Pacific. But hey, I’ve already booked our tickets by then for our flight last Thursday and it was moot to cancel since the tickets were non-refundable.

I have made a total of 13 flights with Cebu Pacific, a mix of domestic and international ones. Almost all these flights have been delayed, albeit some were shorter than others.

On March 5, my family and I ended our week-long journey across Mindanao. We were in Davao and destined to come home to Manila that night. We arrived in the airport very early but were only able to check in at around 6 in the evening, which was fair enough for our 8:55 pm flight.

March 5, 6 PM – Before we were able to check in, Cebu Pacific announced that our flight 5J 8974 was delayed for at least one and a half hours. I questioned why the flight was delayed, and the crew told me that there was “air traffic congestion”. When I asked the ground crew what options we have, she said that we could refund our ticket. As annoying as our “option” sounds, we obliged checking in. Our new ETD was 10:40 pm.

I was mad at this point knowing that they were giving me a crappy reason. There was no air traffic congestion. Why? Because other airlines bound for Manila were departing on time. I was sure of this since some of my relatives who were with us on this Mindanao trip were on an Air Asia flight that night and theirs wasn’t delayed. The PAL Express flights were also departing on time.

March 5, 8:30 PM – Flight 5J 8973 arrived. If I got the flight numbers right, the aircraft used by this flight was supposedly for our flight. However, given that there was an earlier flight 5J 8968 (scheduled to depart at 2:25 PM) which was severely delayed, I assumed the management opted to give this aircraft to them.

March 5, 9 PM – My father requested me to consult Cebu Pacific as there was an individual (I’m not sure if he was an airline or an airport personnel) who informed him that Cebu Pacific was merging flights. My brother and I proceeded to the counter at the gate and inquired regarding this.

I grilled the ground crew whether there were any passengers for the 9PM flight (yes, they had an 8:55 PM flight and a 9PM flight) on the queue at the gate, waiting to board the 5J 8968 flight. She denied that. Apparently, Cebu Pacific made an announcement that they were accommodating passengers of our flight 5J 8974 to be on this flight, but only the first 50 people without any checked baggage. We never heard any announcements.

At this point, I was really getting irritated. Together with some passengers, we questioned why our flight was being delayed, or why this aircraft was not being given to us when it was scheduled for our flight. There was even another passenger who asked, “Bakit VIP ba sila? Bakit sila nakakasakay pero kami hindi? Pare-pareho lang kaming nagbayad.” (“Are they VIP? Why do they get to fly while we don’t? We all paid.”)

I didn’t understand back then why they chose to bump our flight off, when other scheduled flights of Cebu Pacific were departing on time. (I later learned that our flight was on an Airbus A330, the same aircraft that was supposedly for 5J 8968.)

While we were asking the ground crew about this, somebody called their supervisor to provide answers. I asked why the aircraft was being given to another flight, when it should be ours. He denied that it was for us, and said that it was for flight 5J 972. He rudely told me to ask Operations Control to verify that information. I was taken aback, and got his name.

March 5, 10 PM – Cebu Pacific’s last flight 5J 972 departed on time. By this time, our supposed aircraft should have arrived since our boarding time was supposedly 10:25 PM. But there was none.

At this point, the remaining passengers, all of which belong to flight 5J 8974, were already asking the ground crew whether we’re really departing on our new ETD. By then, a rumor that the aircraft was having technical problems began circulating. This was the time when people began flocking the gate counter and questioned the ground crew. Soon, the Aviation Security Group arrived after a series of shouting ensued among the passengers and the ground crew.

In a few minutes though, the ground crew emptied the counter and there was no one, I repeat, no one from the airline company left at the gate.

March 5, 10:30 PM – At this point, I went back to the security check to ask someone, whether an airline company representative or an airport personnel, whether we had a flight or not, or what time our flight would be made. The airport personnel told me it was beyond their control, and it was between the passengers and the airline company. I asked for a Civil Aviation Authority of the Philippines (CAAP) representative, and they pointed me towards the terminal fee ticket booth.

I asked the lady, who earlier told me that my flight was delayed, the same questions. She said that CAAP couldn’t do anything about the situation. When I asked whether she was sure of this, she dialled a number and asked me to talk to someone from CAAP on the phone.

I asked the same things — whether we had a flight, or what time our flight would be made — to the person I talked to on the phone, and he had no answer for me. He advised me to go to the airline office downstairs and ask the airline company myself. I hated that response. I told him whether he could, as a government officer, put pressure on the airline company to provide us with answers, because we apparently couldn’t do that. He said he would try. I also urged him to go with the airline company when they give us answers to serve as mediators between the fuming passengers and the disappearing airline personnel. He told me he couldn’t grant my last request.

After I crossed the security check, a lady approached me to talk to her son on the phone, asking me to explain to her son what’s going on. I soon found out that her son was working for Cebu Pacific, and while I try to give him a detailed picture of what’s happening, I couldn’t help but inject how awful the service of Cebu Pacific was. To be fair, he appeared to be the most reasonable airline personnel I talked to that night. He even asked me whether the local crew were hiding, and since I couldn’t exactly say that, I just said that they were gone. He was grateful for my feedback.

At this point, there were about 300 confused passengers waiting at the gate. We all didn’t know what’s going to happen. We didn’t know what time our flight would be, or whether we had a flight at all. I personally hated how we couldn’t be given answers, because there was simply no one in authority who wanted to talk to us.

March 5, 11 PM – Cebu Pacific management finally showed up, and announced that they had downgraded our aircraft from Airbus A330 to Airbus A319/320 (I cannot recall, but it was a smaller one than A330), hence not all the passengers could be accommodated. Only those with sequence number 180 and below would be on the flight at 1 AM, March 6. The rest would have to make do with flights later in the morning but would have accommodation for the night.

The manager reasoned out that they were looking out for the safety of the passengers, claiming that our aircraft was facing technical problems that couldn’t be repaired. He also claimed that they chose who could make the flight using a FIFO (first in, first out) basis. (If they used the same logic earlier, wouldn’t we have been home by now?)

March 6, 1 AM – Cebu Pacific started distributing food for the passengers of the flight. They also started “consoling” the hungry and tired passengers. I noticed how the ground crew were trying to make small talk with the remaining passengers. At the back of my mind, I hated how the airline employees now appeared to be concerned, whereas they didn’t seem to care about our welfare a few hours ago.

Sure, I made a lot of savings by flying with Cebu Pacific. After all, I usually avail only of promo fares. But with them, you really get what you pay for — low price, bad service. In actuality, however, the low peso price wasn’t the only cost to this flight. I had to add my lost day (since I wasn’t able to do anything on March 6 due to lack of sleep) and the stress they caused me and my family. At the end of the day, it wasn’t worth flying with them anymore, unless you want to experience the worst of air transport.

I definitely do not recommend them to anyone, and I wish I never have to fly with them again.