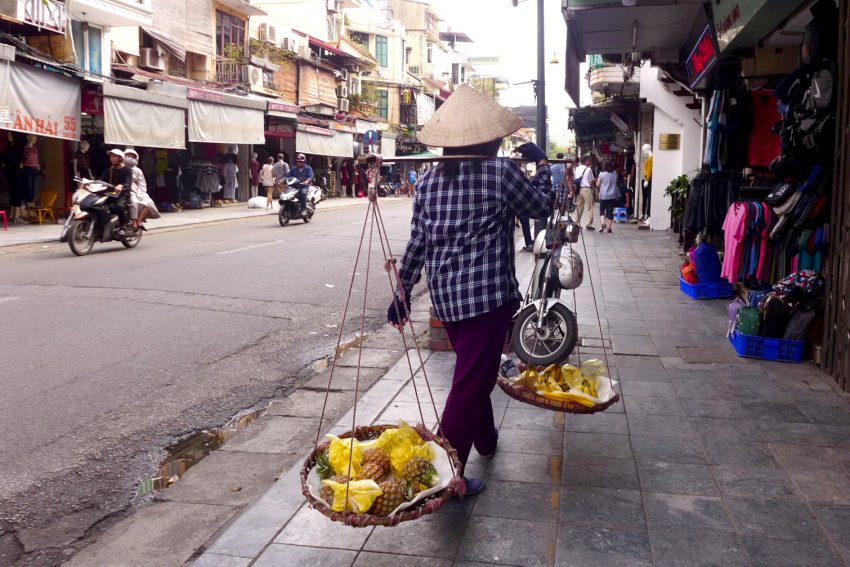 To me, Hanoi wasn’t one of those capitals laden with tourist spots and must-see attractions. Initially, I thought that five days were more than enough to visit, with lots of room to relax and just go around town. Unfortunately, one day had to be cut off from our trip as we were to have a sudden visitor back home. In hindsight, four or five days wouldn’t have been enough. Hanoi was one of those places where I felt I didn’t notice that days were already piling up. We weren’t exhausted chasing one attraction after another either. On most days, we simply went to one tourist spot in the morning and spent the rest of the day roaming around the Old Quarter and filling our bellies with great food.

Here were some of the things we did in Hanoi:

I could spend weeks in the Old Quarter and still be excited about it. Most of our days were spent walking around this district in Hanoi. Admittedly, it was not for everyone. My parents were initially unpleasantly surprised by its sights and sounds, but somehow this area had won them over. The food, the shopping and the people were some of its greatest assets. I particularly loved seeing the architecture amidst the chaos and watching locals don their native hats as they went about their day.

Arguably, Hanoi’s biggest draw wasn’t exactly in Hanoi, but in Ha Long Bay. We opted for a day cruise instead of the more common overnight cruises — not only was it cheaper, but it also fit our itinerary much better. It was a shame that the sky was a bit overcast when we were there, but nonetheless I was impressed by the views that the bay offered. We went with Paradise Cruises and it was certainly worth the little splurge; their service was just superb.

The only drawback was that one of the islands where we docked was just too full of people. It certainly took out the relaxing aspect of the entire trip. On another note, a fellow tourist we met at a bun cha place recommended to go for a Bai Tu Long cruise instead, something that would be worth considering the next time around.

See the Temple of Literature

While this temple dedicated to Confucius wasn’t the most majestic of temples that I’d seen, it was still interesting to see the impact of this Chinese scholar to the lives of the Vietnamese. Here we saw how Chinese influences were present in Vietnamese history. Interestingly, we also witnessed a bit of a French-Vietnamese connection, as we noticed big groups of French tourists being led around by a French-speaking Vietnamese tour guide: a testament to warm post-colonial relations.

Although I was terribly unfamiliar with Vietnamese cuisine, this trip was my chance to devour some of the nation’s best dishes. Bun cha and cha ca both captivated my heart, but overall I had a new-found love for this cuisine. I truly enjoyed these local meals, and I can’t wait to try more of their dishes in the future.

I truly had no intention to visit the mausoleum itself, but was left with no choice as we couldn’t find a way into the complex without having to go through the building housing the embalmed body of Ho Chi Minh. I was a bit put off by the level of strictness in the area: while I understood that it was hallowed ground, the air of stringency felt a bit too much. We didn’t get the chance to explore other buildings in the complex though, and I’m not sure whether I’d be interested in going back to take a look at the spots we missed given our previous experience.

Have great cups of coffee

Vietnamese coffee was strong and sweet, something I preferred my coffee to be. It was a great kickstarter to every morning and an instant pick-upper in the afternoon. I was only able to try the famous egg coffee once, and while it was good, I still preferred the ‘regular’ Vietnamese coffee.

Colonial District – I would have loved to walk around this area and admire the architecture. While I was able to take a glimpse of the Hanoi Opera House on the way to Ha Long, we were unable to get a more detailed visit in the area. It also seemed that there were a lot of restaurants waiting to be discovered.

West Lake – It was another area I wanted to explore but there was no more time unfortunately. It would have been another great location to spend a relaxing day.

Imperial Citadel – I was intending to visit this place, but the staff at our hotel dissuaded us from going. After not believing her about Dong Xuan Market, I had to follow her advice this time around. Maybe I’ll reconsider in the future, if there’s more time on my hands.

Hanoi was one of those places where I felt I was truly on vacation. Despite its lack of more famous spots, I honestly enjoyed the few days we spent there. The people were warm and amazing, and the culture was so laid-back that I couldn’t believe I was in the country’s capital.

I can’t wait to return to this city someday…if only the pandemic would be over. Until then, happy (virtual) travels!