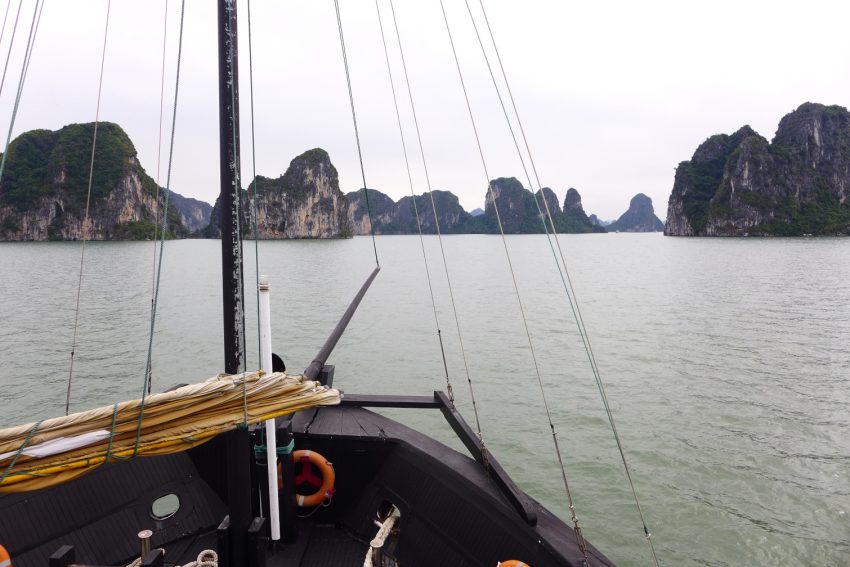 Among the things to do in Hanoi, the only thing that beat roaming around the Old Quarter was having the same walk in the area early in the morning. Strolling around this old part of town just as the city woke up was a mesmerizing experience — ladies washing leafy vegetables by the storefront, old people gathering around for coffee, and locals delivering some carefully-balanced flowers on bicycles. The streets were fairly empty, with an occasional vehicle or the more familiar motorcycle traversing the roads.

On this morning’s walk, we headed towards a different path: southward along Hang Da and Quan Su. I wasn’t sure it was still part of Hanoi’s Old Quarter, but our morning stroll was still beautiful. Sidewalks were fairly existent in this part of town, making our excursion easy. It was fascinating to see old architecture pop here and there, along with the striking yellow facade that occupied most of the vista. Trees lined the pathway while their canopies provided a comforting shade to the oncoming traffic. It was one of the prettiest walks we’d had, and within a few minutes, we were already at our destination: Hanoi Towers.

It was too early for anything, except to watch vehicles ply along this relatively-busy intersection. Although this place was very close to Maison Centrale, or the Old Hanoi Hilton, it was not our destination. We were here for Home Teas Finest Lounge, the pickup point for our Ha Long Bay cruise. We chose Paradise Cruises for this trip within a trip, which would later turn out to be a great choice.

Unlike most cruises, we wanted one that was a day trip only, something that was tricky to do only a few years ago. The opening of the Hanoi-Ha Long highway paved the way for this day trip to be possible, and I was truly grateful for this development. Admittedly, I was a little apprehensive of the cruise, not only because I easily get motion sick, but also because most of these cruises were marketed as romantic getaways for couples. Luckily, as our fellow passengers poured in, it became evident that this day cruise was created for families. In fact, only two groups were couples. Incidentally, most of the passengers were also Asians, except for one Caucasian couple. When the pickup time struck, we were then loaded on the bus which departed ten minutes later than scheduled as one group was missing (we left without them).

As the bus made its way out of the city, we passed by some of Hanoi’s more opulent neighborhood. We were also able to see a beautiful rotunda with more colonial buildings, including the elaborately-designed Opera House. We entered the highway in no time, and so a more rural landscape soon emerged by the roadside. We only made one stop throughout the two-hour bus ride, and in no time the port of Hai Phong was already in view. A little later, flooded fields took the foreground, while shadows of karsts occupied most of the horizon. We were getting close; Ha Long Bay was within our reach.

We alighted the bus at beautiful lounge where refreshments awaited us. After a short time to go to the facilities and to stretch our legs, we were then driven to the point of embarkation. What we didn’t expect was that we were in for a treat: we had an upgrade. We only reserved for a day trip on Paradise Explorer, but we soon realized we would be in Paradise Luxury, a bigger boat supposedly catering to overnight guests. After setting our personal items at our own tables, everyone was eager to get on the upper deck to take in more of the vista. It wasn’t until the call for lunch chimed in when we finally settled down in the dining room.

Lunch was served buffet-style, and honestly, the food was very plenty for the thirty passengers on board. Seafood was abundant, and so were salads (which I tended to avoid whenever I was on a trip). The food wasn’t the best Vietnam had to offer (especially with the great food in Hanoi we’d had so far), but it was good and truly far better than my expectations. The dessert was a little bit disappointing though, but the views outside the window certainly made up for it.

More on our beautiful day out in Ha Long next time. Until then, happy (virtual) travels and stay safe everyone!