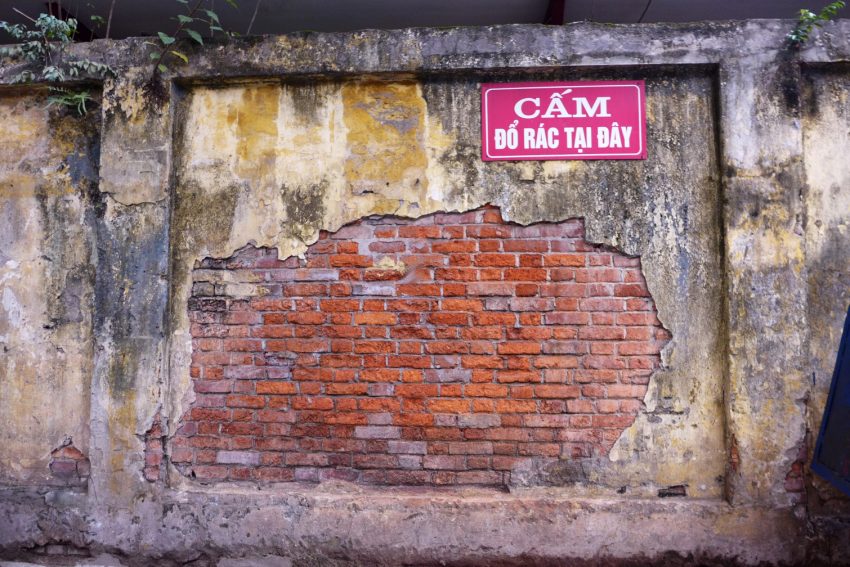 Hanoi’s Old Quarter was an assault on the senses. The banging of metal from the shop in front of our hotel played loudly along with the roaring motorcycles traversing the streets. Crossing the streets was a feat of its own — giving you a little jolt of adrenaline as you see the myriad of motorcycles approaching. The staff from the restaurant next door invited patrons on top of his voice, adding to the already loud atmosphere. The aroma of coffee wafted in the air as a coffee shop came into view, while sometimes smoke took center stage from all the grilling the locals were doing.

Electric wires clumped in poles, seemingly decorating the shophouses that clustered together. Once in a while, a beautiful facade emerged: either a pale colonial yellow, but most of the time a Buddhist-influenced wall. A canopy of trees pervaded in a lot of the streets in this district, providing shade to the peddlers selling their goods. A lot of locals still wore the traditional conical hat, but most were just up and about, minding their business. This was Hanoi’s Old Quarter: something overwhelming at first, but something we had grown to love during our stay.

Here were some things I considered precious when we visited the Old Quarter:

Strolling around Hoan Kiem Lake on the weekend

Nothing described Hanoi’s laid back culture more than a weekend around Hoan Kiem Lake. Locals and tourists flocked the area to relax — whether that be simply to see the serene lake or to be active on the closed-off roads around the lake.

Exploring the traditional streets and their crafts

Every street in the Old Quarter once represented a traditional craft. While many had given way for more modern goods, there were some that remained true to tradition. The bamboo street and the street for traditional medicines were two interesting ones.

While most shophouses looked clumped together, a few pale yellow buildings stood out once in a while. Sometimes, Buddhist influences were showcased in intricately-decorated walls. Stunning!

Hanoi’s shopkeepers were some of the friendliest I had ever encountered in my travels. They weren’t pushy either. I’m not an avid shopper, but browsing the shops could in the Old District could spell a relaxing afternoon, especially as you exchange banter with the shopkeepers.

Wandering in the evening

While mornings and afternoons had their own appeal, a different vibe became evident in the evenings. Tables and chairs soon occupied the sidewalks where many locals and visitors enjoyed a meal or a few drinks. One of my greatest memories was witnessing locals watch a game of football as the energy was mesmerizing. They scream on top of their voices as if they were on the stadium, even if they were just by the roadside sitting on low stools. It was fantastic.

Whether it’s pho, banh mi, cha ca or bun cha, a lot of traditional Vietnamese dishes were within a few hundred meters. It was impossible to get hungry here!

Visiting the traditional house at 87 Ma May

As a sucker for traditional old houses, I knew I wanted to see this place. It was certainly less extravagant than those found in Malaysia, but its simplicity had its own appeal. I personally loved the wooden window panels on the second floor bedroom as well as the cascading roof as it framed the house.

Seeing a variety of street peddlers

Watching street vendors come and go was interesting. Some balanced baskets on their heads, while some street vendors used bamboo poles to carry their wares on their shoulders. Unfortunately, I also witnessed a street vendor trying to take advantage of a tourist who tried posing with her traditional carrier. We also experienced a roving street vendor who tried to charge us $2 for a piece of bread…which we politely declined. Occasionally, one could catch a glimpse of bikes precariously loaded with flowers to be delivered — such a delight to see especially early in the morning.

If you ever visit the Old Quarter, let your feet take you wherever, get lost and enjoy the atmosphere. I hope you’ll have as much fun as we did.

Until next time…happy (virtual) travels!