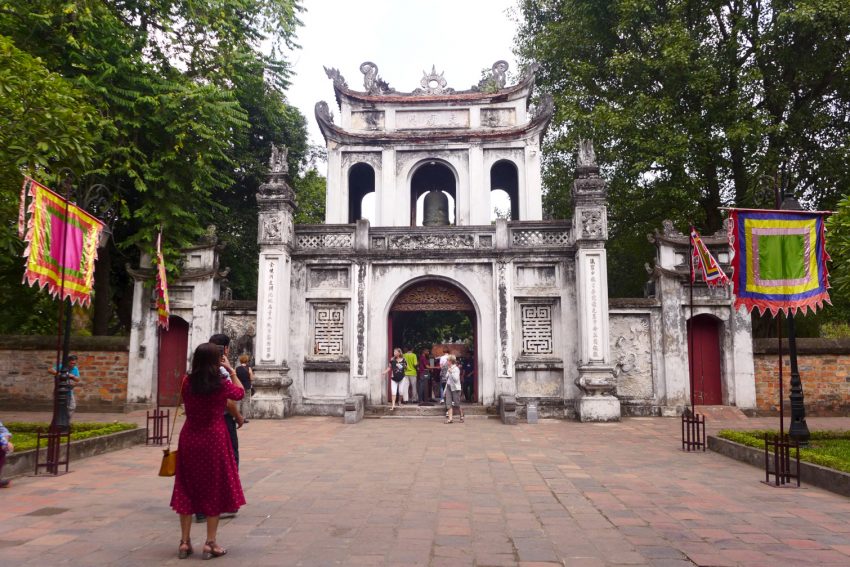 Armed with a ride-hailing app, I felt ready to leave the “walkable” confines of the Old Quarter to discover more of what Hanoi had to offer. We ventured out to the Temple of Literature, one of the most iconic tourist attractions in the city.

From the roadside, the complex’s white gate was shadowed by trees that lines the sidewalk. Had it not been marked on my map, I would have easily dismissed it as another one of Hanoi’s beautiful facades. Unbeknownst to me, the complex was rather big despite its unassuming exterior.

Upon entering the gate, an oasis of calm surrounded us as a landscaped garden greeted us. The central pathway was shaded by towering trees, while seemingly directing us towards the centuries-old pavilion. The next courtyard then opened up to us with its massive well, which looked like a stagnant body of water to me. Despite being named Well of Heavenly Clarity, the water’s green color was rather off-putting. By the side were stone steles with turtle sculptures at their bases–carved on these were the names of successful examination takers.

We proceeded to the next courtyard where a massive emptiness engulfed the space. Apparently, this was where ceremonies took place, hence the lack of structure at the center of the courtyard. Buildings were erected all around, including a small hall dedicated to Confucius and his disciples. This area also showcased Chinese influence on the temple’s architecture the most, with its curved roofs and equally spaces pillars. It instantly reverted me back to wandering around Beijing’s Forbidden City, albeit was on a less grand scale. More Chinese influence was displayed on the temple altars, where typical offerings such as incense, fruits, and candles were ever present.

This hall was also the most congested portion of the entire complex. A lot of tourists roamed around the tiny space and French soon became the language that reverberated in this hallowed hall. A large group of French tourists were being led around by a Vietnamese guide. While I know that Vietnam was colonized by the French, it was still a bit surprising to witness nationals of a superpower visit a former colony in such numbers. Later on the trip, I would encounter more groups of French tourists, perhaps a testament of good relations and deep friendship between the countries.

Unfortunately, this was also where I had massive mental lapse: we were not able to explore the Imperial Academy, supposedly situated in the fifth courtyard. I wasn’t sure if it was under renovation at that time or if I simply overlooked it as I thought the altars were the finale, but we missed the historic academy along with the drum and bell towers.

By the time we were ready to head back, a small ceremony was being performed at the altar where two giant crane sculptures stood. I could not understand a word of it, but it was an interesting experience, especially watching a Vietnamese Confucian(?) priest preside over the affair.

Before heading back, we took a short rest under the shade of trees in the fourth courtyard while observing people come and go. It was a peaceful walk back to the entrance, and we were ready to go back to the now-familiar Old Quarter.

More on this next time…happy (virtual) travels!