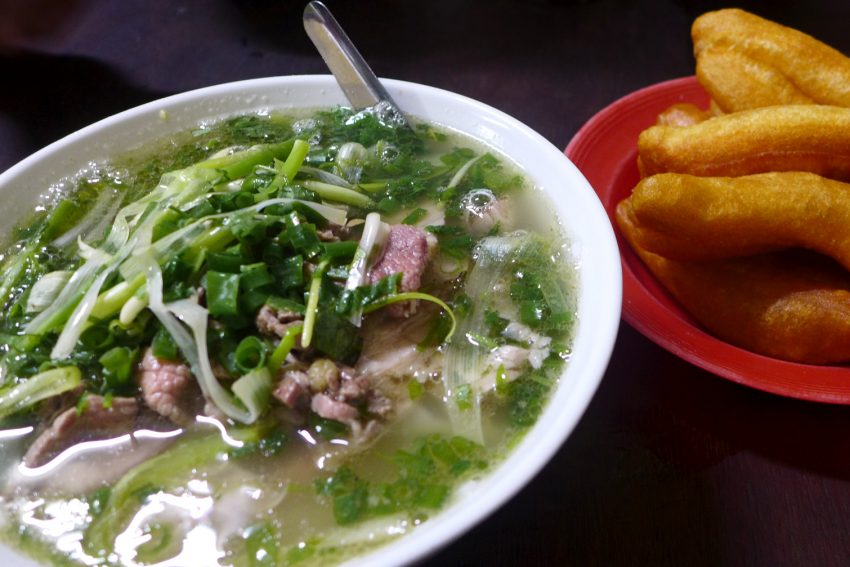 It was an unexpected early start for  us on our second day in Hanoi. It was still dark when we started treading towards another food institution in the Old Quarter. This bustling part of town was eerily quiet in the morning, but life was already coming about. Ladies were washing vegetables by the curbside, and some peddlers and vendors had begun their days. Upon arriving at the shop, the staff was not the most welcoming, suggesting that they still weren’t open. They were still busy preparing for the morning rush, and realizing we forgot a few things from the hotel, we decided to head back before grabbing breakfast.

By the time we returned, the sun was already up, the store was in business, and a queue had formed by the entrance. Three bowls of pho was our order, which was paid for upfront, and the lady began manically slicing the cooked beef very thinly. The man who I assumed to be the lady’s husband sliced the raw beef that would later be cooked in the hot soup. Upon seeing some fried dough that accompanied most locals’ breakfast haul, I decided to have a plate added to ours. The lady seemed annoyed by my late request, and even more by my inability to hold with my bare hands a bowl filled to the brim with scalding broth.

In any case, I made it to our table without tripping or spilling soup all over myself or another patron. One down, two to go. Later, three bowls had graced our table without any disaster…phew! It was time to indulge in these Vietnamese wonder.

Admittedly, I had never been familiar with a bowl of pho bo. Vietnamese cuisine was something I did not grow up with, despite the country being our next-door neighbor. But what I know was the flavors of Asia, and it helped me guide the bowl of pho I wanted mine to be.

My first sip of soup was less than stellar; I found it a little on the bland side. It was easy to remedy though: bottles of condiments could be found on the table. The favorite condiment of the Vietnamese came to the rescue: fish sauce. A little pour of this powerful concoction was enough to bring the flavors alive. Adding a few chili slices made the bowl my own: I simply enjoyed it with a kick of spice more than without. With the broth fixed to my liking, it was time to slurp the noodles and sip (or gulp) a lot of broth. What was new to me was the dunking of the bread.

The elongated doughnuts, or what I later learned as dao chau quay, was an integral part of this new experience. These fried pieces of dough were so porous that they absorbed the broth, and biting into them later on was a delightful experience. This was perhaps Vietnam’s version of a Filipino’s breakfast of pandesal dunked into a cup of coffee (albeit theirs was a lot more filling). I simply loved it.

The serving was a bit too big for my not-so-hungry stomach in the early hours in the morning. By the time we left, a longer queue had formed by the entrance. I could only imagine how much longer it would be as the morning eased into midday; it’s no wonder how this simple dish would be sold out by lunchtime.

This had indeed been a perfect way to start a winter morning. We were ready to explore more of Hanoi.

More about Hanoi next time. Until then, happy (virtual) travels!