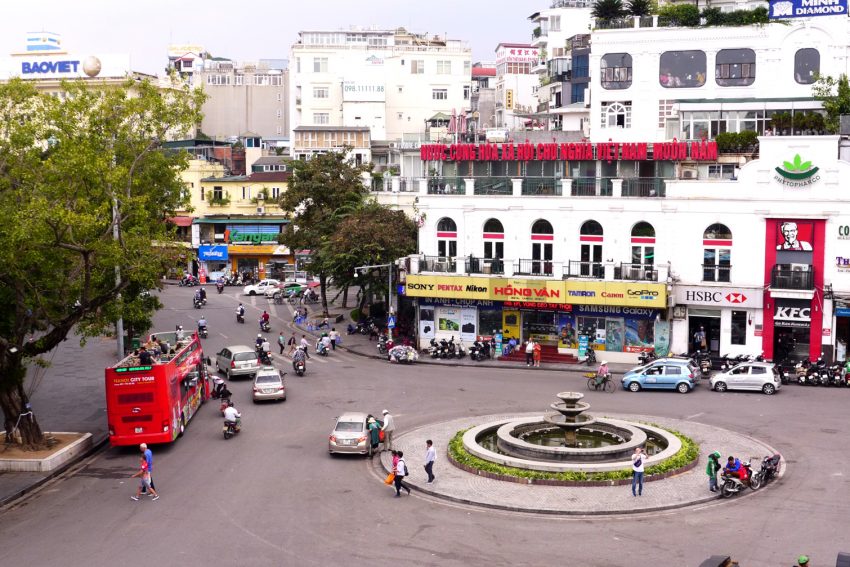 From the Temple of Literature, it was an easy Grab ride to go back to my favorite area in Hanoi, the Old Quarter. After a quick stop at our hotel, we took another ride to Dong Xuan Market, thinking that it was another tourist attraction. The hotel staff on duty initially expressed her concern as she questioned what we were to do there, but we shrugged it off and said we just wanted to see the place. Little did we know that she had a massive point. To say the least, our visit was beyond underwhelming. Sure, there were knickknacks here and there, pieces of clothing and footwear, but all in all, it was not a place that truly interested us. The variety of goods that I saw on the ride on the way to the market was a lot more captivating.

Disappointed, we decided to walk down the primary artery of Hang Duong, the very street where the weekend market took place just the previous night. The road was now open to traffic, limiting our stroll to just one side of the street. The goods were mainly overruns or knockoffs of sports apparel. Some shops even sold sneakers, bags and other adventure equipment. There were a few which sold Vietnamese items, particularly lanterns, traditional tops, and the iconic conical hats. Beyond these attractive stores, it was fascinating to see people roaming around — from fellow tourists lighting up at even the simplest vista they saw to street peddlers donning the ubiquitous Vietnamese hats. The plethora of motorcycles invading the streets was mesmerizing too. Just a word of caution though, some of these vendors pose with tourists hoping to get a small fee of some sort, but hounded the tourists after not being paid their “fee”.

With our stomachs beginning to growl, it was time to head off for a very late lunch. It would be another Vietnamese specialty, though this time it wouldn’t be a noodle soup. It was banh mi, a baguette sandwich filled with meat, veggies and pate.

The store we headed to was very far from fancy. We placed our order by the entrance and observed the banh mi come to life from a simple baguette. Like many casual joints, we sat on stools as we devoured our sandwiches. It was certainly flavorful and it would turn out to be the best banh mi we would have throughout our stay.

From the sandwich shop, we walked around a little bit more around the area, where we spotted a shop selling outdoor and sports wear. I liked that shopkeepers in Hanoi generally never bothered or pressured us as we perused their stores, unless we asked for help. The lady who assisted us was easy to deal with, bantering with us as we attempted to haggle the price down. After a few minutes, she told us she liked Filipinos as customers, unlike a certain nationality who were loud, touched everything and bought nothing. It was a sentiment echoed by another local we had the chance to speak to, and I was a bit surprised but refreshed by the sheer honesty.

Our short shopping walk landed us back by the fountain at Hoan Kiem Lake. Before we went back to the hotel, we wanted to have some afternoon coffee first. I was eager to try the famous Vietnamese egg coffee from Dinh Cafe, a descendant of the iconic Giang Cafe. Getting to the coffeeshop entailed getting through a narrow alleyway, going up some narrow and steep stairs, and passing by less-than-clean vistas. As we found ourselves by the entrance, my parents were taken aback by how the place looked, and coupled with what we had seen along the way, it was a no-go. We retraced our steps and headed to the more comfortable Highland Coffee instead.

Getting a table on a weekday was so much easier than the previous day’s endeavor. We had some coffee and some sweets, but I limited myself to one cup after having learned my lesson the previous night. Before leaving, we popped by the balcony to view Hoan Kiem Lake and the traffic down below.

It had been a great day exploring Hanoi… Ha Long Bay will be up next. Happy (virtual) travels and happy holidays!