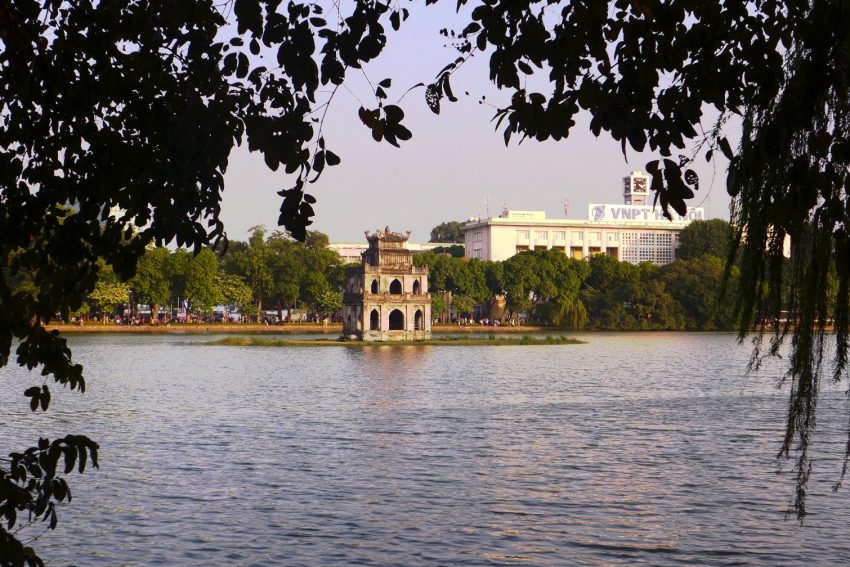 After checking into our hotel in the Old Quarter, we decided to grab some lunch before getting some rest. Though navigating Hanoi’s Old Quarter was tricky for first-timers like us, we were lucky that an iconic food place was not even a hundred meters away: Bun Cha Dac Kim.

It’s still a bit early for lunch, but the place was already packed. We shared a table with a stranger, another foreigner to this place. Our order was plain and simple: some bun cha and nem cua.

Soon, bowls of noodles and soups and trays of various greens were on our table. The broth was a little on the sweeter side, but adding a little dose of fish sauce and the assortment of greens certainly upped the entire bowl’s flavor profile. The sausages were little bundles of meatiness, imparting savoriness to this clear soup. The nem cua, or spring rolls, was a side dish that provided a textural component to this Vietnamese delicacy.

The fellow foreigner we were sharing the table with was friendly enough, telling us how much he enjoyed his cruise to Bai Tu Long Bay earlier on his trip. Later, he asked us, “are you guys Filipino?” Apparently, he had a Filipino friend in childhood, whose family’s hospitality and food (especially those grilled meat skewers we call barbecue) stuck in his memory. He later identified himself as a lawyer in D.C. He was so down to earth that I honestly couldn’t picture him in a suit. After finishing his meal, he said his goodbye and we continued enjoying our noodle soups. With our bellies full, we returned to the hotel. It was time for a little bit of rest; Hanoi was waiting in the afternoon.

During the weekend, the roads around Hoan Kiem Lake are closed to traffic, making it one giant pedestrian-friendly zone. It was a bit quiet when we got to the area, but chairs were set up on one portion that it seemed that a performance of some sort was happening soon. Around the lake, things were a lot quieter. Most people were taking photos of the iconic structure floating on the water. Some were couples enjoying the scene; others were families spending quality time together.

As we turned and made our way to the opposite side of the lake, things were busier. A big crowd gathered around a group of dancers performing their routine. Another group was busy playing foot badminton. Street vendors were abound, and so were painters who set up shop on the lakeside. Some women were donned in their traditional Vietnamese garments, and there were even a few having their portraits taken while posing in front of the red bridge.

By the time we had made almost a full circle, we were getting tired. We headed to Highland Coffee, a comfortable cafe in the middle of the action. For sure, it wasn’t the best coffee Hanoi had to offer, but on my first sip, I was hooked. The cup was very strong, but it was enjoyably so, especially while savoring a delicious banh mi sandwich on the side.

Enamored with the delicious cup (and having had no coffee earlier that day), I made the mistake of ordering another serving. By the time the sun set and the evening weekend market popped up, I was feeling a bit tipsy. I never knew it was possible to feel this way due to coffee, but there I was, navigating the crowded shopping street with a buzz in my head.

It seemed to me that this night weekend market was catered to tourists, as most shoppers seemed to be from all parts of the globe. Souvenirs flooded the stalls, along with “branded” pieces of clothing and some apparel overruns. One thing was for sure: the mild winter weather was perfect to enjoy this outdoor walk. After procuring a few items here and there, we left for dinner and eventually made our way back to our hotel. It had been a beautiful first day in Hanoi.