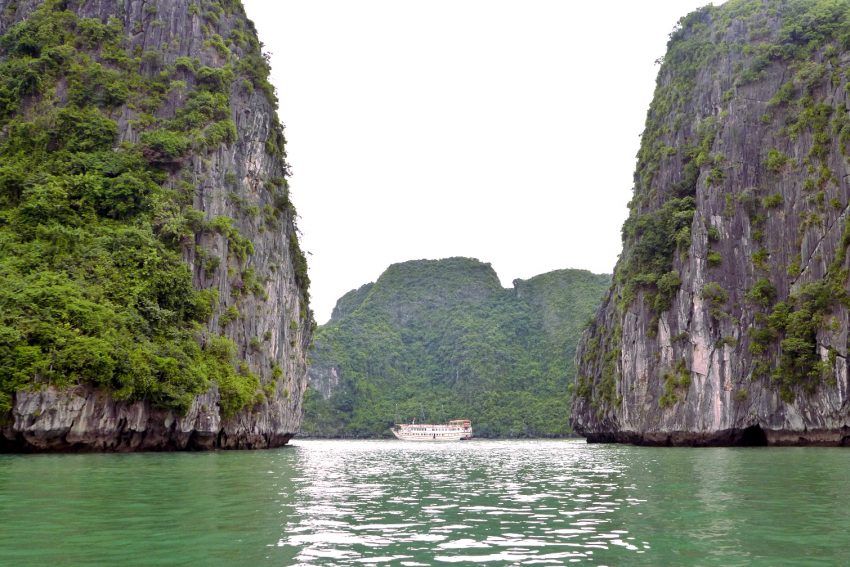 I poured in a lot of hours researching what the best day cruise for Ha Long Bay. I had to juggle a level of service I wanted with a price I was willing to pay, and to make sure that I was going on an itinerary that would let me appreciate the beauty of the bay. I was debating whether to go with President Cruises, as they had a fleet of beautiful boats, or Paradise Cruises, whose day trip boat was less than stellar. In the end, Paradise Cruise’s Paradise Explorer Cruise won me over; it simply had the better spots I wanted to see in the bay. Luckily, our boat was upgraded to Paradise Luxury, and so we had the best of both worlds.

Our itinerary was perfectly timed as we were getting close to our first stop by the time we finished lunch. It was time to go inside Sung Sot Cave. The staff cautioned that there was some level physical fitness required as there was to be a climb. Knowing that this was one of the highlights during the trip, I encouraged my parents to go. They managed to get through the steep steps leading to the mouth of the cave, although some pauses were necessary for them to catch their breaths.

While the exterior of the cave was unimpressive, inside was a different story. The stalactites and stalagmites looked more like delicate carvings instead of natural wonders. The chamber was very big and its ceiling was high. The guide was discussing the formations, yet we were too busy trying to just take it all in. At first, our group was the only ones inside, so we followed the path fairly leisurely. Unfortunately, another group arrived which spoiled our experience. Not only were they loud (which ruined the peaceful mood we had earlier), but they also wanted to go around very quickly as if they were on a race to the exit, putting pressure on us to move a lot faster than intended.

Going downhill was an uneventful affair. We were whisked away to our boat in no time.

Our next stop came quickly. We were soon on the floating platform waiting for a paddle boat to take us to Luon Cave. It was here where, if we wanted, we could rent kayaks and paddle around. However, my folks were definitely not up for this physical task, and I had no one to share a kayak with, so we went with the bamboo boat instead.

To be honest, there was relatively little to see inside the cave, which looked more like a lagoon to me, except that we could see the karsts a lot more closely. There were a few monkeys that caught our attention though. By the time we got out, a larger group of tourists were busy trying to secure themselves kayaks for their adventure.

Off we were to the next stop!

Of all the stops we were to have for the day, it was Titov that I was excited the most about. By the time we were about to anchor, I soon realized that it wouldn’t be as spectacular as I expected: the beach was filled with crowds.

My parents opted to stay aboard, as the 450 steps to the top weren’t exactly up to their alley. It proved to be a right decision, as the way to the top wasn’t exactly conducive for the many visitors to the island. The steps were too narrow that it could only accommodate one line of people going up and another line going down. You couldn’t simply stop and catch your breath, because that meant inconveniencing the people behind you. It was a massive deal since we were only given limited time (I believe it was only 30 or 40 minutes) to explore the island, so whatever few minutes of inconvenience meant a shorter time at the view deck, or you risk getting late for your boat.

Despite feeling breathless, there was no time to waste. It was time to take in all the impressive views. The limestone karsts sprung up like mushrooms on the tranquil bay, with the cruise boats being the only eyesores on the natural landscape. There was a quite a crowd at this modest hilltop shade and, unfortunately, some were hogging the spot with the most spectacular sight. Moreover, the wild grass surrounding the area were getting a bit tall and it was somehow tricky for someone short like me to capture this serene beauty. Nonetheless, the vista was magnificent, and I would urge you to ensure that the Titov (or Titop) Island is included in your Ha Long Bay cruise.

The sun was getting down by the time we left the island. We headed to the unshaded upper deck to relax and to take in the vista for as long as we could. It had been a wonderful day trip, and I had a blast with Paradise Cruises.

More on Hanoi next time. Until then, happy (virtual) travels!