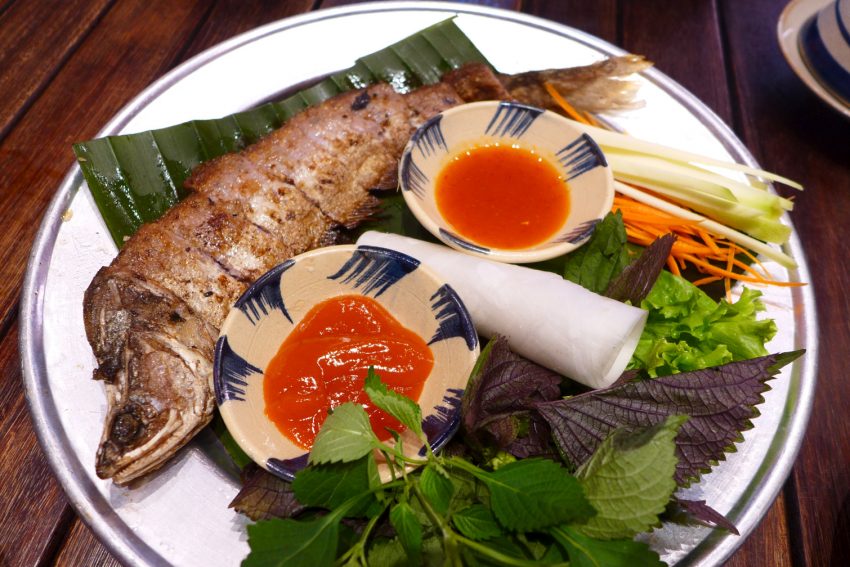 Despite being geographically close to Vietnam, I couldn’t say that our neighbor had such tremendous influence on our cuisine. I didn’t grow up consuming vast amounts of pho or banh mi, much less heard of the other dishes we had tried in its capital city, Hanoi. With the exception of our mutual love for fish sauce, there’s very little I knew about the cuisine.

Our few days in Hanoi definitely wasn’t enough to cover the country’s cuisine, but it was enough to entice me to discover more of their food. In general, theirs was a typical Southeast Asian mix of salty, sweet and spicy (I couldn’t remember tasting a lot of sour dishes), with a very distinct attention to the use of fresh herbs and leafy vegetables. The cool weather of November was a great time to try some of their noodle soups and cups of coffee. Here were some of our favorite dishes:

The ubiquitous pho, a beef soup with flat rice noodles, would forever grace any list of things to try in Hanoi. We were lucky to have sampled it at one of Hanoi’s best, the shop located at Bat Dan. The line could get long as the day passed on, but we were there very early in the morning.

To be honest, the bowl wasn’t exactly screaming in strong flavors, but an addition of fish sauce brought out more of that beefy umami I was looking for. What I enjoyed more was dipping those elongated doughnuts in the soup: an experience I never had before.

To be completely transparent, I was never a lover of pho to begin with. Did the bowl from Bat Dan changed my stance? Nope. But in my limited pho-eating experiences, it was the best I ever had.

Admittedly, Bun Cha Dac Kim’s wasn’t regarded as the best, yet it was convenient to get to and was still quite reputable. It was enough for first-timers like us.

Unbeknownst to me, I would fall in love quickly with this other Vietnamese noodle dish. One sip in and the sweet broth already tickled my taste buds. The sausages or meat balls provided some texture and a lot of flavor, while the towering choices of leafy vegetables and herbs brought freshness to the thin noodles dipped in the broth. A dash of fish sauce and a bit of chili made my bowl an extremely powerful grub. I truly enjoyed this bowl (yes, more than its famous sister, pho).

The nem cua, or the spring rolls, was a pleasant textural accompaniment, although it terribly lacked flavor-wise. Had these fried rolls tasted better, this would have easily been my best meal in Hanoi.

This French-influenced sandwich was the dish we ate the most while in Hanoi, since it was an easy snack and was available everywhere. I did not really expect much of this sandwich, but it surprisingly it was quite good. To me, sandwiches are about the proper ratio of filling and bread, and all those that we tried had such generous portions of meat fillings and herby toppings that I never felt that the sandwich was drowning in bread. The baguette was less crusty than I anticipated; this was Asia, however, where soft, airy bread was more prominent.

This dish was far from my radar until I watched a Delicious Destinations episode on Hanoi. The fish looked mesmerizingly good on TV that I knew I wanted to try it when I got to the Vietnamese capital. The only caveat was that it was loaded with dill, an herb that I was not accustomed to and, therefore, I was not particularly fond of.

This turmeric-tinged fish dish, cooked tableside turned out to be one of my favorite meals in Hanoi. The dill, though a bit overpowering to my taste buds, soon faded in with the spring onions, basil and mint, to provide a wonderful freshness to this otherwise lightly flavored fish. This fish, together with the slim noodles drenched in fish sauce and chili, was indeed a meal to remember.

Note: Cha Ca and Bun Cha were my two favorite dishes in Hanoi. I somehow think that the combination of thin noodles, fish sauce, chilis and fresh herbs was enough to make me enjoy these dishes, with the fish or the meat patties serving as bonuses.

Vietnam’s strong coffee was world famous, yet it was only on this trip that I got the chance to try it. I personally prefer some strong, sweet coffee, and my coffee encounters in Hanoi were exactly that: sweet because of the condensed milk and strong because of the Robusta beans they use. I enjoyed my very first cup that I was tempted to order a second one, which led to me feeling a bit buzzed as the night wore on. I never knew coffee had such effects on my body.

Hanoi’s signature coffee drink, however, was its egg coffee. The egg is whisked with sugar to create a foam that was then set atop the condensed milk and coffee layers. I did not enjoy it as much as the usual Vietnamese cup, but I’d be willing to try more coffee shops and variants of this some time in the future.

Food-wise, we had a great time in Hanoi. Despite being not familiar with some of these dishes, the food was amazing. Sure, some of the places we ate at weren’t exactly the prettiest or the cleanest, but a few had some of the greatest Vietnamese food we’d ever had. I could only wish I could go back sooner to have some more of them.

Until next time…happy (virtual) travels!