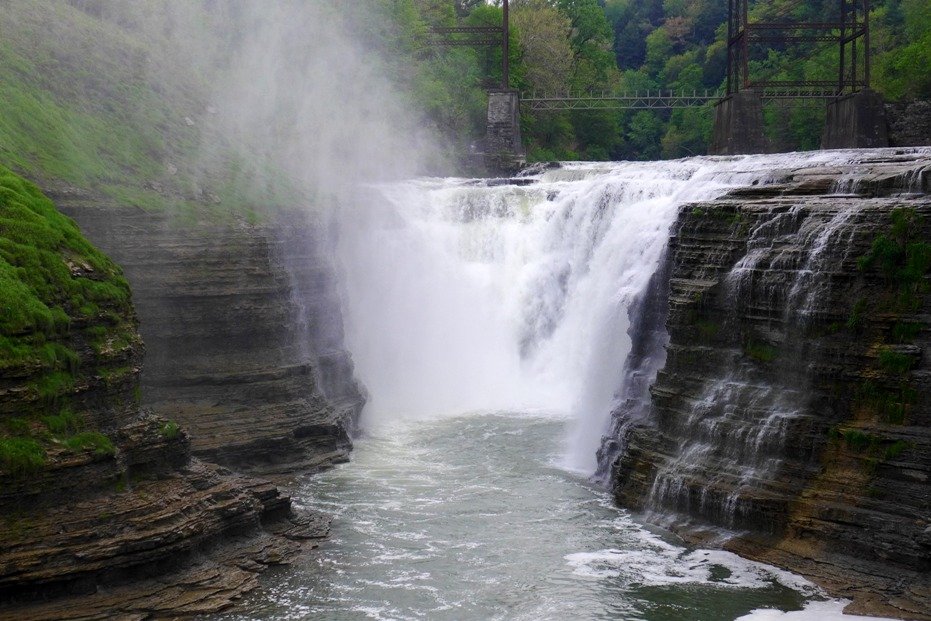 The beauty of going back to places you’ve once been to is the discovery of more places. I oncee read somewhere that the more you travel, the more you realize how much there is to explore.

It was our final day in Rochester, but the adventure never ends. Late in the afternoon, we drove past the mighty highways and headed to another body of water. Western New York is home to a lot of bodies of water, and I’m happy to have been to some of the most well-known ones. Niagara Falls? Check. Lake Ontario? Check. Finger Lakes? (At least some of it) check. Erie Canal? Check. But there was something else: the Genesee River.

Our quest was simple: it was to see the river and the falls on its southernmost tip as we traveled across Letchworth State Park.

It was overcast when we finally arrived in Mt. Morris, the town where the entrance to the state park is located. Nevertheless, we continued on our drive, hoping to see the waterfalls in full splendor.

Little did I know that the river was located in a gorge, and a dam was constructed just by the park’s entrance. The winding roads soon started, and the hilly slopes made the car ride just a little bit more challenging. Log cabins could be found, but they were scarce in numbers. Black squirrels ran across the roads as though it was their final accomplishment in life. Trees towered everywhere, but portions of the river could be seen once in a while from the road.

While we would have wanted to make a stop to view the river on every curve that had a picnic area, it was getting late. Everyone in our group was anxious whether we could make it at the end the road before the darkness fell. Hence, we drove past the museum and the restaurant, and headed to the Upper Falls at once.

It took us a little less than an hour from the entrance to get to the Upper Falls. There’s a short path from the parking to the viewdeck, but one where enough anticipation could be had before finally seeing this natural wonder.

Water emerged and cascaded along the rocky cliffs of the Upper Falls. It was as though a very big pipe burst and all the water in the city was concentrated in this place. A towering bridge mightily stood on top of the waterfall, an engineering marvel that fascinated my father. There were only a handful of visitors, but everyone was awestruck at how magnificent this view was.

As we were driving to exit the park, we passed by the Middle Falls and my cousin had a burst of memory recall, finally figuring out that it was that falls that he wanted us to see in the first place. We navigated our way back to another parking lot and trekked to this next layer of waterfalls.

The surge of water was as strong as it can be, but unlike the High Falls where the cliffs were on a bend, the Middle Falls poured its water on a flat and wide slope. The river above was lined with trees, and water sprayed all over as you get nearer the waterfalls. It reminded me much of Niagara’s strength, albeit I could say that Letchworth is one where I could keep on coming back. (Though ask me this again once I see Niagara from Canada’s side.) Here, it just wasn’t about the water, but a landscape in its entirety so lush and so alive that draws your interest.

The sun had already set by the time we left, but Letchworth gave us a bonus by sending some deer on our way before we finally said goodbye.

It was a great last day. Until next time, happy travels!