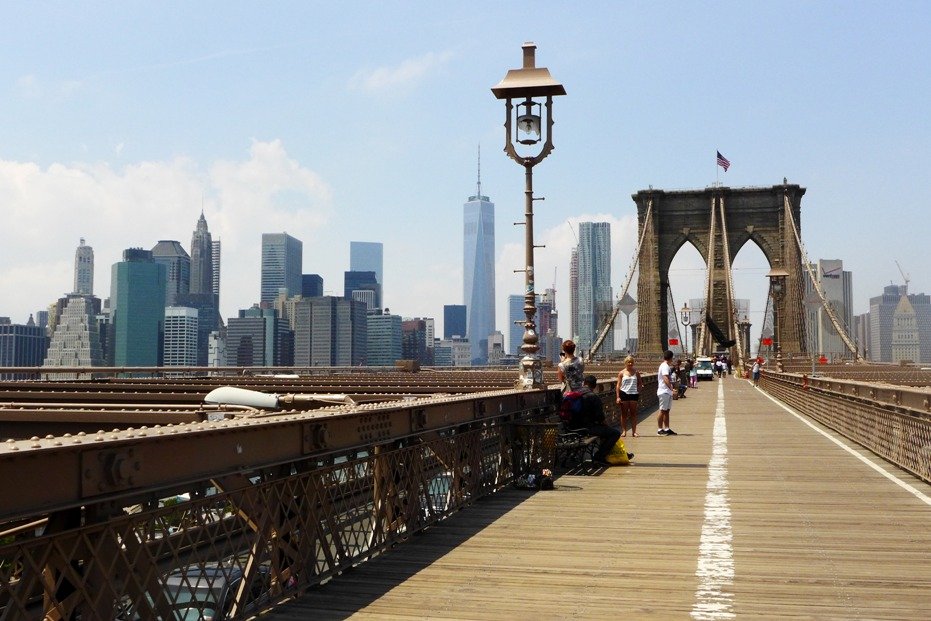 From Philadelphia, it was an easy 2-hour ride to New York City. It would be here where we’d catch the plane for a flight back home, ending our trip across America. I wasn’t really excited to see the greatest city in the world as dubbed by others. Rather, I wanted to see a side of it I would learn to love.

On my list of things to do in NYC then were few: eat pizza, walk across Brooklyn Bridge, see the 9/11 Memorial and go on top of a skyscraper. After a little bit of walking around Chelsea, we took the subway to Brooklyn.

It was nearing lunch hour already, I was getting worried that the line to Grimaldi’s Pizzeria would be long. Reviews on the internet kept saying how difficult it was to grab seats during this time. Luckily, not a single body could be found standing by the doorstep when we arrived. No queues. Isn’t it perfect?

The restaurant was nestled in an old building under the iconic bridge. Inside, patrons were enjoying their pizza slices. An open kitchen is situated by the entrance, with a large sign saying that the pies were only sold wholly, not by slice. Framed photos of celebrities who patronized the place were displayed on the restaurant’s brick walls. Typical of an Italian joint, tables were covered in red checkered cloth. 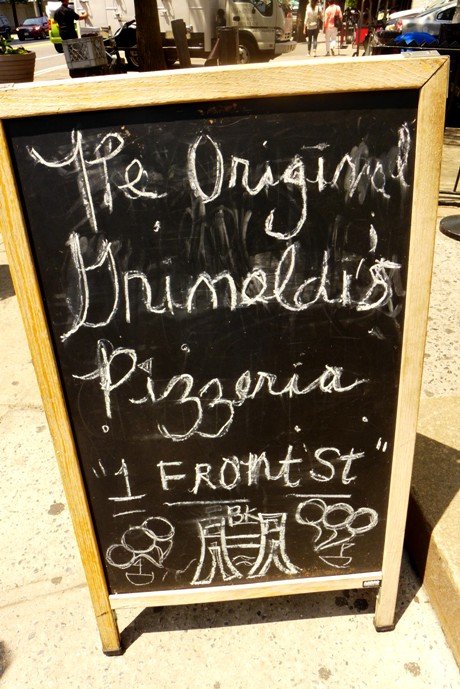 At first we only ordered one large regular (tomato-based) pizza and added Italian sausage as topping. It took a while before we were served, but the entire wait was worth it. The crust was thin, but not too thin, and it was not cracker-like. The combination of bread, cheese and tomatoes was already great, but the meat topping and the basil leaves added another level of excitement to the dish. Craving for more, we ordered another pie, opting for the white pizza this time around.

If I thought that the tomato-based pizza was great, the white pizza was heavenly. It was full of mozzarella cheese as you would expect, but theirs had a lot of mozzarella. Every bite was screaming with goodness as the creaminess of the cheese was delicately balanced with garlic. It’s very important to enjoy it while its steaming hot, as its greatness fades as it cools.

We left the resto content and stuffed with pizza. It would be awhile before I get another slice that good.

From Grimaldi’s, it’s a short walk to get to the pedestrian entrance of the Brooklyn Bridge. Though the early afternoon sun was anxiously radiating its power, a lot of visitors were still present. People crossed the bridge both on foot and on bike, but the paths were clearly marked which side you’re supposed to follow.

In mere five minutes, the skyline of Manhattan emerges. The bridge’s double gothic stone arches were massive, and the interlaced cables appeared weak in comparison. The historical landmark stood in sharp contrast to Manhattan’s modern skyscrapers — the old and the new in NYC.

Vehicles plied the road below the pedestrian wooden walkway. Workers walk along one of the cables, perhaps to check for its structural soundness. In a distance, the Manhattan Bridge stood almost parallel to the Brooklyn Bridge, as though battling for the top spot of best bridge along East River.

Soon, the Statue of Liberty could be found on the horizon, and so were a number of ferries serving several passenger routes. The buildings grew bigger as we grew nearer to Manhattan. On our right was Lower Manhattan’s skyscrapers, and on the left, Midtown and the Empire State Building captured eyes. Had it been a cloudy day, it would have been nice to stick around. However, the sun’s rays were already scorching hot, so we trudged onto Lower Manhattan.

I could only wish that I could cross this same bridge at night someday. It would surely be another fascinating view to behold.

Manhattan will be up next time. Until then, happy travels!