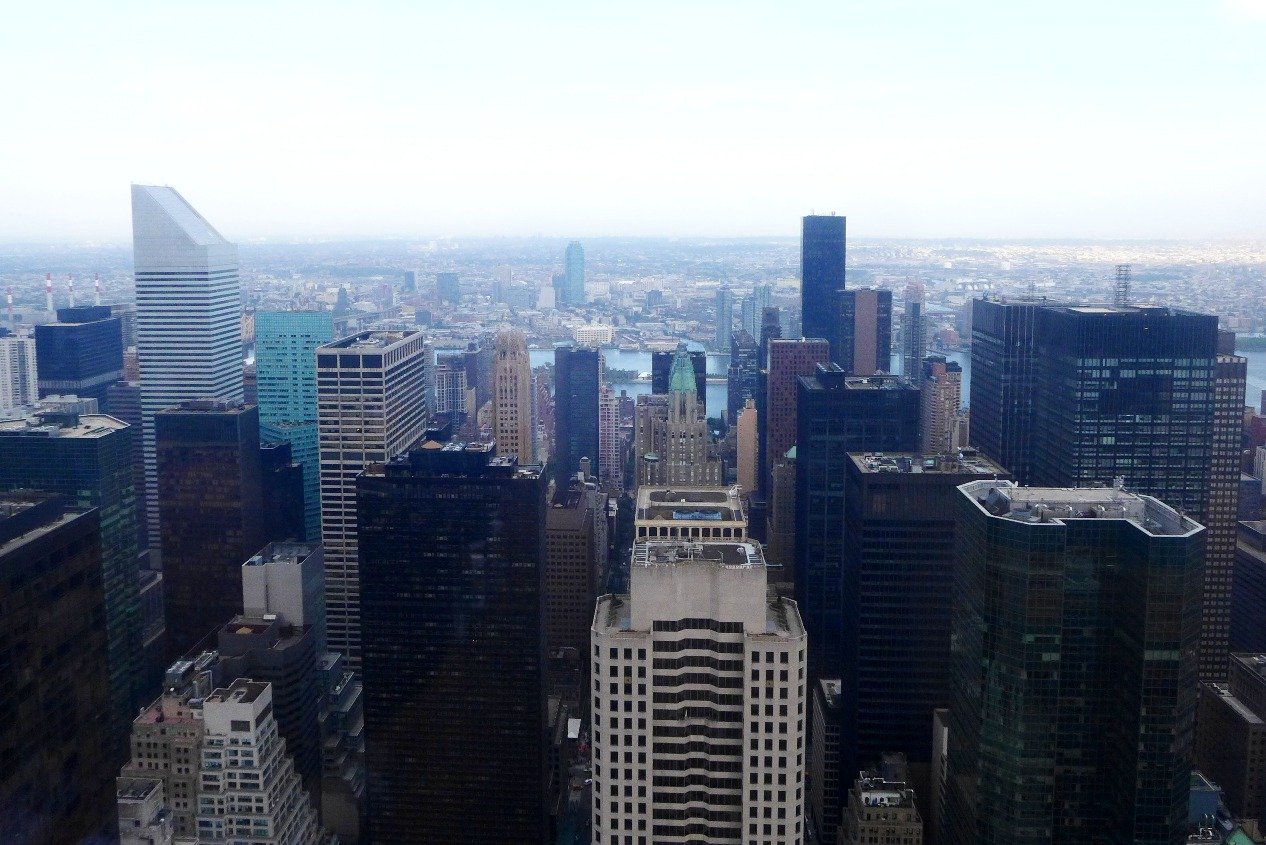 Because it was still early, we took the subway to Midtown. It’s here in Midtown where a lot of Manhattan’s tourist attractions lie: the Empire State Building, Central Park, Times Square, Rockefeller Center, St. Patrick’s Cathedral, and the Grand Central terminal. It’s also here where the three great art museums are situated: the Met, the MoMA (Museum of Modern Art) and the Guggenheim.

Having previously seen some of these architectural wonders on the ground, I decided to just spend the rest of the day viewing it from above. Hence, we proceeded to the Top of the Rock, an observatory in Rockefeller Center.

High-end stores dot Fifth Avenue as we made our way to the Rockefeller Center. A sculpture of Atlas marked our destination, but I chose to cross the street first and pay a visit to St. Patrick’s Cathedral on the opposite side of the street. It had gone through repairs and renovation; its façade is whiter than it has ever been.

Inside, the gothic ceiling and the stained glass windows would surely impress anyone. But if you wanted to pray, go somewhere else. It seemed like a tourist attraction more than a place for solitude and prayer — even lighting a candle costs $2! Tourists snapped photos of the interior, not caring if they’re causing distraction to anyone praying. The traffic outside seeped within the church’s walls, which was then amplified by noisy visitors. The only quiet place here was in front, where people knelt before the altar to pay respect.

Top of the Rock

I left the church and headed to the visitor entrance of the Top of the Rock, the viewing deck on the topmost floor of 30 Rockefeller Center. Though there were no queues by the entrance, we were surprised to find such a long line on the second floor, just after we bought the tickets. A film was shown about the Rockefeller Center’s history and its significance to NYC, all to alleviate the boredom of all those waiting in line.

If I only knew that such a long wait was needed, I would’ve skipped it and headed to Central Park instead. It took us about an hour to finally get to the observatory, which was painful especially we had too little time to spend here. Once we got on the top floor, we took the views in as fast as possible. Central Park lay at our feet, with the high-end apartment buildings bordering the rectangular park. The East and Hudson Rivers spanned on both sides of the island, as headquarters of multinational companies took up the spaces in between. We went around until we reached the other side of the glass-panelled outdoor observatory, where the Empire State Building now played the lead role in this stage.

To be honest, the Top of the Rock had some good views, but the best way to see NYC from up above is by the plane’s window. I was fortunate to see witness how fascinating this could be a few years back, where you could see Central Park’s greenery fully outlined by the concrete jungle. I guess that would be weather-dependent, though. But if you’re lucky, you’d get the greatest views of Manhattan.

Before the sun finally bid goodbye, we left the observatory. Clouds hovered in the sky; showers were imminent. Back at the subway station, a half-crazy man shouted his political views on top of his lungs, as locals and tourists crowded the platform. Just after exiting the subway, I took my last peek of the Empire State Building and said goodbye…at least for now.

I will go back…

As I said before, I do not see myself living in NYC, and that thought did not change after this visit. But I know I will be back. I have yet to see the Guggenheim and the MoMA, to eat pastrami from Katz Delicatessen, to traverse the High Line and to feel the rush in Wall Street. And I would gladly cross Brooklyn Bridge again, under the stars, with a lover in tow.

(Besides, most Asian airlines flying to the east coast only land through JFK, so a stopover here in NYC would be a must.)

This ends my glorious two-month trip across America. Oh, how I enjoyed it! =)