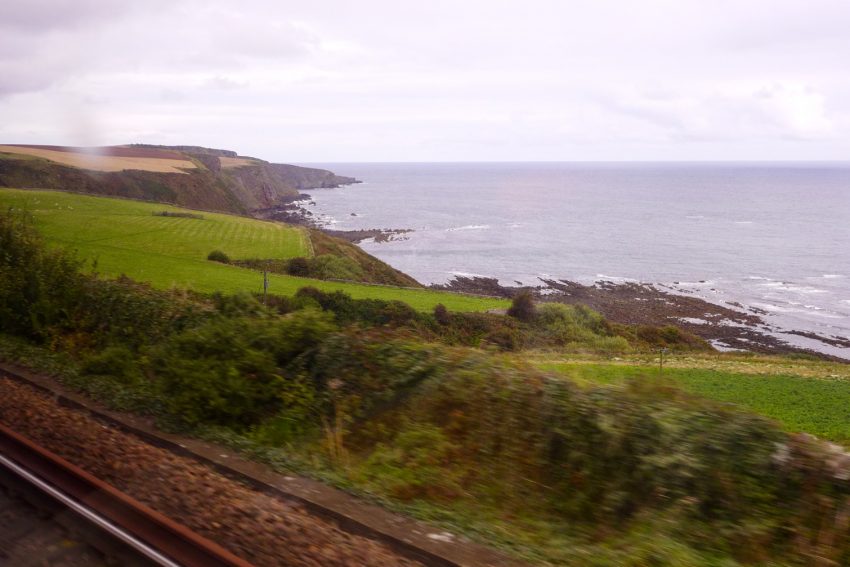 As the weeks rolled by into our UK stay, we had the opportunities to see the country’s other major (and historical) cities. We were able to explore Edinburgh, to catch a glimpse of Glasgow where we joined a tour to the Scottish highlands, and to visit Cambridge’s rival, Oxford. Admittedly, Cambridge wasn’t the most ideal base to get around the UK. Sure, you can be in London in an hour, but reaching other major cities required more careful planning. Tickets had to be reserved in advance as prices soared as the trip date drew near. Moreover, a change in train was almost always needed to get onto the main lines that serve the country from north to south. For a time, we left the idea of getting on a train from Cambridge to Edinburgh as prices were just too high, but as luck would have it, we were able to score a pretty good deal one day.

It was still dark when we left Cambridge. It was still dark when we changed trains in Stevenage. I took this opportunity to get some snooze before the sun rose, because once it did, I couldn’t peel my eyes off the window. Not that the views were extremely beautiful, but that riding the train while watching the scenery unfold had an allure I could not resist.

A lot of people would have been bored by the vista — endless farms and agricultural land — but I was amused by the differences between the UK countryside and that of my country. Cows took on different colors: spotted white and brown, brown, black, and spotted black and white. Sheep grazed on the green grass that looked so lush. You see, I had never seen such abundance of sheep and they looked so cute especially those with black heads. Also, the grass where animals in our country grazed never looked that pretty; no wonder our livestock were so skinny! Round bales of hay were scattered on empty lands; others were even perched on rolling hills. The countryside views changed from sheep to hay, from hay to cattle, sometimes a mix of them.

We passed by several beautiful stations, including that of York. Its platforms were so endearing — the iron columns with the decorative fascia boards were all reminiscent of the more glorious days of train travel. The platforms were almost empty. I wasn’t sure if we were there at a less hectic hour or if train travel wasn’t the preferred mode of transportation anymore. I wish it was the former, as I couldn’t imagine travel without trains.

Apart from the countryside scenery, there were few other iconic sights on this train route. The Durham Cathedral, though partially covered by scaffold at that time, still radiated its magnificence even from a distance. The Angel of the North, or the Newcastle Angel, was soon into view, standing proudly from up above the hills. Before long, we rolled into Newcastle station, which was also a pretty sight to behold.

From there, the train took on a scenic seaside route, making my first view of the Atlantic possible. It was shortly cut by a view of an aqueduct-like bridge hovering around a residential area. The train took a curved approach to the station of Berwick-upon-Tweed, which allowed us to see the concrete bridge and the town landscape.

It was then followed by more views of the sea, but this time, Scotland’s craggy cliffs took the place of the sandy shores. Charming stone houses delighted me along the way, before we finally pulled into Edinburgh Waverley.