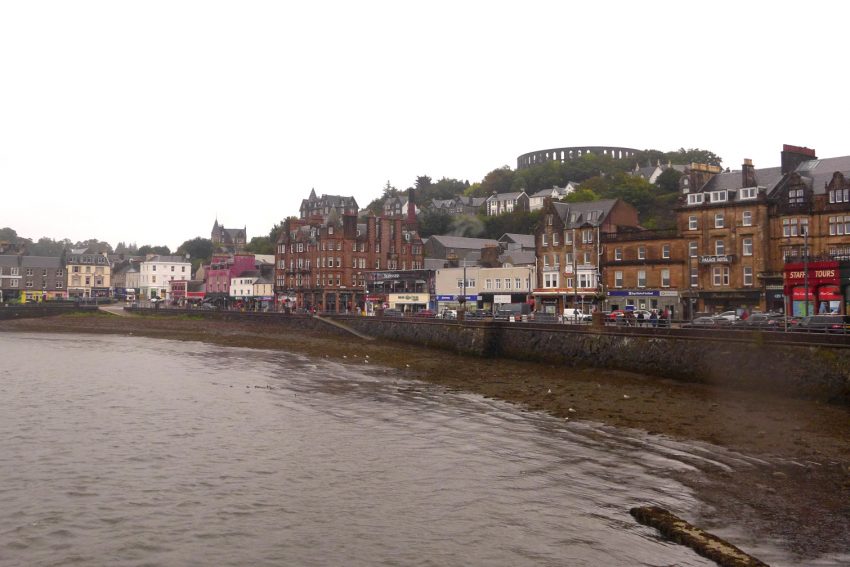 Departing Loch Awe, we were finally on our way to Oban, the seafood capital of Scotland. Though still not a very big city, this was by far the largest town we visited among the others. This was where we were scheduled to stop for lunch, and this was the location, according to Rick Stein, of the best fish and chips he ever tried. Our guide pointed to us the fish and chip shop as we drove to the drop-off place. I had already checked this on Google Maps earlier, as it was also another one of the exciting things I planned on undertaking on this day tour. Oban Fish and Chips was the name of the shop, and its humble storefront was no match compared to the quality of food they served.

It was still raining as we walked into the shop, but we were quickly seated. True to being the seafood capital, no meat could be found on their menu, and they presented the widest array of seafood I had seen in any of the British places we dined. Of course, our orders consisted mainly of fish and chips, using traditional cod and haddock, though in varying sizes. My parents ordered theirs in mini, while my bother and I ordered the regular. We also ordered some apple juice, which was really, really good. When the orders came in, the servings were very generous. In fact, there was just a small difference in size between the regulars and the minis. Upon first bite, the crispy coating was offset by the tender fish. It was not greasy, and the batter was very light. It was easy to see how one of the UK’s prominent culinary figures said that this was the best fish and chip shop he ever tried. We enjoyed this sumptuous meal until it was time to leave, back to the open, rainy air of Oban.

Had it not been raining, it would have been enjoyable to walk along this main street of commercial shops. From downtown, we were able to see McCaig’s Tower, a building resembling that of Rome’s Colosseum. This landmark would have offered a view of the town and the surrounding islets, but walking to the place in this terrible weather was a feat we were unwilling to undertake. We headed toward the train station instead (where our van would be waiting for us), while taking in the sights around the port. Oban was simple and serene, yet it had some of the comforts of a lively city, which made it truly a remarkable place to visit.