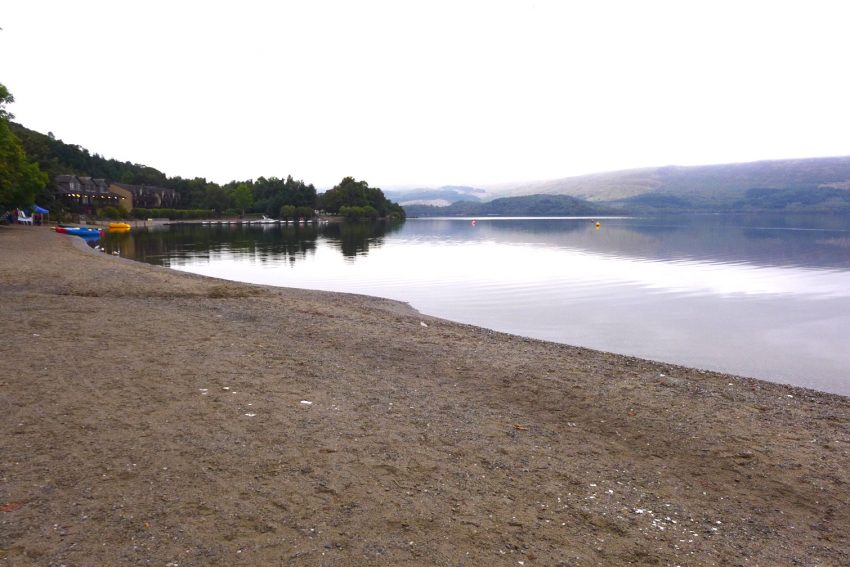 We left the waking city of Glasgow and entered into motorway before finally heading to our first destination of the day. Contrary to the schedule, our guide decided to do our itinerary in reverse, as he felt that it was the best use of our time considering the gloomy weather. This meant that our first stop would be Luss, a conservation village by the shores of Loch Lomond.

Though I generally prefer big cities than small, sleepy towns, I couldn’t help but be fascinated in cute, little villages or even small lanes with a cohesive, historic architecture. I’m enamored by the likes of Takayama’s Sanmachi Suji, Kyoto’s Sannenzaka and Ninenzaka, Singapore’s Chinatown, Little India and Hajj Lane, Seoul’s Bukchon Hanok village or even our very own Calle Crisologo, an alley of old houses in Vigan. My excitement grew as we drew nearer to the village. It would be another one of those attractive locations.

Upon arrival, we headed down the trail that led us to the shores of Loch Lomond (Loch means lake in Scottish). The lake was tranquil even if the weather wasn’t exactly as its best. Unexpectedly, I found the lake to be beautiful; not dead-droppingly gorgeous, but its serenity had a certain allure. I would presume that the grey skies and the hilly backdrop contributed to the romance of its beauty. Devoid of visitors during our visit, this appeared to be an idyllic spot to get away from the hustle and bustle of the city. It wasn’t hard to imagine spending a few days here. Maybe sipping a hot drink on a bench or strolling by the shore would be wonderful activities. No wonder there were a few kayaks by the coast — perhaps in better weather, it would have been a delight to traverse the lake in one. Ducks swam peacefully, a seeming reminder that time could stand still. The small pier was empty; today wasn’t the best time to explore the waters, and so boats were parked by the water’s edges.

Luss’s main street was dominated by rows of dwellings resembling one another. Stones stacked together made up the facade, with chimneys butting out of the tiled roofs of the single-story houses. Each hinged wooden door was decorated with some potted plants and hanging planters, adding to the charm that this place was brimming with. Some houses even have tiny front yards, and their well-kept gardens spoke highly of their owners. It was cuteness overload, with some sense of culture and history: it was certainly my cup of tea.

With it being such a small village, it was a just a few steps to get to the General Store. After making a right turn, we saw a few bed and breakfast establishments, though these buildings melded to the village’s lovely atmosphere. From here, it was just a short stroll to get back to the lot where our van was parked. Off we were to our next destination.