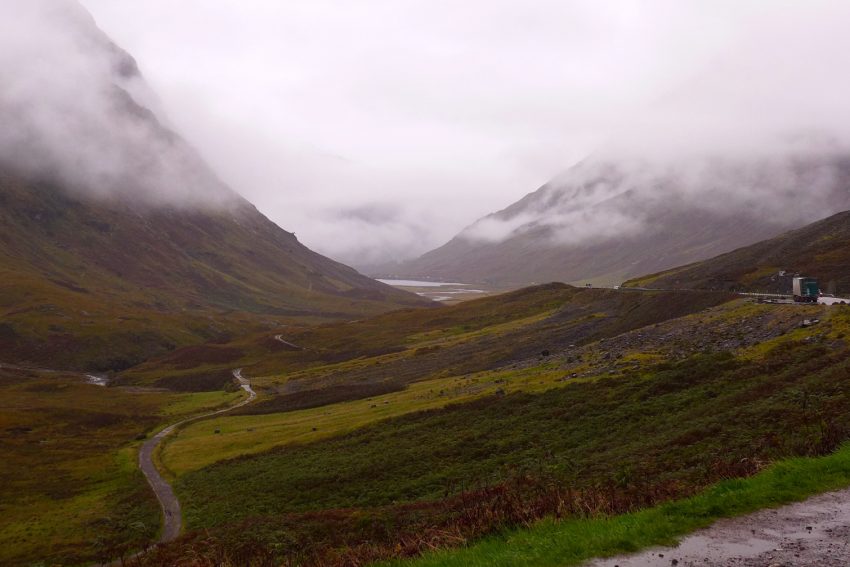 Leaving the relatively busy town of Oban, we were headed to the main event: the mountains of Scotland. Though we were able to glimpse a few mountains here and there as we maneuvered our way around the highlands’ many lakes, nothing could compare to the sights that awaited us later in the afternoon. You see, unlike many mountains I had seen, the mountains in Scotland had no trees. The slopes were steep, with some rocks puncturing its carpet of low grass.

But first things first: another castle visit was in the making. Well, it was not exactly a visit. Rather, it was a brief stop at a viewpoint overlooking Castle Stalker. Much like Kilchurn Castle, this once-fortified building was now in ruins, yet its hilly backdrop was magnificent. The ruins stood on its own islet, with bodies of water playing around it. Even on a grey day like today, the scenery was beautiful. Indeed, Scottish landscapes like this make me want to see this part of the country more.

After a few photos, we were back on our journey. Unfortunately, the weather turned even worse. We were headed to Glencoe, a Scottish village famed for its scenic mountains and the site for the infamous massacre in 1692. As we pulled in the parking lot of Loch Achtriochtan, the rain was heavily pouring. It did not stop us from getting down the bus to admire the craggy peaks. A very charming house stood below the mountain range, and since it was pouring, a waterfall was cascading from a middle height. The lake, reflecting the grey skies, was nothing to write home about, but the slopes framing it were extraordinarily attractive. No photos could capture the grandeur of these mountains, and I was just in awe and very grateful for having the opportunity to visit a place such as this.

Our next stop was the Three Sisters Viewpoint, aptly named for the three connected ridges. In a heartbreaking turn of events, fog had descended and the peaks of these mountains could no longer be seen. The Glencoe Valley, as many pictures showed were taken from this place, was now obscured by the fog. Luck was not on our side this time around, but you couldn’t win them all, right?

We continued traversing the Highlands, seeing more mountains and valleys, until we see Rannoch Moor, another beautiful landscape in Scotland. By this time, the rain finally stopped, but it was now getting a bit dark (I always feel that the sun sets earlier in the mountains). We made a final break at one rest stop, before heading back to Glasgow. I took this time to stretch my legs, but I was surprised to find this to be another pretty place, especially as my eyes were drawn to an arch bridge by the waters. In time, we were back in Glasgow, where our guide kindly dropped us at the train station instead of the usual drop-off point (yes, it was raining again). We had our dinner as we waited for our train back to Edinburgh.

P.S. Would I do this trip again? Hell yes. It was one of the most memorable days in our time in the UK. Though we were a bit unlucky with the weather, we had some luck with our tour companions. Most of them were kind and friendly, but the big group of ladies were “always late”, as the Romanian guy said. Moreover, they have a tendency to treat the guide as their own, and boy, were they loud. It makes you wonder how a 3-day tour group would go when you’d be with people like them. I had a great time with the small-group tour with Rabbie’s. The only real complaint I had was I couldn’t intently listen to the guide as I was busy staring out the window, plus I had to process the Scottish accent in my head. All in all, it had been a wonderful day. Money well-spent!