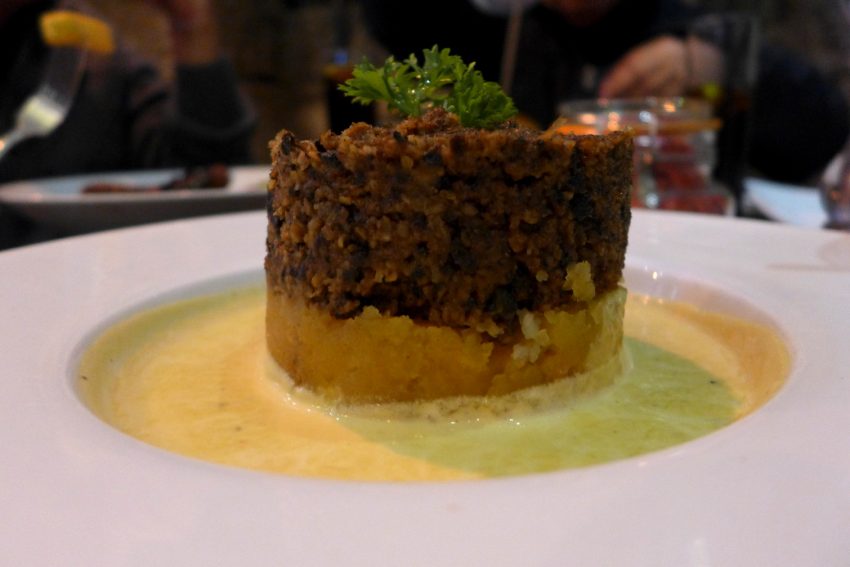 Apart from the magic of Edinburgh’s architecture, it was their food that charmed me. Quite frankly, I was not familiar with Scottish cuisine prior to our arrival in the UK. My brother mentioned this fantastic dish — which turned out to be haggis — that he once tried when visiting Edinburgh. He said it closely resembled the flavors of bopis, a Filipino dish primarily made of pig’s innards. The flavor profile should be the same; after all, both dishes were made up of internal organs.

But let’s kick off where it all began: the day we arrived in Scotland. After the rather lengthy train journey, it was time for lunch. We headed to what seemed to serve the quickest meal: a pie shop. The Piemaker was not on the Royal Mile, but was on busy South Bridge. This area of Edinburgh felt more like a thriving city than the old town that the Royal Mile represented. The Piemaker was a small shop, but the pies weren’t lacking in variety. We ordered the Original Scotch pie, the Steak Scotch pie, the Traditional Pasty and Steak and Ale pie. Upon the first bite, I was in love. The crust was flaky and tender, and I had never had a pie crust as good as that. The filling were also flavor bombs, but some more than others. I particularly liked the traditional pasty as its filling perfectly complemented the great crust. I also preferred the Steak and Ale pie over the Scotch pies. Overall, this shop has great pies. So good, in fact, that we came back on our last day to buy some more pies for our train journey back to Cambridge. To round up our pie testing, we ordered the cottage pie, which was the first cottage pie I ever tried, and I was surely not disappointed.

With the bar set high, I was sure that I was set up for disappointment with other foodie destinations. But Edinburgh proved me wrong. The next day, we woke up early to head to Edinburgh Larder, a breakfast spot just off the Royal Mile. When we arrived, no tables were available, but they were kind enough to offer us seats at their cafe next door while we waited. I only had one dish in mind: the Scottish breakfast. Lo and behold, the plate was filled with tasty proteins — black pudding, ham, sausages, eggs, and beans — that left me full up until late afternoon. The meal was great, everything was seasoned properly. The only difficulty was only finishing the humongous serving.

On the night of that same day, we reserved a table at the Arcade Bar, a famous restaurant known for its haggis. This was my first formal introduction to this well-known dish, and I was excited to finally get the opportunity to try it. I ordered it in Princess Diana style, which was in cream sauce, with the traditional nips and tatties (turnips and potatoes). It took a while before our orders arrived, and the haggis did not disappoint. The flavor was intensely meaty, but had the richness that only internal organs could bring. For someone who grew up on this flavors, it easily captivated my heart. The only slight dissatisfaction I had was that I couldn’t finish the plate as the richness of the sauce proved overwhelming with the haggis. Perhaps if I ordered something acidic to drink, or if I had stuck with the original whiskey sauce, it would have cut down the fattiness, or perhaps the dish was just too big for me to finish. But all in all, it still was a great meal.

Before we left Scotland, we also had the chance to try their fish and chips, a fried variant of the haggis, and a fried Mars bar. Not a big drinker, I opted to have some whiskey in my coffee rather than straight up, during our brunch shortly before leaving Edinburgh. But this list would’ve been incomplete should I not mention the Scottish shortbread, which wonderfully welcomed us in the apartment during our stay. The brand was Walkers and it was good, but we had some from the Shortbread House and it was, at least to us, better. We bought more Scottish shortbread to bring home, only to find our local supermarket carrying the Walkers brand a few months later.