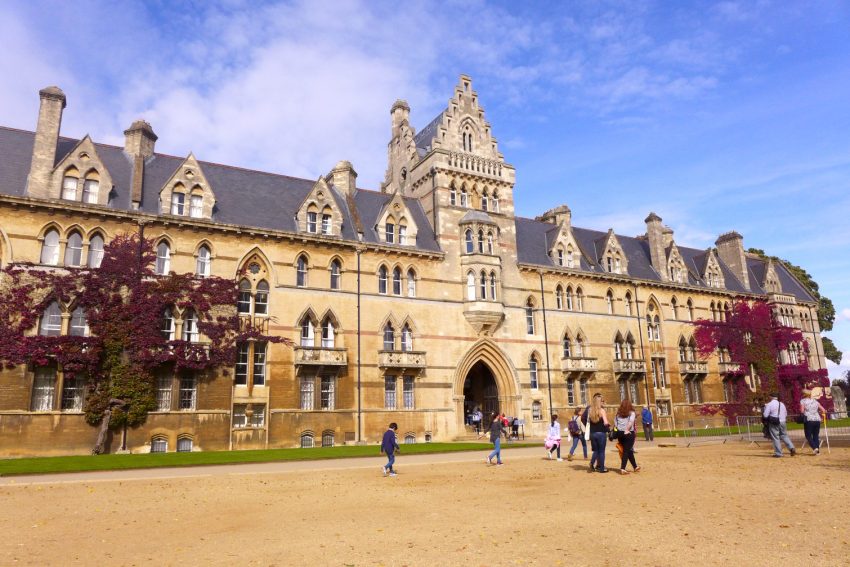 The Christ Church College was the exception in our hop-on, hop-off bus tour; it was the only college we explored. Though the gate was intricately designed, that view from the street was nothing in comparison to the awe that struck me once I entered the grounds. A garden with blossoming flowers welcomed us. It was very pretty: it even inspired me so much more than the Royal Gardens at Kew. A short walk later, the building near the meadow greeted us with its facade covered in a deep red ivy. Although a lot of people wandered around the grounds on this sunny day, entering the buildings was another story. Only a small handful of visitors were present, adding to the solemn ambiance that enveloped the place: you could surely imagine how it was like to walk around here during exam season.

In no time, we were approaching the staircase that led to this college’s star attraction. I was mesmerized by the fan vaulted ceiling above the stairs that led to the Dining Hall, as unlike many churches and cathedrals, this was rather low, allowing me to see the sandstone wonder with greater scrutiny. The Dining Hall, made famous by the Harry Potter movie, was less of an experience for me. First, I admit that I am not a Harry Potter fan (I’ve only read the first four books, and haven’t watched all the movies.) Second, the room was mostly cordoned off; there was a very small space in which you could “go around”, but it was basically a viewpoint. The wooden wall panels and the ceiling beams were magnificent, while the lamps on the table added romance to the scene. It was a quick peek; we snapped a few shots and we were out.

The highlight for me, however, was its Cathedral. Unlike the dining hall, I had never heard about the cathedral, and it was a pleasant surprise. I particularly enjoyed going around the quire, with its wooden seats and dimly-lit lamps.

We continued on our bus tour and got down only once more for the Radcliffe Camera. We were passing through the Sheldonian Theatre when a man called out, “Out!”, shooing away everyone on the grounds, as it was time for closing. That was one of the rudest interactions I had witnessed in the UK. It was a shame that we were not able to get on the top level of the Radcliffe Camera, but it was still worthwhile to view this round building with a beautiful dome from the outside. Before heading back to the main street to wait for the bus, we had a quick photo stop at the Bridge of Sighs.

We headed back to the station to catch our bus back to Cambridge. We were well on our way when, during one of the scheduled stops, the door just wouldn’t close entirely. It came to me as a surprise that the bus didn’t continue on its journey when the door wasn’t shut. [I live in a country where some buses keep their doors open when the bus is brimming with passengers — whether the doors were open or shut wasn’t too big of a deal.] As we were anticipating a longer delay, some passengers opted to take the emergency exit through the window at the back. Luckily, it was all resolved in an hour, and we got back in Cambridge with no further trouble.