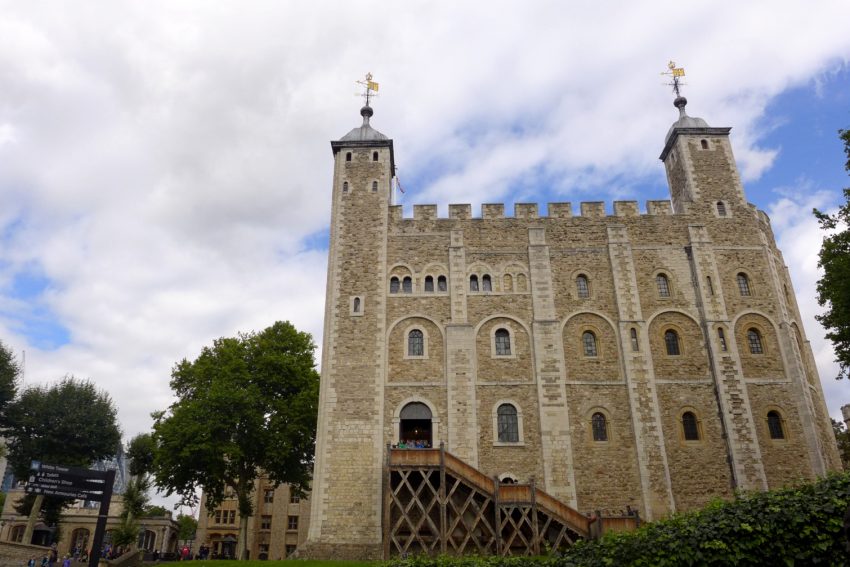 The morning rush was still on when we left our dwellings the following morning. The bus we took was full of suit-cladded bodies, a striking contrast to our casual outfits for the day. Our bus was headed to the City of London, the historic part of the metropolis. As we made our way to the Tower of London, we passed by Paddington station, where more people in suits gushed out of the station.

The Tower was still closed by the time we arrived. We grabbed a bite first at Paul, a boulangerie overlooking the River Thames. After breakfast, we decided to take a short stroll at the riverbanks, and took photos of the Tower Bridge while we had the view to ourselves.

We then saw the guards ceremoniously opening the palace. We were headed to the building housing the Crown Jewels, though we had the opportunity to snap a few photos of the grounds without the crowd. Two Yeoman Warders were standing quite close to us, so I asked if I could have a photo with them. Fortunately, they agreed, hence one of my most memorable photos on this trip was taken.

Ravens flew around; these historic grounds were their home after all. The Queen’s House, a set of timber-framed buildings, occupied a portion of the castle, revealing a sense of domesticity to this military stronghold. A marker was placed where executions took place, which, ironically, stood a  short distance away from the chapel.

We finally made our way to the building where the Crown Jewels were displayed. In majority of the rooms, a number of paraphernalia used in royal events, such as baptisms and banquets, were exhibited. A film showcasing the coronation of Queen Elizabeth II was playing in one of the rooms. The highlight for me, though, was the room where crowns of monarchs were on display, along with the tiaras of their spouses. Our early entry meant that there were fewer people around, so I had more than one opportunity to see the jewels. My first go dazzled me with the sheer sizes and clarity of the gems found in these head adornments as seen from the front. On the second go, I took the opposite aisle to view the crowns and tiaras from the back. The last was to take a final glimpse at them from the front, as well as to read the descriptions in more detail (or as quickly as I could, as I was standing on a walkator) corresponding to each one.

Two crowns were displayed separately from the rest, the St. Edward’s crown, which was used for the current monarch’s coronation, and the Imperial State crown, which the queen wears for the opening of the Parliament. On the way to the exit, the cases used in transporting these jewels were shown on display.

We attempted joining the Yeoman Warders tour, but there was already a big crowd by the time we arrived at the assembly. Being at the back of the pack made the guide’s anecdotes difficult to listen and understand, so we drifted off and wandered around the grounds ourselves.

The White Tower was main keep of the castle. Armors were on display here, but as I was deathly scared of life-like models in tight spaces, I left visiting the museum out. We simply admired the tower’s architecture from the outside.

We continued wandering around the grounds — staring at the various historic buildings surrounding the White Tower and seeing the large sculptures that were commissioned to represent the animals that used to inhabit this fortified space. We also learned more about the ravens at the cages located near the White Tower, right before the exit. Unfortunately, we were not able to explore the towers on the fortification walls, nor walk on these walls themselves, as my father’s foot had begun acting up.

We then bid goodbye to this magnificent location, with the hope that we could revisit one day to dwell more on the castle’s history. Upon exit, the view of the Tower Bridge emerged, along with the Shard which stood across the River Thames.

More on this third day in London next time. Happy travels!