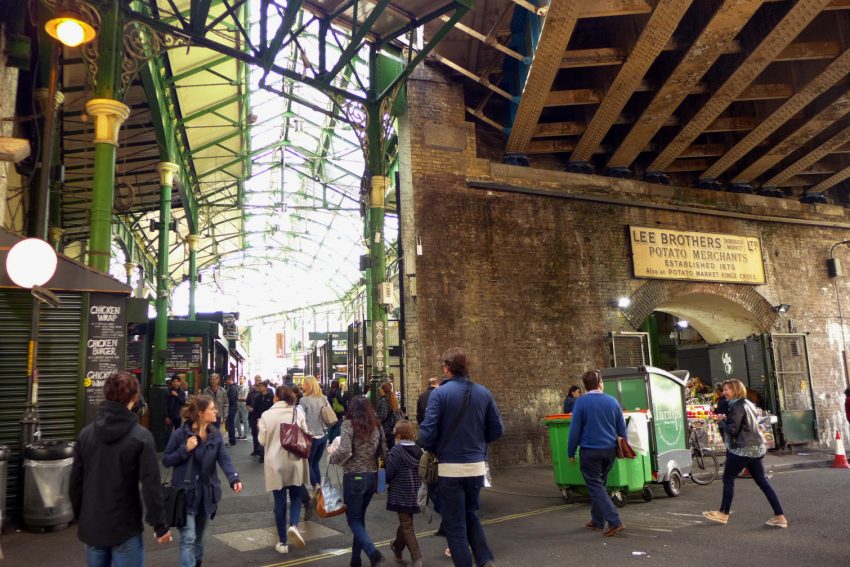 From the royal stones at the Tower of London, it was a short cab ride to the city’s culinary gem: Borough Market. Though some critics claim that the market had now become a tourist magnet rather than a local find, it was no denying that this place was abuzz with some of London’s tastiest treats. Different establishments catered to varied tastes, but almost everywhere we turned, there were bread, cheeses, cured meats, preserves and pies — all representative of British cuisine staples, and frankly, a perfect assortment of goods fit for a picnic.

While we took the opportunity to bring some goods home, we devoted our limited time here to sampling the hot food options. Here were some of our stops:

Our first stop was a cheese store specializing with raclette cheese. Two melted cheese options were available: on potatoes or a toasted sandwich. We went for the latter one, as the mountain of grated cheese and the stacks of cheese sandwiches ready to be toasted were just too difficult to resist. It was piping hot when we got our order, so we had to wait a little else our mouths be burned, but that little wait was worthy of the creamy goodness oozing out of the now-crispy buttery bread. It was delicious, and a great start to our Borough Market discovery.

I had heard of Roast from Andrew Zimmern’s show, but we weren’t there for Sunday roast, so we satisfied ourselves with the stall available at the ground level. It was my brother’s favorite find when he visited the market previously. The roast pork sandwich had a juicy, tender and flavorful meat, and perhaps instantly reminded me of lechon (which is roast pork in the Philippines), although on a roll. It was really, really good, that I wanted another serving but doing that meant less stomach space for food to try, so we moved along.

Our third stop was Brindisa, a shop specializing in Spanish foods. Outside was a grill station where we ordered a chorizo sandwich, complete with arugula and roasted peppers. It would have been great, had I chosen to double the amount of chorizo. I’ve always believed that great sandwiches come from a good ratio of bun to filling, and that single chorizo failed to substantiate that much bread. Had I ordered a double chorizo sandwich, it would have been fantastic. While waiting, my brother picked up some Jamon Ibérico for us to try at home.

Inevitably, any food trip would be without fail. That to me was Le Marché du Quartier’s confit duck wrap. It was dry. I shouldn’t be surprised by this, as the shredded duck rested on the griddle. It was already mid-afternoon by this time, and the constant reheating rendered the duck meat truly lifeless. Maybe if I had it earlier in the day, it would have been good…

By this time, we finished our hot food tasting. We walked around to find Scotchtails, a Scotch egg specialist, only to end our efforts in vain. We ended up buying Melton Mowbray pies and scotch eggs from Mrs. King’s to bring home. I’m happy to report that both of which were quite good.

There were a few shops in Borough Market where we didn’t get to try at the time, but we tried in a different location, that is, in Covent Garden. Bread Ahead‘s donuts were some of the best, especially their caramel filled ones. Monmouth Coffee also had good lattes and cappuccinos, and deserved to be called one of London’s best coffee. I still beat myself for not buying cheese from Neal’s Yard Dairy at Borough Market, since I thought that our subsequent stay in London would provide an opportunity to buy from the main shop. It turned out that our days sightseeing meant that the shop was still closed by the time we leave the apartment and it was already closed by the time we got back, so even if the shop was a very short walk away, we truly missed the chance to sample some Britain’s finest cheeses. Oh well, maybe on a different trip.