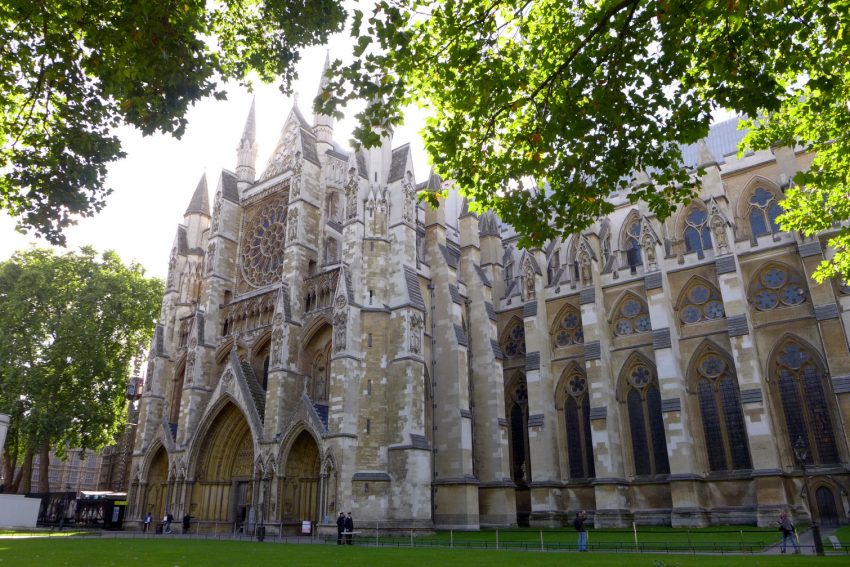 From where we stayed, a bus change was needed to get to our morning destination, the Westminster Abbey. Trafalgar Square was eerily quiet at that early time of day. Pigeons mostly took over the plaza, and a few buses plied the surrounding streets. Without the crowds, it was a perfect opportunity to capture the beauty of the National Gallery just behind the Nelson’s Column and see the landmarks beyond some of its axial roads.

We rode the bus again and headed to the Westminster Bridge. From here, we once again viewed the River Thames, while admiring the Palace of Westminster, the Big Ben and the London Eye this time around.

It was a quick walk to Westminster Abbey, but as it was an expansive place, we decided to have something to eat first before heading inside. The Parliament Square was more than an adequate place to have some bites while watching people around.

By the time we were ready for the Abbey, more than a few fellow tourists had begun flocking its entrance. The church’s exterior was remarkably ornate and brimming with history. The small entrance by the side was humbling compared to the grandness you experience upon entering. In spite of the crowds, it was easy to get lost in your own little bubble as you crane your neck to witness the Gothic arches of the ceiling or to view sculptures in more detail. This church was magnificent, far grander than anything I had seen so far. Looking at the nave reminded me of royal processions, be those coronations or weddings. The tall posts served as a quiet audience to landmark moments in history, while the floors served as final resting places of some of the most prominent figures in British history. The tombs placed around the nave were new to me, especially that some even had life-size sculptures on top. Sir Isaac Newton was truly honored in his decorated tomb, while Charles Darwin and Ernest Rutherford had more modest graves.

The altar, opulent as it was, was cordoned off, prohibiting one from admiring its beauty in greater detail. Beyond the altar were tombs and chapels dedicated to the deceased royalty. While there were plenty, one of the most significant to me was room housing the tombs of Queen Mary I and Queen Elizabeth I, whose chapel was too tight for these two majesties, especially with the heavy crowds waiting to see them. I was also struck with the grandeur of King Henry VII Lady Chapel, where panels of stained glass occupied almost an entire wall. The fan-vaulted ceilings and the rows of flags added grandiosity to the already lavish ambiance.

The Poets’ Corner was also one of the marvelous portions of the Abbey. Other notable British personalities, especially in art, were interred here, including Charles Dickens and George Frederic Handel. Just before exiting, we took some moments to admire the Coronation Chair and paid respect to the grave of the Unknown Soldier, the only portion of the nave where one could not step on.

After the lengthy visit to the Abbey, we would’ve wanted to see more of the exterior of the Houses of Parliament when, in typical English fashion, the weather turned. It was suddenly pouring rain, and we could only be like the others struggling to find some shelter over our heads. It was a quick downpour, yet the gloomy clouds forced us to head to an indoor destination: the National Gallery.

Though the museum housed an enormous collection, I had only one inclination in particular: the Impressionists. Several works of Van Gogh, Monet, and Cezanne were on display and I could not help admiring each master’s brush stroke — be those swirls, small dabs or long lines. Along with the interplay of several hues, these seemingly incoherent strokes suddenly formed a sensible image. I was especially enamored by Van Gogh’s A Wheatfield, with Cypresses, by Pissarro’s The Boulevard Montmartre at Night, and by Bathers at Le Grenouillère. They were beautiful. I could stay there for a lot longer, except that my folks were already exhausted by the day’s touristic activities that we decided to head home.

Tomorrow would be another day. Happy travels!