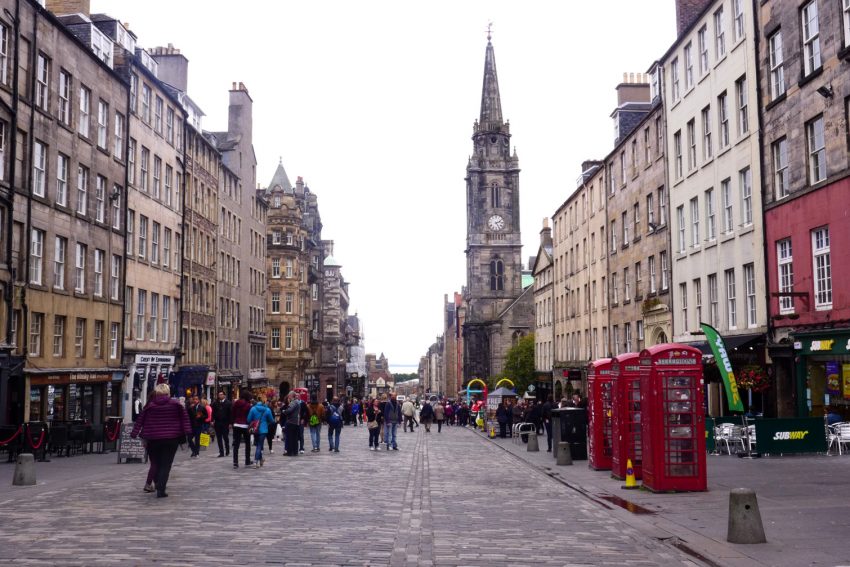 Upon exiting Edinburgh Waverley, we were greeted by rows of old stone buildings. All of us agreed that looking at that view reminded us that we were, in fact, in Europe. We proceeded to head up the path to get to the Royal Mile, the street where most of the action in Old Edinburgh was. A tune of bagpipes being played seemed to guide us to where the attraction was, and sure enough, a man in full Scottish attire was playing his instrument. There were not too many people around, but I never expected visitors to be this plenty. After grabbing a bite to eat, we hopped into a nearby cafe where we got a very lucky table overlooking the busy street below. It was fun to watch people (mostly fellow tourists) enjoy the views and move around main pedestrian-friendly thoroughfare. We sipped our cups of coffee leisurely, warming our bodies that had been shocked by the cold outside. I guess it’s one of the joys of longer travel, we had the time to stop and let things be, without the rush of being here or there by a certain hour.

Well, the exception was getting the key to our rental. We were fortunate to have been able to rent an apartment just off the main street, which happened to be very close to the train station. Over the course of our stay, we visited the Royal Mile everyday, save for the one where we visited the Highlands. The Royal Mile is home to many pubs and cafes, so there was no excuse not too eat good food. And yes, from what I tasted, I liked Scottish food, but more on that on a later post.

From a shopping perspective, there was an abundance of different souvenirs and goodies to take home. Cashmere, whiskey, and shortbread all come to mind as main things to see or taste or bring home, whatever the case may be. The shops mostly catered these items, in addition to the usual souvenir items like magnets, mugs and the like. The exception was the stalls at the Royal Mile Market whose creations were quite unique. Even if you’re not an avid shopper, staring at the the glass windows from inside this relatively dark building was a treat in itself.

It was hard to miss the various “closes” or paths that stemmed off the main street. Some of these were dead-ends. I overhead one guide stating that at one point in time, these were used to limit the spread of a plague. Building on this morbid history, several ghost tours proliferated on the scene as the dusk fell. A horror tour bus was even running around town. Some of these closes, however, connected the Royal Mile to other streets in the city at present. The paths were sometimes narrow but manageable.

More architectural gems could be found in the area, including the massive St. Giles Cathedral. We didn’t have the opportunity to enter the premises, nor climb the clock tower, but even its exterior was impressive enough. I was also particularly delighted to have my photo taken with the sculpture of Adam Smith which stood just outside the cathedral, having majored in economics in college, On the opposite side of the road stood the City Chambers, and I was intrigued by the arches dominating its facade. A war memorial was erected just by the entrance — a perfect location to remind people of the tragedies of war and the importance of peace, but admittedly not the most solemn place.

At the end of the Royal Mile was the Edinburgh Castle. A few street performers (not sure if they qualify as such) amused passersby on the sides of the street, making the walk uphill a rather easy one. Several mirrors from Camera Obscura also thrilled us on the way up — oh the magic of optical illusion. We skipped the whiskey tasting experience, as my mom and I weren’t keen alcohol drinkers, while my father suffered from gouty arthritis at the time.

We visited the historic castle in one afternoon, but more on that story in the next post. Happy travels!