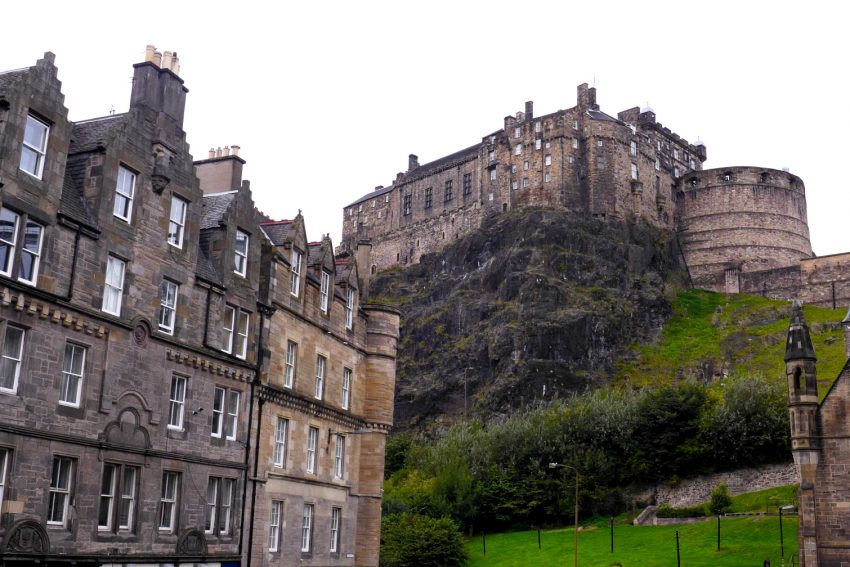 Following our day trip to the Scottish Highlands, we opted to take it easy the next day. Later that afternoon, we were well on our way back to Cambridge. Before I leave my thoughts on Edinburgh all behind, allow me to indulge you in a few more sights that Edinburgh offered. I must admit that we explored very little of the city apart from the Old Town, but we saw quite a bit on top of the double-decker bus. I know, it’s a bit touristy, but we made do with what we could given our parents’ mobility.

Hard to miss was the Scott Monument, located just across Edinburgh Waverley. Sloping downward was the Princes Street Gardens, where many people hang out enjoying the changing foliage and the still blooming flora. Hovering above was the mighty Edinburgh Castle, whose grandeur became apparent as seen being perched on top of a rocky mountain. The craggy peaks near the very modern building of the Scottish Parliament was the first of many beautiful Scottish landscapes I had seen. Farther north, the seascape was not as astonishing, but I was glad to have seen it on a clear day.

It would be the city’s architecture, however, that captured my heart. The old stone buildings created an atmosphere that made me feel that I traveled centuries back. Those clustered on The Mound — the headquarters of the Bank of Scotland, the New College at The University of Edinburgh, and the Scottish National Gallery were some of the best that I remembered. I also enjoyed the drive from the National Museum of Scotland towards McEwan Hall and the Old Medical School of the University of Edinburgh. (I almost missed seeing Greyfriars Bobby, as it was tiny from the bus, but the crowds gathering around it gave its location away.) I adored Grassmarket Square with its row houses and local businesses while the Edinburgh Castle was just lingering up above. I could only imagine how it was like centuries back, when the historic castle was still the seat of power.

Some unique arched or pointy roofs or even the rows of chimneys on the roofs were fascinating to me. The bronze sculptures tarnished by time, or the wellheads, or even the streetlamps all added to the allure that Edinburgh imprinted in me.

Perhaps it was because we didn’t rush to see too much that I enjoyed this part of our UK visit so much. Walking around town, slowing down to enjoy cups of hot drinks while watching people pass by and enjoying great food were all hallmarks of what I think a visit to Europe entailed — and all those I got to do in Edinburgh. Never in my wildest dreams did I imagine I’d reach this part of the world, but I am very grateful that I did. I could only look forward to the next visit, or to see more of Europe in the future.

Our return to Cambridge was not uneventful. Our train got delayed massively by a man on the train tracks. Apparently, police had to be called before our journey could resume. We were lucky to even catch the last train from Stevenage, our transfer station to Cambridge. We got home past 2 in the morning, which was a long time from our 18:30 departure from Edinburgh. Our train tickets got refunded though.

More on the UK next time. Happy travels!