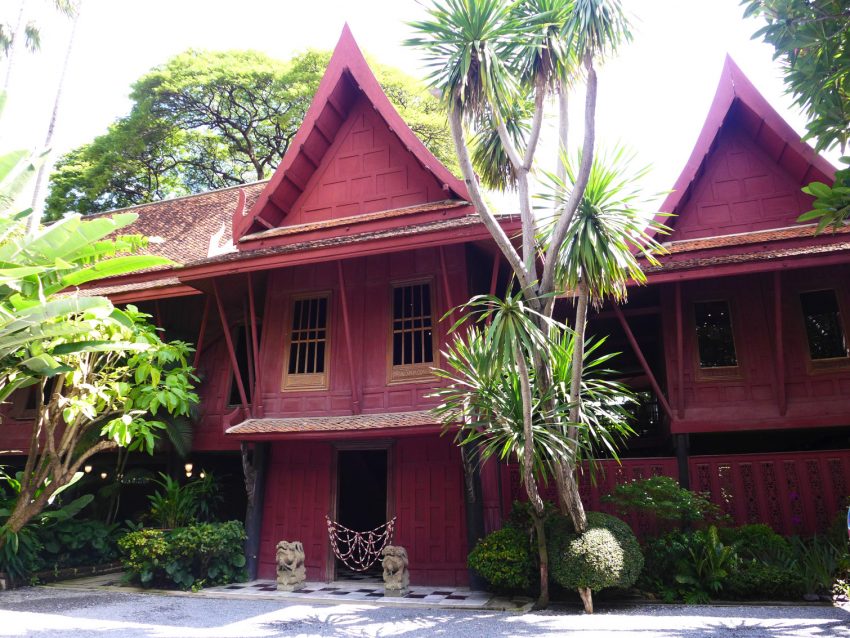 It’s been some time since our temple run tour in Bangkok, but I still couldn’t convince my parents in visiting yet another temple. Apart from food and shopping, there was very little room to wiggle in as far as touristy activities were concerned. Luckily, our hotel was located just around the corner of Jim Thompson’s House, one of the lesser-known attractions in the city. So one morning after breakfast, we walked through the side street just off of our hotel and headed to this museum. It was surprising that the neighborhood soon quieted just a short distance away from the busy thoroughfare, and even more thrilling was to find a silent refuge in this energetic city.

Trees towered over the wooden structures inside the complex. Several silk threads were on display at the entrance, a testament to the influence of Jim Thompson over Thailand’s silk industry. The red wooden house soon welcomed us, nestled among the various tropical plants. It was the first Thai-style house I would get to see, apart from the royal residences that we previously visited.

We thought we were early, but the next scheduled tour in of the house was already at ten. Unfortunately, only guided tours were permitted so we had to wait for some time. When the hour came, we were first brought around the garden before we were let into the house. Shoes had to be removed, and photos were forbidden to be taken inside the house. The first level was basically empty, but pockets of greenery imparted freshness to the otherwise stale environment. Several pieces of sculpture were on display, most of Asian origin. The reception hall was sizeable and airy, and it featured some traditional pieces of furniture. Curiously, the armed sofa was so similar to the set we have at home, pieces which my grandparents originally owned fifty or so years ago. The other pieces were distinctly Thai or Southeast Asian, mostly made of wood and intricately carved.

We proceeded to see the other rooms in the house. In contrast to the large first room, the dining room and bedroom were a lot more modest. The big windows provided views of the garden, basically integrating the outdoors to the indoors. The wooden paneled walls remained throughout the entire house, as were the wooden floors. At one point, the guide told us to avoid stepping on the raised threshold between rooms; the Thais believed that not doing so would result in bad luck.

The tour was short, but we were able to explore more of the garden after the tour. Just behind the house was a canal that connected to some other waterways in Bangkok, and eventually leading to the Chao Phraya River. In one corner sat a humble altar, decorated with fresh flowers and donned in the same shade of paint as the rest of the house.

All in all, I liked how this house-turned-museum exposed me more to Southeast Asian architecture. I would say that its interior was more low-key compared to the Penang Peranakan Mansion and the Baba-Nyonya Museum in Malaysia, but it was a lot more grand compared to the ancient house in Hanoi’s Old Quarter. On the outside, apart from its red colored walls, it instantly reminded of Melaka’s Sultanate Palace, with its pointy gables and the stilts on which the house sat on. For someone like me who likes exploring old houses, it was a worthwhile visit.

On our way back, we were informed that a free shuttle service ran from the street corner to this museum, which we gladly took advantage of to go back to our hotel.