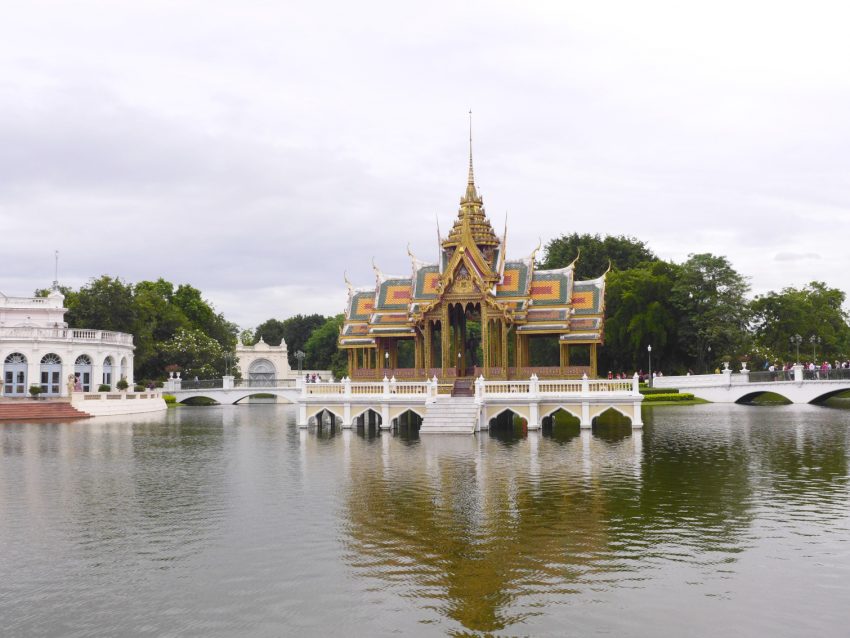 I remember Bang Pa-In Palace fondly from the trip I had with my friends back in 2013. Though it was not the most extravagant Thai royal residence I had visited, it had a charm of its own. Western architecture was evident in many of the buildings, but an ode to eastern influences still resonated in some. Fountains spewed water in the artificial ponds in the vicinity, as we strolled along the wide walkways and admired the beauty abound. The debilitating heat was our only concern as we explored each building, even climbing atop the pagoda-like observatory. Of them all, I was fascinated the most by the throne room at the residential hall.

These were exactly my thoughts as I impulsively suggested a day trip to the former Thai capital Ayutthaya along with a side stint to the Bang Pa-in Palace to my family. They had never been to these places before, and I was ready to return because of the beautiful memories.

The weather was gloomy by the time our rented car pulled into the parking lot. The entrance was teeming with visitors, and shortly thereafter, a row of rental golf carts were parked. It was a change I didn’t expect, as the sight (or the mere existence) of these vehicles ruined the atmosphere of the royal palace grounds. The Khmer pagoda by the pond near the entrance was under construction, and the royal residential hall was cordoned off from the public.

By the time we arrived near the Thai Pavilion, the structure standing on top of the lake, there were a lot of people. No, it wasn’t as crowded as the Grand Palace in Bangkok, but it was more than what I expected. Most of them stood in clusters, and the worse part was that they spoke in volumes I had never thought possible in these grounds: they were loud, irritatingly so.

As we moved farther from the crowd, a little piece of heaven emerged as we took our photo in a small walkway before the bridge. I couldn’t remember this part during my previous visit, but it was a very nice viewpoint to capture the palace grounds’ different buildings. We carried on towards the other portions of the royal grounds, but we did not enter many of the buildings. We did enjoy the topiary of elephants, but then it began drizzling so we had to find our way back, even before reaching the temple at the back.

Because I badly wanted to re-visit the throne hall, I dropped by to check if entry was already allowed (in the presumption that they opened at certain hours only), but the cordons remained in place. It was disappointing to learn that the highlight I was after would not be realized after all. Oh well, I had to content myself that a visit once in this lifetime was enough. I was grateful for the opportunity to return to this palace though, no matter how less impressive the experience was than my earlier visit.

Ayutthaya will be up next time. Happy (virtual) travels!