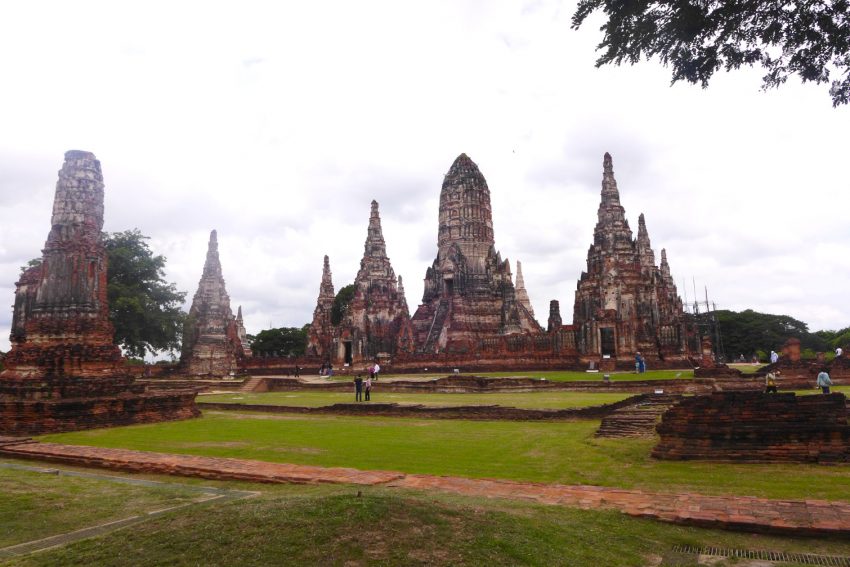 Our visit to Bang Pa-in was short, but it was already almost lunch time by the time we arrived in Ayutthaya. Lunch first, and there was only one thing in my mind: boat noodles. This was the dish Ayutthaya was famous for, and it was time to try it. Lung Lek was my choice, despite the qualms I might face from my family with its less-than-stellar interior.

There were only a few locals when we got there. It seemed that we were the only foreigners in the area (even if we didn’t look like one), but they kindly asked as whether we prefer bowls of pork or beef. We got two for each kind, plus a few more for our driver. As I generally preferred beef over pork, I started tasting the beef bowl first. I found it quite good, with hints of soy and the meatiness coming through. However, it took me by surprise to find out that the pork broth was so much better, with its unadulterated clear soup. It was a cheap meal, but it was great nonetheless.

Wat Mahathat was the first of the temples that we visited. The Buddha head engulfed by the tree roots was the prime attraction of this complex, but it was now cordoned off. Instead, an area was put in place a few meters in front, where visitors could take a seat if they wanted to get a photo with the Buddha head. It was an unfortunate development, but it was an understandable measure as the lack of reverence was simply disheartening. No matter how many signs were posted earlier to never hover above the Buddha, a few visitors chose to ignore this resulting in this kind of stricter rule to be implemented.

Our visit was short but I couldn’t help but admire the structures that remained standing. The stone Buddhas shaded by the huge trees and the towering Khmer-style pagodas were an artistic and architectural marvel to me.

Our next stop was Wat Si Sanphet, or the grounds housing a series of stupas. It was under restoration when I first visited, but the restoration works had already finished upon my return. Unfortunately, my parents were not too keen on seeing another temple (or ruins for that matter), so we no longer explored the grounds.

One of the discoveries I found on this trip was Wat Chaiwatthanaram, which was flooded the first time I went to Ayutthaya. Because my folks weren’t too interested in going around the complex, we did not do so anymore, but it is something that I look forward to visiting should I be fortunate enough to go back. The view, even just from the outside, was magnificent, and it spoke great volumes as to how rich the culture and history that this former capital had. At the parking area, some women rented Thai costumes and had their photos taken here. I wasn’t sure if they were local or not (they looked Southeast Asian), but it seemed to be a testament as to how iconic this temple-turned-attraction was to Thailand.

Finally, our driver brought us to Wat Yai Chai Mongkhon. I had mixed memories of this temple, as the numerous Buddha images and the giant sitting Buddha statue kicked my anxieties into overdrive (I admittedly am terrified of human-like figures). However, I also fondly recall the scene where we saw locals place gold leaves onto the Buddha images, as it was a festive day when I first visited. My phobia took over, so I simply told my brother to go into the stupa by himself. My parents were not too interested in yet another temple, so they passed and rested under the shade of trees. I took the opportunity to explore the grounds, and encountered another giant Buddha, but this time it was a reclining one. I didn’t know how I missed this one the first time around, but I was happy to find something new, no matter how scary it was to me.

We returned to Bangkok with the sun still up. It was a indeed short visit, but I still enjoyed it. Happy (virtual) travels!