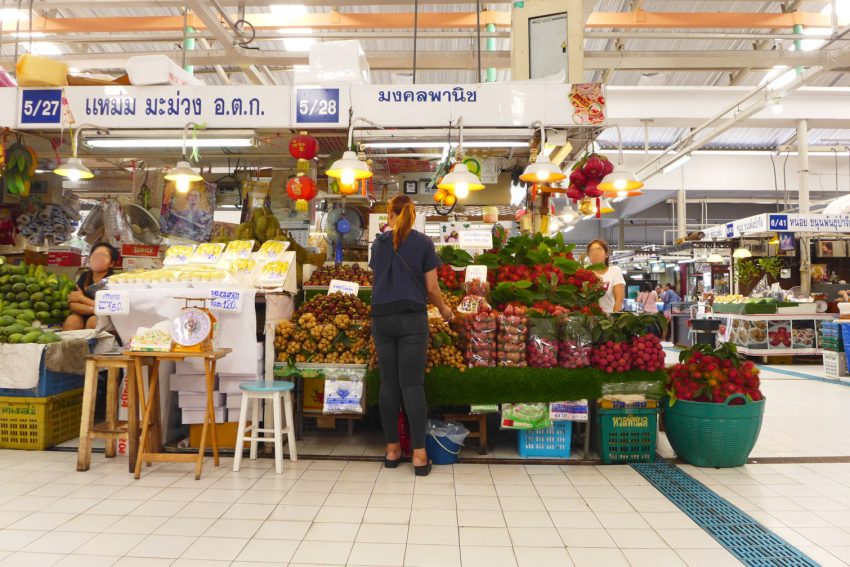 Our early departure from Manila meant that we got in Bangkok by mid-morning. We even took the train instead of the usual taxi from the airport, as we wanted to try something new (and maybe compare the progress our fellow ASEAN country was enjoying) and our hotel was just steps away from a BTS station. It was still too early for check-in, so we opted to head to Or Tor Kor Market after dropping our bags off.

It was not exactly the image one conjures up when talking about Bangkok’s attractions, but it had its own merit: it is the home of Thailand’s best-quality fruits. It was June when we traveled, a great time for the country’s fruit season which typically runs from April to July. Not surprisingly, the fruit section was at the market’s heart, with a very wide passageway and benches at the center. The floor was tiled, the roof was relatively high and the area was brightly-lit, allowing one to feel more comfortable than the usual Asian markets.

Strolling through the main corridor, it was easy to see the quality of the products they boasted. The fruits seemed blemish-free, and the sizes were huge compared to the usual tropical fruits I grew up with. Yet, the truth was that quality came with a price: the fruits here were a little more than the familiar costs back home.

Before we got overwhelmed with all the produce and their prices, we headed to another of Or Tor Kor’s attraction: the food court. After filling our then-hungry stomachs (more on this next time), we ended up visiting the back portion of the market, where dry goods were sold. A small section farther back was a surprise: more fruits were sold here, but at more reasonable prices. The vendors appeared to be more friendly too, as we browsed through the goods offered for sale. Mangosteen and rambutan were in great abundance, and the mangosteen sold here was substantially cheaper than those in Manila. I wasn’t a fan of the fruit, but my family said it was sweet (I still thought it wasn’t) and my brother thoroughly enjoyed it over the next few days. The rambutan, I later found, was the sweetest I had ever tried. The flesh was thick, and the fruit was so ripe that juices run down my arm every time I broke one open. Langsat (or lanzones in Filipino), were my father’s favorite, as they were also sweet and very fleshy. We even found salak, the snake fruit we first encountered in Yogyakarta, sold in one of the stalls. Of course, we couldn’t skip durian and tried two varieties, Kan Yao and Mon Thong. Admittedly, these weren’t our favorites, but I preferred the Mon Thong variety due its less aggressive flavor.

Back to the main concourse, things were a tad stiffer. It was a bit more difficult to haggle and the store attendants looked more stern. We were still able to buy a few more fruits. Star apples were high on the list, as they were humongous compared to what we were familiar with. Eating this proved to be one of my best experiences with the star apple, as it was so fleshy compared to the ones I had previously tried at home. Even longan and lychees were much appreciated, even if the lychees were a little past their prime. I must admit I still preferred our local mangoes as they were sweeter, but the Thai ones were much firmer.

We returned to the hotel armed with bags of our fruit haul. (The durian had to be eaten at the market though, as it was forbidden to bring durian to the hotel.) All in all, it was a great experience. My parents enjoyed it so much that we even went back two days later. I could only wish something like this exists in Manila.

Our Or Tor Kor food trip will be up next time. Until then, happy travels!