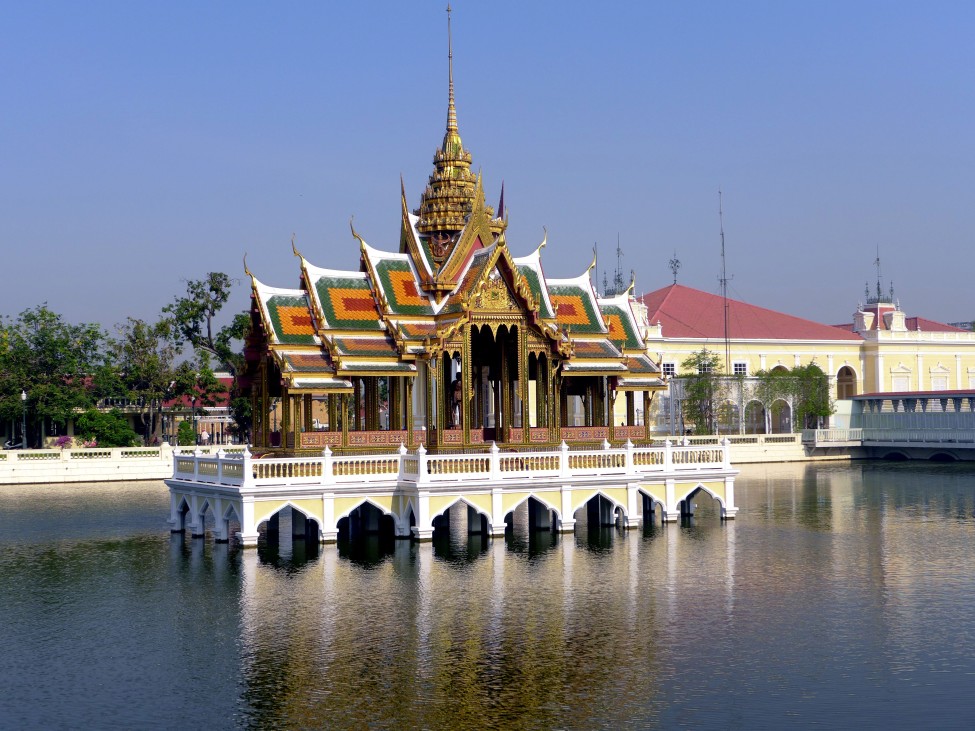 Entering Bang Pa-In Palace was like being transported to somewhere far from Asia. I saw the colonial architecture that resembles buildings of the great European cities (just from TV, I’ve never been to Europe). The gardens were manicured, and sprinkled with few outdoor sculptures and topiaries. I would never have imagined that such a place would exist in the Land of the Free.

The path around the complex was pretty straightforward – either you go clockwise or counterclockwise. We soon saw the manmade waterway that the King tasked to be built, and rested on a gazebo overlooking the Thai structure at the center of the pond.

After which, we entered a colonial building which now serves as a carriage museum. Nothing spectacular, yet going outside this building granted us a different view of the pond. Soon, a number of people made their way to our otherwise great nook.

Next, we proceeded to this Chinese-inspired Hall of Harmony and Peace, after playing on the lawn on which the elephant topiaries stood. It reminded me of the great temples in Beijing, albeit this paled in comparison to those.

Soon, we were on our way to the top of the observatory, a red and yellow building where the King could view the majestic city where he lived. The topmost portion was restricted to visitors, so we settled on the highest place we were able to reach. Wind blew on our faces and we found ourselves calmed in spite of the humid day.

To be honest, this palace was not as great as that of the Grand Palace in Bangkok, yet this place had a certain charm that will make you linger more than necessary. I am not sure whether it was due to the colonial architecture present, or for the minimal number of visitors around. After all, you’d seldom find foreigners venturing into a DIY version of an otherwise expensive group tour.

Our last stop was the hall where the King met with his visitors. First, we had to wear these long skirts (yes, you have to wear one even though your legs aren’t exposed). Inside, most of the furnishings were European. It reminded me of the Vimanmek Mansion in Bangkok, yet there was no rustic feel to this place. This. Was. Grand.

The only thing that would make you realize that you are not in Europe was the throne, made of gold and with spires that resembled those of the throne in the Grand Palace of Bangkok.

By the end of our visit, it was almost lunch time. The sun was horribly striking against our skin. Off we went to Ayutthaya!

More on this on my next post. Happy travels!