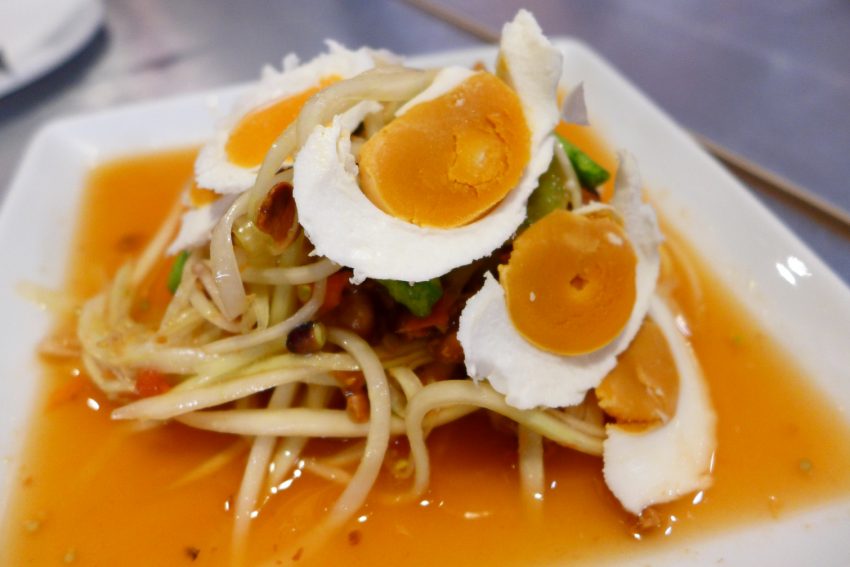 When I started researching for food to try in Bangkok, som tum was one of the most common dishes to try. This green papaya salad began my familiarity with one restaurant name: Som Tam Nua. Apart from the salad, everybody said to try their chicken wings. In my mind, why would I even consider eating fried chicken wings in Thailand, when there were many other ‘uniquely Thai’ options?

In hindsight, I was a fool. We almost missed on this opportunity had it not been for convenience. As I said in my previous posts, our hotel was a short walk or one BTS station away from the major malls in Siam, and being the lazy tourists we were, we didn’t want to venture far for dinner. We came from Siam Paragon that night, and not knowing where else to eat, I suggested Som Tam Nua in Siam Center as it was on our way back to our hotel.

The dinner rush was already over by the time we arrived, allowing us to be seated right away. We ordered some som tum with duck egg, nam tok, laarb, and the famous chicken wings. At this time of night, we were already famished, and we quickly devoured the wings soon as they laid the platter on the table. It was superb. Crisp on the outside and very flavorful on the inside, I was beyond joy. Southeast Asian flavors dominated the chicken wings, and I could hardly believe I’d ever fall in love with these Thai-style fried chicken. It was, and to this day it remains to be, my favorite fried chicken. Another platter was ordered, proving how it was a hit to our family.

From the many modifications of the som tum, we ordered one with the salted egg as a twist. Refreshing and crunchy, the som tum was a great accompaniment to the fried chicken. The salted egg stood up to the strong flavors of the salad, and its tenderness was a contrasting texture to the crunchy papaya.

Our downfalls were the nam tok and the laarb. The two resembled each other, meat in dressing, but the nam tok had sliced pork instead of the ground pork in the laarb. Don’t get me wrong, they were both flavorful — with the typical sweet, sour, salty tastes that embody Thai dishes — yet they were extremely spicy, a characteristic of Isaan food which this restaurant specialized in. I could hardly eat a spoonful without burning my mouth. Even the sumptuous rice that they served in the bamboo basket couldn’t dissipate the heat inside my mouth. They would have been another two great dishes, if only I had more tolerance for spiciness.

The chicken wings were such winners that we went back the following night to have some more to go. I enjoyed this meal so much and I can’t wait to go back.