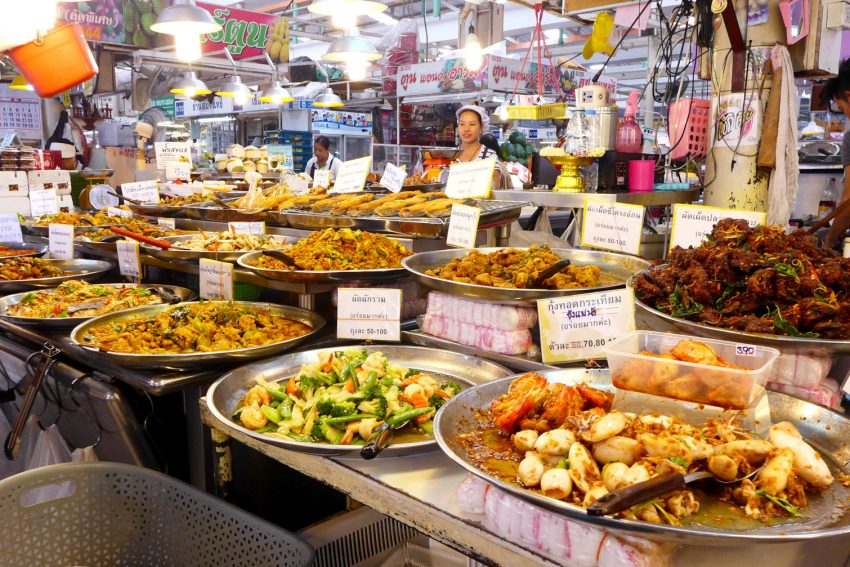 Apart from tasting Thailand’s best quality fruits, I had an ulterior motive in visiting Or Tor Kor Market. The cooked food from their food court was also well-spoken of.

The early flight from Manila left us famished. It was still too early for lunch, but the food court already had its patrons. It surely wasn’t as comfortable as those in the malls, but it definitely exceeded my expectations, especially considering that this one is located inside a market.

High up on my list of food to try was pad thai, which was some of the best in Bangkok according to one blog I read. The stall had the biggest griddle I had seen, perhaps a testament to how many customers this shop catered to. (I learned the next day that a lot of people had their orders to go, as I saw about ten orders of pad thai cooked as once and packed into containers.) Even watching the lady whip up the dish and wrap the noodles in egg was already a delight. I was even more excited to have pad thai as my first meal in Bangkok after a long time, and it sure didn’t disappoint. I was less impressed with the oyster omelette, but I attribute that to my aversion from oysters in general.

It was som tum that was next on my must-try foods, and the stall was crowded with people waiting for their orders. I took it as a good sign, but the many variants rendered the seemingly easy task of ordering quite a feat. The stall keepers were generally friendly though, and one lady quickly pounded the unripe papaya, added the sauce and sent me off with a plate of som tum after I placed my order. The balance of flavors was superb, and the crunch of the green papaya was so good, especially in tandem with the pad thai.

Another popular dish of this stall was its grilled chicken, or gai yang in Thai. We had the opportunity to sample some of it on our next visit, but I was underwhelmed. I’m unsure whether the chicken was hyped up on the blog posts I had read, or that maybe it was just not my cup of tea.

It would be hard to miss something to drink, and a corner stall of the dining hall provided our drinks. Multiple kinds of juice drinks were available, as well as coffee and tea, but my favorite remained to be Thai iced tea, or cha yen. The juices were quite good too, a bit sweet to my liking though.

Some grilled pork skewers, or moo ping, were up next. It took me a while to finally settle on a stall to try as there were plenty of options. I finally decided to follow a local’s choice and ordered some skewers to try. They were delicious! They’re a bit sweet and salty, and the meat was very tender. In hindsight, I rarely get disappointed with meat skewers anyway, so this was a great choice for me.

Though feeling a bit full by now, we couldn’t discount the array of curries and native Thai dishes of the stall just across our table. We sampled some of their curry (I believed it to be Massaman), and it was alright. It certainly wasn’t the flavor bomb I was expecting, but it wasn’t too bad. I would’ve wanted to try some more dishes, but I was almost beyond full (and they seemed to serve every dish with rice).

With more people coming in as twelve o’clock approached, we took our leave and went on to find some fruits for desserts. Or Tor Kor Market certainly wasn’t one of the top attractions in Bangkok, but we enjoyed our time there. For food lovers, if you have some spare time in the city, give it a try.