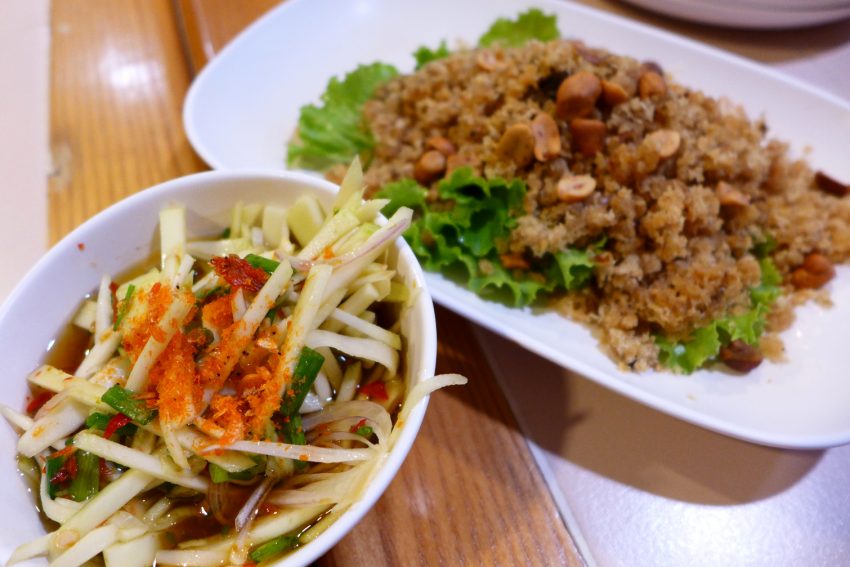 More typical Thai dishes were up on our to-do Bangkok list. Lucky us, some of these were quite close to our hotel, so we didn’t have to travel far to sample some of the city’s best.

It was already pouring when we arrived at Inter, a modest restaurant in Siam Square. As it was dinner time, the place was packed, but we were fortunate enough to be seated quickly. The selection was vast, making it difficult to choose which dishes to try. We ordered a serving of yam pla duk foo (which came with a small portion of som tam), a plate of pad thai, and a bowl of red duck curry. This was where Thai food really shined: most of these dishes featured a balance of sweet, sour, salty and spicy. The crunch that the peanuts or the mung bean sprouts or the doubly-fried fish brought added another dimension to the well-rounded flavors, making every bite more exciting. Overall, it was a great meal (and I secretly wish I could try many more of their dishes in the future).

When I started researching where to eat in Bangkok, I was keen on visiting food shops that specialize in just one kind of food. Deeming it inefficient, I decided against it and went instead to restaurants servicing a bigger array of dishes. The only two exceptions I was willing to make were Thip Samai for their pad thai and Pe Aor for their tom yum. We were unable to get to Thip Samai, but we made the short commute to Pe Aor.

Undeterred by Bangkok’s notorious traffic jam, I was determined to sample some of the city’s best tom yum. After all, I’d read many great reviews and even saw it on one of Luke Nguyen’s shows. The no-frills shop was nestled in a very modest neighborhood yet the rave reviews kept customers coming. We ordered three variations of creamy tom yum (prawns, pork and a mix), the dish the restaurant was famous for. We skipped the lobster variant as it was too expensive. The three bowls had almost the same flavor profile: sour, spicy and creamy, but the seafood lent a distinct flavor that upped its game. It was a very good bowl of noodle soup, but as it was my first creamy tom yum, I couldn’t say if it indeed was the best in Bangkok as the shop claimed it to be.

As the sun began to set outside, a few food stalls were setting up shop for the night. Pedestrians were plenty, and business seemed booming. As we left and walked towards the main thoroughfare, the aroma of barbecued meat wafted into the air, and it seemed a very good idea to spend a night walking around here just sampling all the street food available. Well, maybe someday.

Would I go back? To be honest, probably not. I would rather sample other versions of tom yum from other restaurants, mainly to broaden my knowledge in creamy tom yum. But if I were in the area, I guess another bowl wouldn’t hurt.

More food will be up next time. Happy (virtual) travels!