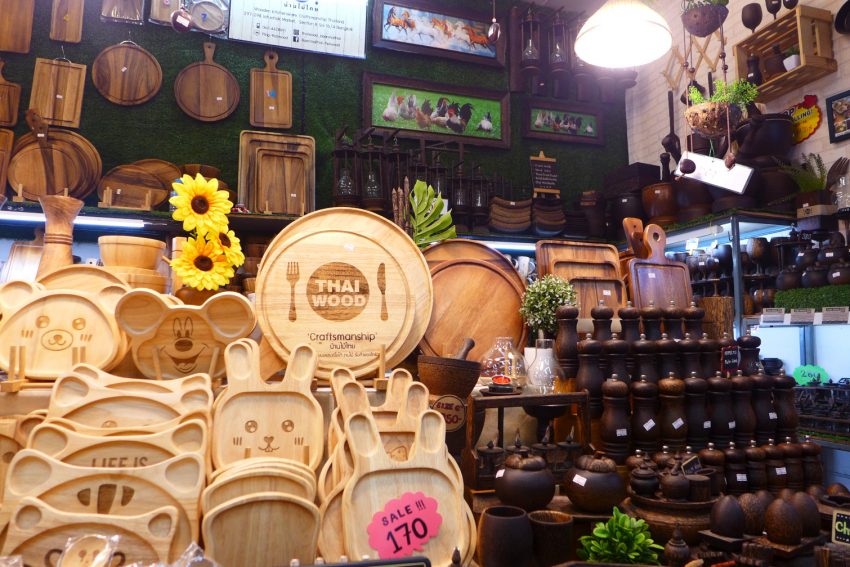 The weekend had befallen in Bangkok, a lucky day I must say. It was time for the city’s biggest weekend market, the one situated in Chatuchak. It would be my parents’ first time to go; mine, second. It had been years since my first visit and I was excited to go back. I felt uncertain how my parents would feel towards it though.

We took the BTS to Mo Chit and followed the bee-line towards the market. We headed there early, and some shops were still just opening up. It was calm in the morning, truly a perfect time to explore. We walked around the enclosed portions of the market, perusing items that suited our fancy. There was definitely no shortage of goods here, but some of those that interested us were the wooden kitchen crafts from one store. The assortment of wooden spoons were just so wide, and it was difficult to choose which shape to pick.

Fragrance shops, selling anywhere from aromatherapy to reed diffusers, were everywhere, but we didn’t know that early on. We purchased a few bottles from the first store we saw. We were waiting for change when a loud sound of glasses crashing emanated from within the store. As we stepped out, we realized that bottles had spilled as one shelf gave way. Uh-oh. Stores selling souvenir items were everywhere, and the ubiquitous elephant-themed products occupied most of the display space. Craft items were also abundant and very enticing even to non-hobbyists like me.

After going around the home goods section, we soon reached the clothing and accessories portion. It’s as if my mind suddenly wanted to make up for the non-shopping at Pratunam the previous day, that everything seemed exciting. I ended up getting a cloth tote to use as a foldable bag for my travels, but it quickly became one of my favorite casual bags to use regularly. Around noon, it was getting very warm and a cup of cha yen was our answer to cool ourselves down. We rested a little by the clock tower, where several people had the same idea. After the quick pause, we proceeded to roam around the center of the market. Most goods sold around here were clothing. Soon, we were searching through piles of solidly-colored cotton tees, which were definitely a bargain. Another store offered t-shirts of better quality, but with a higher (but still very reasonable) price tag. It’s good that we had limited baggage allowance for our flight the next day to keep our shopping in check. By the time we were leaving, the open area was filled with vendors setting up stalls…then it made me wonder whether it would have been better to shop here in the afternoon? Maybe that’s something to do next time.

It was rows of food carts on our way out of the market–from fried delicacies to cut-up fruits to refreshing shakes. It was easy to be lured to get a quick meal. However, we opted to head to Terminal 21, as we wanted seats to have our meal. Our legs were quite exhausted at this point. Given the amount of time we spent at Chatuchak, I was sure that my folks had a great time.

I had heard good things about the food court in Terminal 21, but what surprised me though was that even during a very late lunch, a table didn’t come easily. Most were filled with patrons, and it took us some time to finally land on one. Like the food court in MBK, a prepaid card system is used for payment. I wasn’t exactly enjoying the hassles I was encountering, but it was shortly dissipated by the braised pork trotters (khao ka moo) that we had. The tender meat was drenched in a sweet soy-based sauce, akin to a Filipino dish we call pata tim. In hindsight, it was no wonder that people were queueing at this food stall. The curry I had from another shop was forgettable, but generally the meals in the food court were so cheap that it wouldn’t hurt too much in the pocket to sample as many dishes and drinks as possible.

We did not explore around the mall much, but we made a stop at the restroom on the London floor. The hallway leading to the toilets was painted with a faux London underground train. How I wish I wasn’t too tired so I could see more themed floors. Interestingly, the view of Sukhumvit from the restroom was quite good too–a view I missed from the food court. We descended to the ground level through a very long escalator, which spanned four levels. It was a bit terrifying at first to get on the steps, but it felt fun in the end. At the ground floor, we managed to purchase some sticky rice from the weekend fair.

Before we headed back to our hotel, we converted a little bit of money at the currency exchange at Asok station, which I must say had a very brisk business (and a wonderful rate too). We were to leave Bangkok very early the next day, and though I was intending to use Grab as our transport, I wanted to make sure I had enough baht to cover the fare should we use a taxi instead.