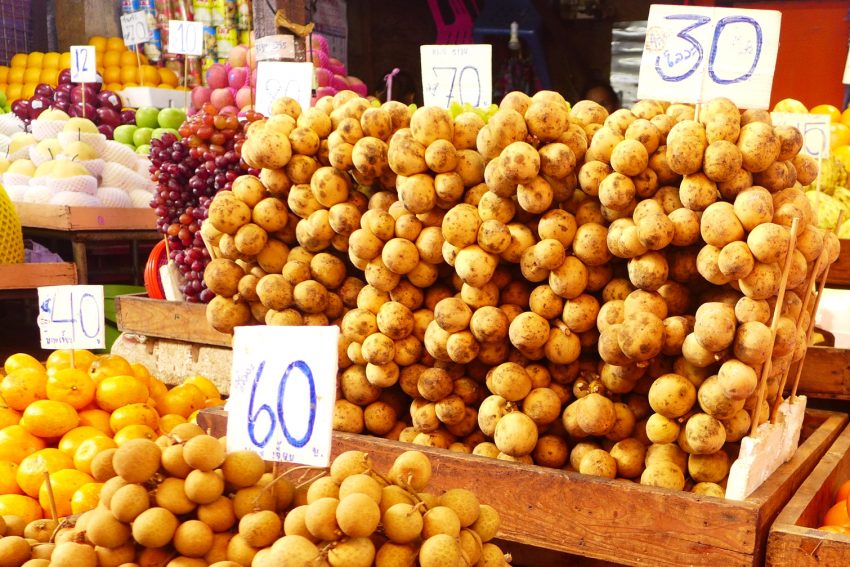 “What are we going to do today?” was the question my parents asked me over breakfast on our second day. We had no concrete plans on this trip, so between visiting another temple or exploring a market, they chose the latter. I was unsure what was in store for us, having never been to the area that we were about to go to.

The disappointment that yesterday’s excursion to Or Tor Kor brought prompted us to visit a cheaper alternative. Khlong Toei Market might be one that was far off from tourists’ radars, probably except if you signed up for a Thai cookery class. It’s not exactly a place that lured in foreign visitors for the wow factor, but it was an interesting place to venture in primarily because it’s an active market where locals and restaurateurs shop for the freshest produce.

Upon entering the market, it was a section of fruits that greeted us. Loads and loads of fresh fruits were available, yet the quality was not at par with that that one finds in Or Tor Kor. The prices were a lot cheaper, though. Most tropical fruits were sold here, from Thailand’s precious mangoes to their famous tamarind pods. Long kong, longan and dragon fruit were also on offer. Even apples, oranges, pears and grapes could be had.

At the end of fruit section was a grittier portion of the market. The wet portion, where meat and seafood were sold, stood here, which we did not explore. By the road side, there were wholesale bags of leafy vegetables, and even fresh coconut being grated from the shell. Knowing we couldn’t procure anything from this area, we went back to the fruit section and bought all the fruit that interested us. It was here where we bought what we thought were sugar apples, but we later found out to be a hybrid fruit atemoya, a cross between a cherimoya and a sugar apple. It was a delicious tropical produce, very creamy and sweet like that of a sugar apple, but without the burden of seeds.

If getting to Khlong Toei Market was easy, getting out of it was rather trickier. I couldn’t get a ride from Grab, so we had to take the MRT instead. Good thing that the station was quite close. A few transfers and a bit of walking later, we found ourselves in Pratunam Market.

Though Pratunam area was ridden with malls, it was in the market where some of the cheapest pieces of clothing were. I especially enjoyed the sundresses I acquired on the previous trip, and I was looking forward to getting some more. Luck wasn’t on my side on this shopping time, and we ended up leaving empty-handed. Sure, I wasn’t able to get the things I wanted, but at least I didn’t spend any money on unnecessary purchases either.

By the time we got to Ban Khun Mae, another famous Thai restaurant, we were quite famished. The restaurant was a bit dark, with wooden furnishings used all over. We sampled three dishes, tom yum, pad krapao and stir fried vegetables. The tom yum was quite good, and it was the rendition we enjoyed the best so far in Thailand (yes, even beating the famous Pee Aor–although I’d like to retry that one again in the future). The dish of stir fried vegetables was good too.

It was the pad krapao that was a little bit difficult to eat. It’s not that it tasted bad, it was just too spicy to handle. A few bites in and I had gulped most of my cha yen, in an attempt to dissipate the heat I was feeling in my mouth. We managed to remove some of the diced chili peppers in the dish, but it was an arduous task, so the heat lingered throughout the meal. It would have been a great dish, if only the spiciness was tapered down. All in all, it was a good meal, and I would love to go back in the future.

It wasn’t the most brilliant of ideas to get a Thai massage shortly after a meal. We attempted to walk around Siam Square for a little bit to have time to digest our late lunch, but most stores weren’t exactly suited to an older group of adults. We didn’t want to leave the area since the massage place was here. Let’s Relax Spa was our choice, having been there twice previously. I know I should try different massage places in the area, but I quite liked the familiarity that this one brought.

Refreshed from the massage, we spent the latter part of the afternoon roaming around the malls in Siam again, before walking back to our hotel to call it a night.

Until the next tale…happy (virtual) travels!