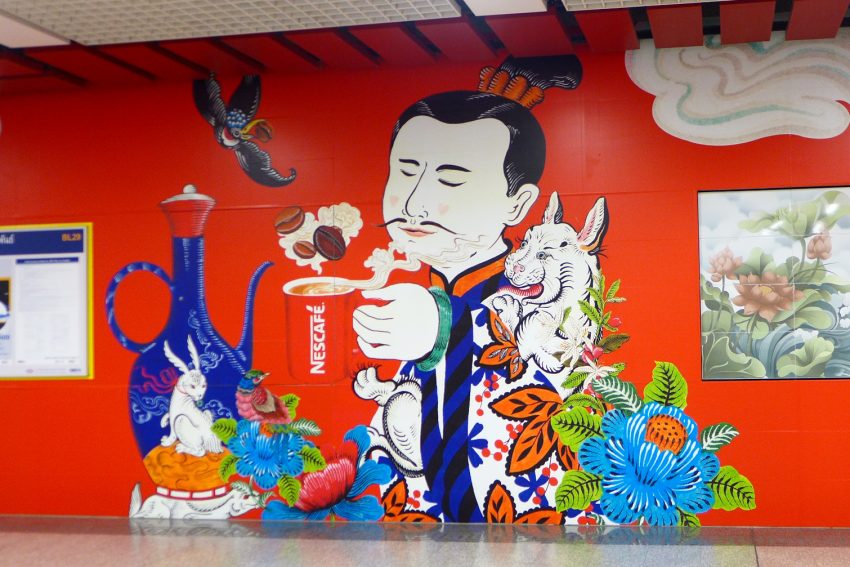 After having just landed in Bangkok, we continued our morning with a ride to Or Tor Kor Market. It was a market we enjoyed the previous year not only for the abundance of its fruits but also for the ready-to-eat food the food court offered.

“What are you going to do in Or Tor Kor?”, our Grab driver asked. “Fruits” was our reply. “Expensive”, he said. It was a fact I knew earlier on, but it wasn’t that we didn’t find them expensive, some were just a lot cheaper than the prices we see at home. It was June the first time we went, a season for fruits, so it wasn’t as pricey as I expected them to be. One year on and during an off-season month, prices were a bit inflated. The selection was not as plenty as we had witnessed before, and the space occupied at the back was no longer filled with fruit vendors but was replaced with plant sellers. It was a little disappointing, to be honest, but such was the case of seasonality. June was indeed a better time for fruits. We then proceeded to the food court to grab some early lunch instead.

In this food court, I could find some of my favorite foods in Bangkok: the pad thai, the moo ping and the som tum. Even just these plates were enough to convince me to travel all the way to this market. A queue was forming at the Chinese roast meat stall, so I went and got a plate of roast pork belly too. Everything went down with a big cup of cha yen; I was a happy kid with a belly full of Thai goodness.

From Or Tor Kor, it was an easy train ride to Yaowarat, Bangkok’s Chinatown. Just exiting the train and within Wat Mangkon station, I was enamored by the freshly-painted murals on the station’s walls. Though it was sponsored by a coffee brand, it was nonetheless fascinating to see contemporary art in this busy metropolis. Upon leaving the station, towering signages filled the vista above the road. Having just had lunch, it was impossible to fill our bellies with more food, so it was time to explore the market instead.

The old market was full of Chinese items — roast meats, teas, Chinese condiments and sauces, noodles, and various kinds of dried mushrooms. It felt as though we weren’t in Thailand anymore. A portion was dedicated to fresh produce too. Fruits were everywhere, and even fish and seafood were displayed on ice. Deeper in the market, dry goods were sold, though most that I’d seen weren’t distinctly Chinese. Back at the main road, gold jewelry shops lined the busy thoroughfare. I once heard that Bangkok’s gold was less expensive than from other cities so I was enticed to pop into one, but the price I was given was still too high for me.

With the grey skies looming, it was time to head back to the hotel. We took a short nap before going out again in the afternoon.

Later that day, we took a train to Siam, which was just a station away. Here was where three beautiful shopping malls stood, Siam Paragon, Siam Center and Siam Discovery. Siam Paragon was directly connected to the Siam train station, and so the crowds poured into this mall like no other. A lot of luxury brands could be found here, though admittedly we are not luxury shoppers. It was the supermarket that kept us going back, along with its food court, as the selection of food was just so vast.

However, it was in Siam Center where we had our dinner. This mall’s interior was my favorite among the three: edgy and eccentric with a bit of warmth. It was also where my favorite eating spot in Bangkok was: Som Tam Nua. It was another night of superb chicken wings and green papaya salad, a discovery we had a year earlier. On this night, it was our first time to try their stir fried noodles, a dish too spicy for our liking, and some grilled beef, some slices of which were overly cooked and quite tough. Nonetheless, I know that I’d keep going back to this place in the future to sample more Thai dishes.

To go back to our hotel, we passed through Siam Discovery, another superb- yet sanitized-looking mall. As with the other malls, we only window-shopped as we made our way to the public walkway. It had been a great first day in Bangkok, and it was time to call it a night.

Until the next tale, happy (virtual) travels!