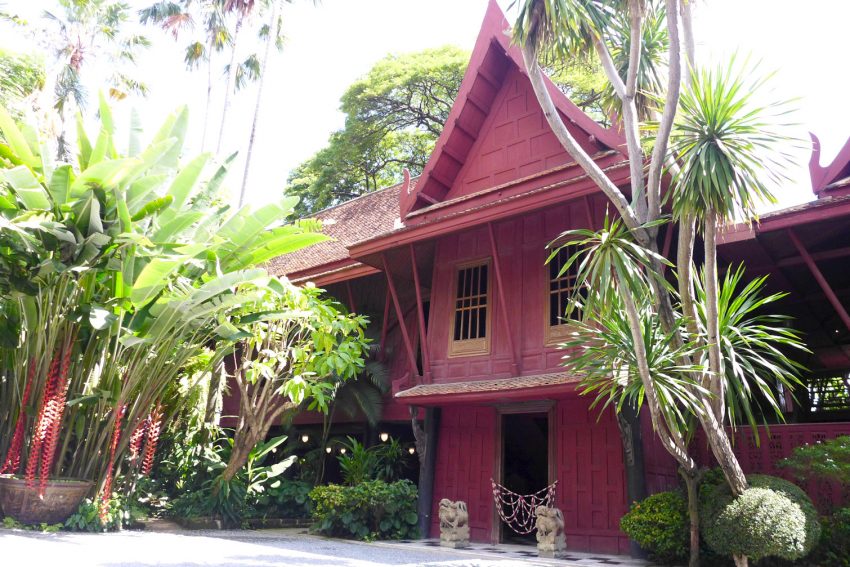 While many people fall head over heels in love with Bangkok right away, I was one of the exceptions. Sure, I was fascinated by the grandeur of its temples and palaces, but little admiration went beyond that. Perhaps it was its resemblance to a congested, busy Asian city which I grew up in that made me shy away from Thailand’s capital. But in 2013, as I traveled with friends in this bustling metropolis, I began feeling an appreciation towards this mega city. My return to the capital involved less sightseeing, indulging instead in another Thai attraction: food. Here are my most memorable experiences on this trip:

With the exception of the royal residences, it was the first Thai house I had seen. This former-expat residence proved to be one silent and lush refuge from the busy capital. I personally loved its garden and enjoyed the traditional architecture too.

I knew how cheap getting clothes from Pratunam could get, so I was a little dismayed with the Platinum Mall, as it was a lot marked up. A return visit to Pratunam Market took the disappointment away with its more reasonable prices.

In spite of my previous experience of a Thai massage, I came back fully prepared with what’s ahead. For two days in a row, I indulged in this wonderful body treatment. It’s a bit of a torture for the uninitiated, and often times the massage therapists would smile whenever a client winced in pain. Don’t worry, the discomfort during the sessions would be rewarded with a more relaxed body afterwards. I love it, and it remains to be my favorite kind of massage.

I loved the location of our hotel in Bangkok, which was a few steps away from the National Stadium BTS. From here, four malls were within walking distance: MBK Centre, Siam Center, Siam Paragon and Siam Square. Of the four, I liked MBK the least and loved Siam Center the most, particularly its edgy interior. As always, I wasn’t keen on shopping, but I enjoyed the food and restaurants level.

Though I grew up eating this fruit, I had never enjoyed it as much as I did in Bangkok. It was fruit season when we went, and so shopping for them was not only cheap, but they were also delicious. Natural fruit juices trickled down my arms as I opened these spiky fruits, the flesh was thick and their sweetness was unparalleled. There were a lot more fruits during our visit, but this one took the cake for me.

I know, it’s a Thai classic, but some were made better than others. My particular favorite was Boonsap’s version, which we hunted for all the way in Bang Rak. It was perfect — the rice was chewy with just the right bite, complemented by coconut cream, sweet mangoes and a crispy topping.

It’s crazy to think that I had tried Buffalo chicken wings in Buffalo, NY, but it paled in comparison to the flavors presented by the chicken wings from Som Tam Nua. I never thought I’d enjoy chicken wings this much that we had them over and over. Good thing that one of their branches was close to our hotel, and they’re not too expensive as well.

I’ll tell you more on my Bangkok trip over the next posts. Happy travels!