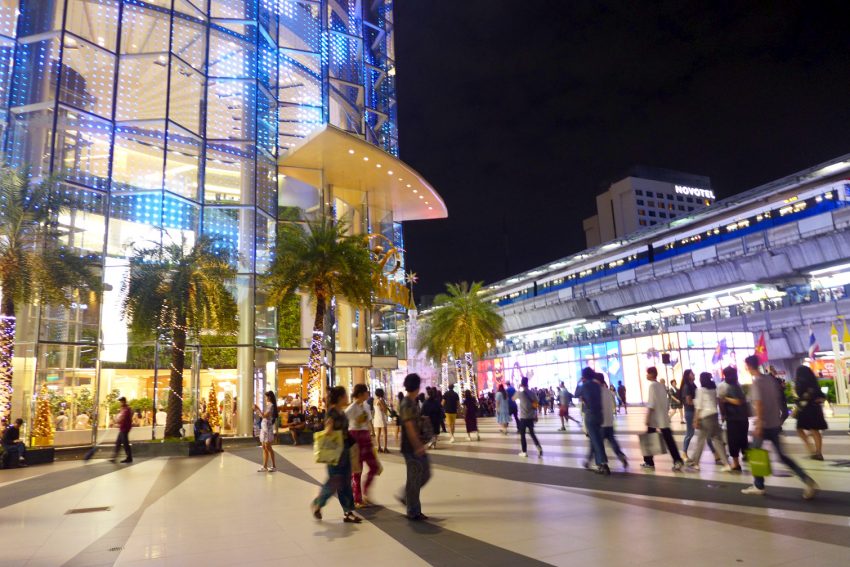 It was still dark when our flight landed in Bangkok. I still couldn’t believe that we were here, merely over a year from our last visit. Our previous trip was thoroughly enjoyed by my parents, that they were eager to go back soon as an airline seat sale became available (which coincidentally happened just a few days before leaving for Japan). It wasn’t exactly the beautiful views and the ornate temples that lured us to go back, it was simply the vibe of the city–a city I first did not like, but was a city I had come to enjoy going to over the years.

We looked for the affordable cafeteria at the airport and had an early morning snack (yes, there was one at the first floor), before waiting for the train bound for the city center. In the meantime, I bought a SIM card at the airport and exchanged some dollars to Thai baht. I initially wanted to use a manned foreign exchange counter, but as the line was long, I opted to use the currency exchange machine conveniently located by the entrance to the Airport Link. The sun was rising as we made our way to Bangkok, and the train was filled with locals going about their day–students going to school, office workers on the way to work, and housewives carrying bags and baskets headed to the market. In no time, we were at our hotel in Siam, the same one we stayed at the previous year.

It was still early in the morning by the time we arrived at our hotel. We opted for an early check-in, which wasn’t complimentary, but we needed a little bit of rest and refreshment before heading out for the day. (Alternatively, we could have simply left our bags and gone out, which we did the previous year.) We were given a room on a higher floor upon request. It was a triple room, which was much smaller than the quadruple room we had a year ago. The great thing, however, was the room location–not only were we on a high floor, but we were also given a corner room which had views over the National Stadium and Siam, and even Sukhumvit farther along. Breakfast was complimentary on the days of our stay, and they were even kind enough to pack our breakfast, as we had an early flight to catch on the day of our departure.

However, the real deal to me was the hotel’s location. A train station was situated by the front steps of the hotel, allowing easy access to most of Bangkok. The city’s best malls were within walking distance, and along with it came our favorite places to eat around Siam. What I especially enjoyed was our ability to go back to our base after lunch to get some rest before heading out later in the afternoon to have dinner and to prance around the malls. Walking back to the hotel at night felt safe, with the brightly-lit walkways and the busy life going about around the area.

Strangely, we were too excited to be in Bangkok quite early that day that we couldn’t sleep, so it was time to explore the city again. There was no real sights to visit this time around, not that Bangkok had a shortage of any. My parents were starting to get tired of visiting temples around Asia, and having been to the city previously, it was finally time to stop exhausting ourselves chasing attractions. It would be sampling the food that would be the highlight on this trip, as well as exploring the markets all around town (no matter how touristy some had become). Off to Or Tor Kor!

More on this next time…happy (virtual) travels! 🙂