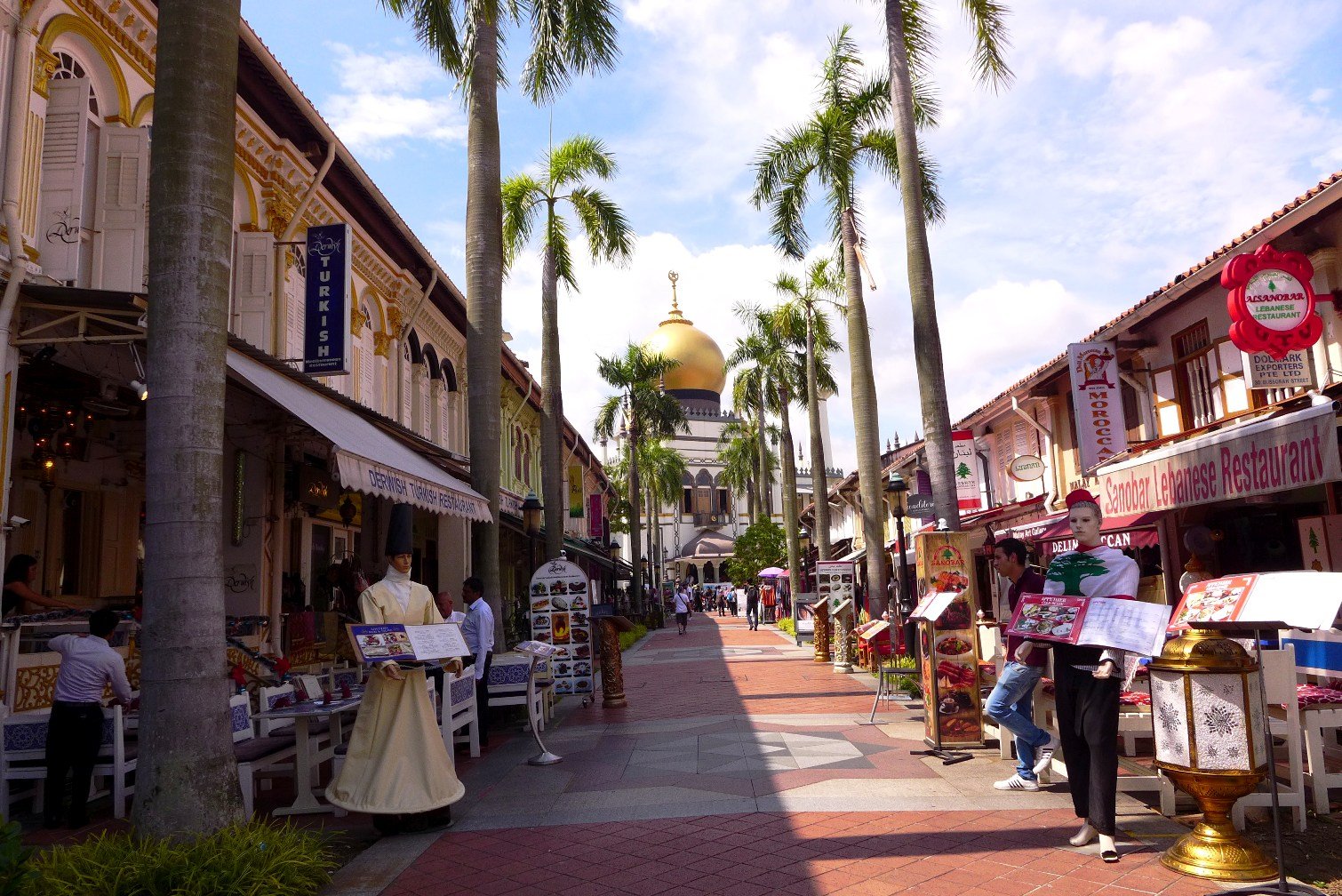 Singapore’s Kampong Glam might be tiny, but it packs a punch. This Malay neighborhood might be the smallest one I visited during the trip, yet it certainly had a charm of its own. My first stop was the country’s narrowest alley, Haji Lane, home to some of the oldest shop houses. They were typical Malay shop houses whose facade consisted of two floor-length windows on the upper floor and two tiny windows framing the door on the recessed ground floor, but without the intricacies and embellishments found in modern-day Little India and Chinatown.

Today, these shop houses no longer sell textile, lamps or perfume from the Middle East. Rather, boutique clothing shops occupy most of the stalls. Some are home to quirky or artsy shops. Most walls and facades have been painted to give a modern, funky edge, exuding a hipster vibe to this otherwise traditional neighborhood.

That is until you turn towards Arab Street, where all of a sudden, things go back to everything that screams Middle Eastern and Islamic customs. Carpets were all over, along with more embroidered textiles reeking of opulence. Beautiful colored Moroccan lamps amazed my eyes and so did the hand-painted plates. Perfume shops could still be found and so were jewelry shops.

But what draws many to this area is the Sultan Mosque. This place of worship, heavily influenced by Mughal architecture, is made extra photogenic by the its eye-catching golden dome. Palm trees lined Bussorah Street, the stretch leading to the mosque. Restaurants catering Middle Eastern cuisine occupied most of the shop houses along this road, but most were empty in the middle of the afternoon. When the heat had been to much to bear, I chose to while away my time sipping some cold tea in the humble coffee and tea shop across the street (which you couldn’t miss as it’s brimming with patrons).

Having recovered a little bit, I set out for the Malay Heritage Center through Kandahar Street. Assuming it was the yellow building on my right, I entered what was Mamanda Restaurant. This heritage spot serves traditional Malay dishes, yet what impressed me were the beautiful furniture pieces neatly arranged  by the entrance. The manager was kind enough to allow me access inside as a shortcut to the museum, even though I wasn’t a paying customer.

A quick toss in the blazing sun and I was faced with a manicured garden. For sure, I already reached what was previously the royal residence, currently housing the Malay Heritage Center. There wasn’t much on display, as were the visitors. The living spaces on the second floor instantly reminded me of traditional Spanish houses in the Philippines, with its flooring of wooden planks and its huge windows. The bottom floor was a little bit gloomy but showcased more contemporary pieces. It was a quick visit, and I was about to call it a day when something caught my eye: the Sultan Mosque was open!

Having entered mosques previously, I had little expectations of my visit. After all, in spite of its ornate carpets, mosques usually keep a simply, open floor plan for its interiors. Yes, such was the case in Sultan Mosque. However, any visitor couldn’t overlook the panels of information located just by the entrance — information regarding the origin of Islam and the practices currently observed. For the first time in all my travels, I saw an effort to make a stranger understand the faith of another, an effort to bridge the gaps brought about by the differences in religious belief. It was something I appreciated not only as a traveler, but also (and more importantly) as a human being.

I ended my visit with a plate of murtabak, a sheet of folded pastry stuffed with meat, from Zam Zam, while staring at the back of Sultan Mosque and watching people come and go.