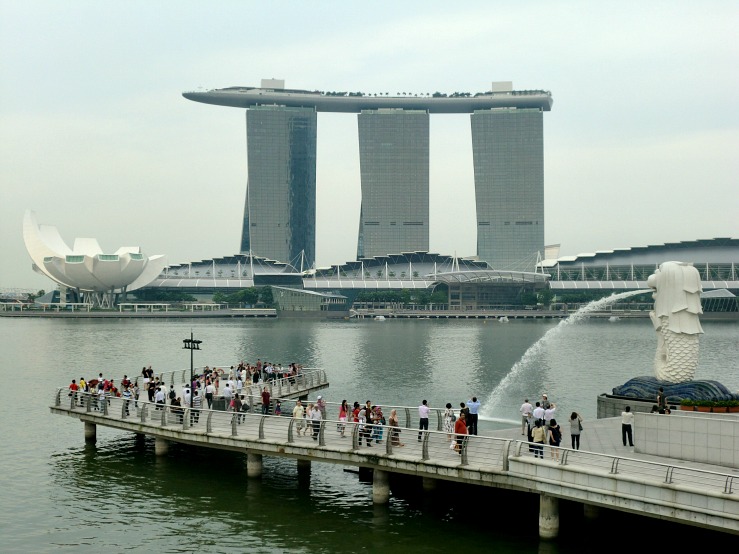 When I was younger, I hated walking. I often complained to my father when he parks the car far from the entrance of the mall. My feelings about it changed when I took it up as a class. (Yes, it’s one of the P.E. classes offered in my university!) I don’t regret it at all. I used to walk eight kilometers twice a week for my class then, something that became very useful for our travels nowadays.

Apart from the workout and the transport savings, I love walking around a city more than being driven around in a rented car. I feel that I get to know a certain place deeper as I step more on its ground. Unfortunately, not all places in Asia are pedestrian-friendly. A lot of them don’t even have sidewalks, or most sidewalks are occupied by makeshift stalls selling various things. Singapore is definitely an exception.

Like any other modernized city, Singapore also has wide sidewalks and ample pedestrian crossings. Underpasses are  abundant, and sidewalks even exist along bridges. Needless to say, I knew I could walk around in Singapore!

My plan was simple: go around the historical sites until I reach the Fullerton Hotel, cross to One Fullerton and take a bus to the Marina Bay Sands. I knew it would be a lovely walking day ahead. Here’s the route I took:

From the City Hall MRT, see the St. Andrew’s Cathedral. I wasn’t sure if it was a Catholic church, so I did not bother to enter. I later found out that it is an Anglican church, and it’s considered as one of the national monuments of Singapore.

Get out of the grounds of the church, cross the street and see the Capitol Building. Unfortunately, it’s being renovated during our visit, but the facade was still kept intact.

Walk south along the North Bridge Road, and head to the National Art Gallery. Walk farther south and you will see the Singapore Cricket Club and the Victoria Theater.

Turn right and see the Supreme Court, a very modern building standing in sharp contrast against a backdrop of colonial buildings. Across it is the Parliament House (well, the back or side of the Parliament). Just a word of caution: taking of photos is not allowed here. You will be reprimanded by security if you dared to do so.

Walk in front of the Parliament. The beautiful lawn on its front commands a feeling of exclusivity, though there’s a museum that can be accessed by the public. From here, head to the Raffles Landing Site. Take a photo with Sir Stamford Raffles, the founder of Singapore. Across the river is the Boat Quay, where a myriad of restaurants and pubs await to serve you. Near the Statue is the Asian Civilizations Museum. Along the river banks, you can see different sculptures showing the lives of early Singaporeans.

Cross the bridge and see the Fullerton Hotel. As opposed to the Supreme Court, this colonial building stands out of place from the set of high-rise modern buildings which comprise Singapore’s financial district. Go inside the hotel and feel its luxury. Then, go to the underpass leading your way to One Fullerton, where a set of restaurants and shops face the giant hotel of the Marina Bay Sands.

Take your break here — grab coffee and cherish the spectacular view in front and on your sides. Believe me, by this time, you’d feel a little bit of fatigue already!

Have your mandatory shot with the Merlion! Afterwards, cross the bridge to go the Esplanade, the durian-like structure home to great theatrical performances. (When I visited here in 2008, I was able to go up to its rooftop, I’m not sure if it’s still open nowadays.)

Afterwards, head to the Marina Bay Sands. It’s that giant structure composed of three buildings supporting a boat-like structure on top. It’s huge, there’s no way you can miss it. On the way, you can see the Singapore Flyer, the world’s largest observation wheel. You could always take a bypass and have a ride. I rode this in 2008 during its soft opening, and it was spectacular!

Back on the way to the Marina Bay Sands — yes, you’ll have to cross that bridge seemingly full of twisted wires. While it might appear scary from afar, it’s pretty once you are walking here. Shell out SGD 20 and go up the Marina Bay Sands Sky Park, the highest observation point in Singapore. Personally, I preferred the Singapore Flyer to the Sky Park.

From the Sky Park, you can shop or dine downstairs, or head to Gardens by the Bay. It was still being constructed at the time we were here, so we opted to go to Orchard Road.

So, that was all for our first day in Singapore (we started after lunch). Singapore changed a lot in four years! I was amazed. 🙂

1 thought on “Walking around Singapore”