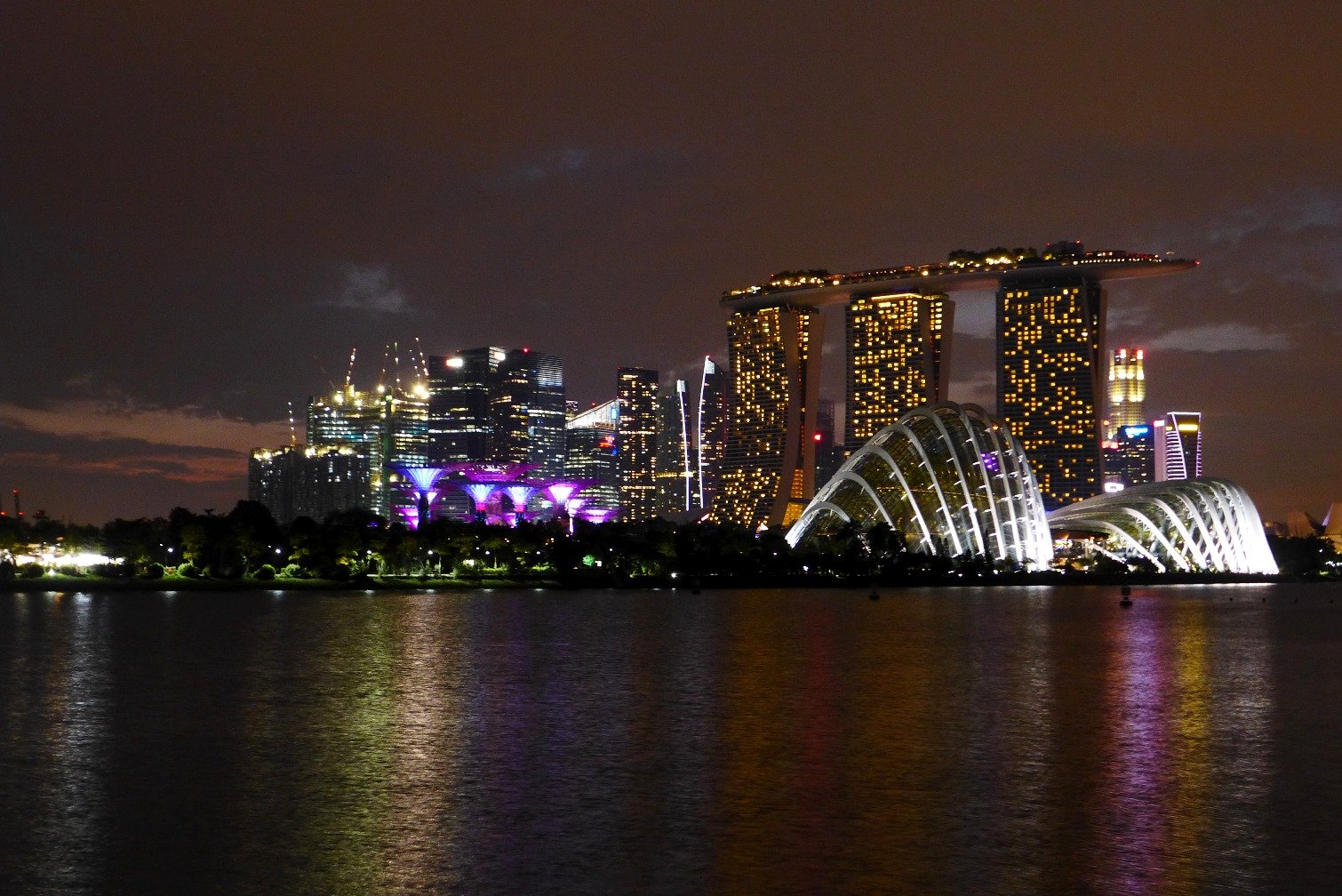 Perhaps the majority of modern Singapore lies in its downtown core: the Central Business District. This is the symbol of the country’s progress. Though not as bountiful as Manhattan’s, the skyscrapers are some of the most modern in the world. Construction is ongoing to further develop the tiny business settlement to accommodate the booming economy. Like many business centers, the skyline is best viewed at night. Many, like me, wait for the sunset at Marina Bay Sands and watch the skyscrapers shine light in the dark.

During my first visit to Singapore in 2008, there was no Marina Bay Sands. In fact, I ask myself now what we stared at when we visited Merlion Park. Today, this building has slowly become an icon of Singapore, defining a very modern landscape. I personally do not love the architecture; it’s a boat supported by three towers! It’s a feat of extreme engineering though, hence a testament to Singapore’s progress as a nation.

It blows my mind how a spherical structure housing the ArtScience Museum remains standing. It looks like a very modern giant flower below the ship (aka The Marina Bay Sands). I love it, especially looking at it from the Helix Bridge, where the Singapore skyline serves as its backdrop.

Though not especially stunning on its own, walking along the Helix Bridge at night could be captivating. The purple lights (I wonder who chose the color?) give life to the boring glow of whites and yellows of the nighttime landscape. The best part? You get some of the most amazing views of Singapore!

I do not know whether to be fascinated with the Supertrees at Gardens by the Bay, or to be scared of the possibilities it may bring. On one hand, these are some of the coolest “trees” ever — not just by the way they look, but the way they use and conserve water and energy. On the other hand, is this where the world is headed: a place where the future generations won’t enjoy much open space and real trees? The thought terrifies me.

A little tip: At night, the Supertrees have a dancing light show. I didn’t get to see it up close, but looking at it from the view deck at the Marina Bay Sands was sufficient.

This HDB Building definitely deserves a spot here. It’s the largest public housing in the country boasting 50 floors. Its size and shape contrasted with the traditional shophouses appear like a giant robot hovering over a tiny village. I find that its modernity is a little out of place even in multicultural Chinatown. At the same time, it shows how Singaporeans mix the old and the new, as evidenced in their architecture almost everywhere. The structure also features a bridge or link connecting the towers, a characteristic embodied by many modern buildings in the country.

School of the Arts and the Oasia Hotel

Given the lack of open space for greenery, these two buildings incorporated vertical gardens in their building design. In Oasia Hotel, the red building frame looks overgrown with plants. In School of the Arts, the greenery look like vines cascading down the tree trunks, made possible by the use of tiles looking like wood. A jungle or a tropical rainforest comes to mind when viewing it from afar.

La Salle College of the Arts

It’s wonky, it’s crooked, it’s cool. I love that you can see through the walls, given that they used glass panels as walls. I love the angles at which these windows were placed. I love the atrium and the bridge that connects the two main buildings. I wonder how it’s like to study here — would I feel like a fish in an aquarium? I hope not!

This is another iconic building in Singapore made to look like the tropical fruit durian. I personally love this building, not only for its structure, but for what it stands for. It is home to the country’s best artists and performances. I climbed to the roof deck once, which was great as you get really close to the spiked mounds. Even the lobby looked spectacular if you chance upon some installation art.

Gardens by the Bay East

Okay, this probably shouldn’t be here on its own, except that this is one vantage point you shouldn’t miss. The city’s skyline, along with the Marina Bay Sands, the conservatories, the Supertrees, the Singapore Flyer and the Esplanade are all in one view. (Kinda like the National Gallery roof deck, but just on the opposite side.) It’s really beautiful, trust me.

More on Singapore next time! =)