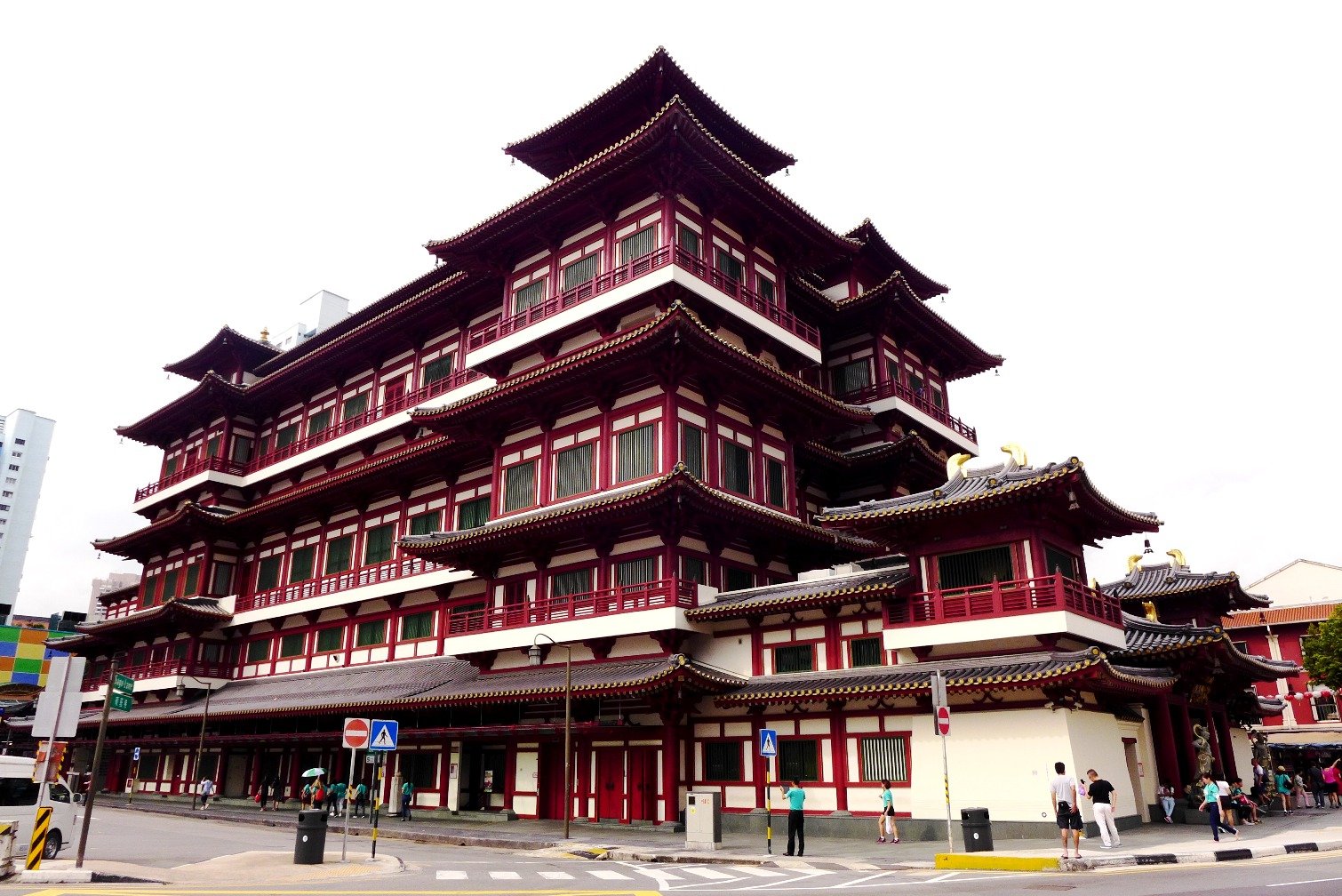 It was still quite early when I took the bus down to Chinatown. I was anxious to see the neighborhood where majority of Singaporeans trace their ethnicity from. The jewel attraction, apart from the food, is the Buddha Tooth Relic Temple.

The building is fairly new, compared to hundreds of centuries-old temples scattered around Asia. Its biggest draw, however, is that it houses what they claim to be Buddha’s tooth. Although I was a little templed out from my travels around Asia, I finally caved in and figured that there could be something special in this place. It was only time that I had to lose, should I not enjoy my visit.

There were only a handful of visitors when I arrived. I went to the office to figure out how to get to see the tooth relic, and as I went out, I heard a very solemn chant. It turned out I was just on time for the morning service — the first Buddhist ceremony I had ever witnessed. I used to think no ceremonies were in place for the public, yet I saw many locals pray with the monks.

From the ground level, I went to the third floor. No cameras nor footwear were allowed. I stood there, first surprised and then at awe for the grandiosity that was before me. It was the most lavish and ornate Buddhist altar I had ever seen.

My eyes were immediately drawn to the golden altar at the middle of the room. Fresh fruit was offered, alongside the incense and candles. I turned to my left, where plenty sitting Buddha statues could be found by the corner, as was in every corner of the room. A meditation platform was set up on each side of the room. Windows connected you to the outside, where the busyness of Chinatown could be hidden by the roofs. I could only see two people praying. Everything was quiet, except for the meditative music emanating from the ceremony downstairs.

Reaching the front, I was already by the glass window holding the main stupa, where the relic was hoisted. Was it the emerald thing? Maybe, I was at a loss. That was too small and too far. I shifted my gaze to the murals that decorated the walls, as well as the jeweled net strung at the ceiling. Even the ceiling was shouting with opulence, one fit for something bigger than humanity.

As I brought out my phone to write the memories, a guard approached me to remind me that photos weren’t allowed. I asked in return about the relic, as I was confused by what I saw. He pointed me to a monitor, where a live close-up feed was broadcasted. I initially thought it was just a photo! Then he pointed that what I thought was the tooth was actually the clamp, and that irregular ivory artifact was actually the tooth. He informed me that there was a handbook by the entrance, where one could read more about Buddhism and the temple.

I went back by the entrance, this time admiring the golden squares above the ceiling, from which beautiful golden lanterns hung. I took my time walking on the green stucco carpet and looked at the red and gold pillars around the room, savoring one of my best experiences in a Buddhist temple. I read the module about the relic, as well as how the entire room was designed. Each piece in the altar was put not only for aesthetic purposes but also for spiritual significance. Armed with my new found knowledge, I braved to go back to the main keep. I now saw the altar before the stupa, the various mini altars by the side, the dragons below the glass window, the mandala, and the drop lanterns. I then took a good hard look at the Buddha tooth relic, and saw the ivory-colored tooth as projected in the screen.

For something so tiny, so much was built. No wonder faith could move mountains. I left the floor contented, and headed to the roof garden.

Tiny Buddha statues were perched by the walls surrounding the garden. Flowers bloomed in some of the plants, making the small temple look so tropical. I entered the structure, and saw more tiny Buddha statues around the walls. The prayer wheel occupied most of the room. I would’ve left content with what I saw. But a man, who looked like an employee or volunteer, told me, “Go ahead. Turn the wheel.” I was hesitant, having been raised a Catholic. Yet, I realize that God will always be God, no matter the faith, no matter the religious structures. I turned the wheel and offered my prayers of gratitude, of penance and of petition. I turned and turned and turned, until I could no longer utter a word.

I felt light, incredibly light. That was exactly why I traveled. I needed peace in my heart, and for those few moments, I was given just that. I left the building extremely positive, ready to take on the day ahead.

P.S. The second level houses more Buddhist artifacts, yet I just breezed through it as I was alone and extremely scared of life-sized sculptures in tight spaces.