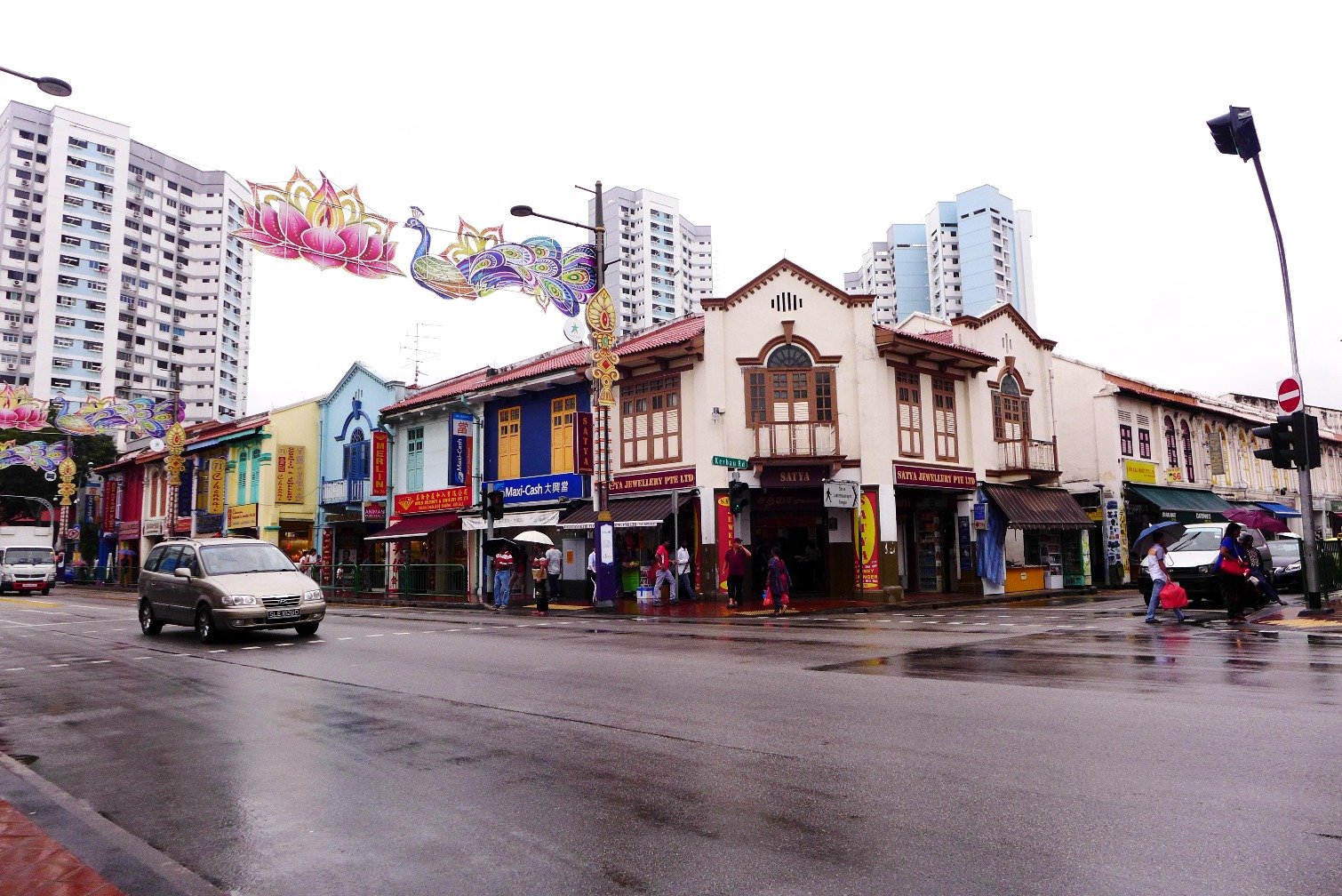 Tired of trying to keep myself dry, I braved the rain and took my time wandering around Little India.

From Little India Arcade, I crossed Serangoon Road and walked along the little shops along Buffalo Road. Bollywood music filled the damp air, while the smell of incense was everywhere. Numerous flower stalls were by the roadside, with most crafting these fresh picks into beautiful garlands ready for offering. Once in a while, I’d pop into the small stores — pottery stores, groceries and even textile shops. I loved looking at the various shapes of ghee lamps, learning about the different spices that give off such wonderful flavor and aroma to Indian food, and staring at the various sarees and kurtas. Jewelry shops were all glittering with gold. Electronic gadget shops were plenty. The shaded side walks were full of people, as everyone wanted to keep themselves dry. No complaints though: this was the Little India I wanted to experience.

The iconic thing about Little India is the bright colors of its shophouses. Orange, purple, green, pink, blue. Name it, they have it. The vibrancy of their culture is reflected in the colors of their façade, a unique facet of the Little India neighborhood. I cannot help but admire the architecture of these shophouses — some were really old, but most were restored and beautiful. Most were just simple two-storey structures, but a few had three floors. The side streets were even more magical: they contain some of the best rows of shophouses, without the thick crowd elsewhere.

I finally saw Sri Veerakaliamman Temple, one of the main temples in the neighborhood. Hesitant to enter (the grounds weren’t exactly dry and I had to go barefoot), I finally convinced myself that it would be worth it. I entered the busy temple and watched the locals prayed: handing an offering to the priest, lighting ghee lamps for prayer, or standing to pause and pray to one of the gods now almost buried with the abundance of flower garlands. Some were sitting, others were almost kissing the floor with their faces down, as though in complete surrender to God. A little later, a man roamed around while ladling out cups of beans to the community — the first Hindu feeding I’ve seen despite spending six weeks in India.

I continued popping into the side streets, still looking at various shops and restaurants. I began regretting having too much for lunch. I wish I saved a little stomach space for that keema that Azmi Chapati was famous for. (Oh yes, the crowds were plenty, signifying it really had good food, plus the aroma really enticed me.) A little to the east was a park with so many umbrellas that I wish I could take one with me. Why would you torture me like this?

Having had enough of getting soaked, I decided it was time for me to move to a drier location. I gave up with the outdoors and headed to Mustafa, a shopping center open for 24 hours. It’s great for bargain shopping and bought myself a travel adapter, some spices and coffee to bring back home. Too tired to walk back, I hailed a cab to take me back to the hotel and enjoyed the rest of the afternoon there.