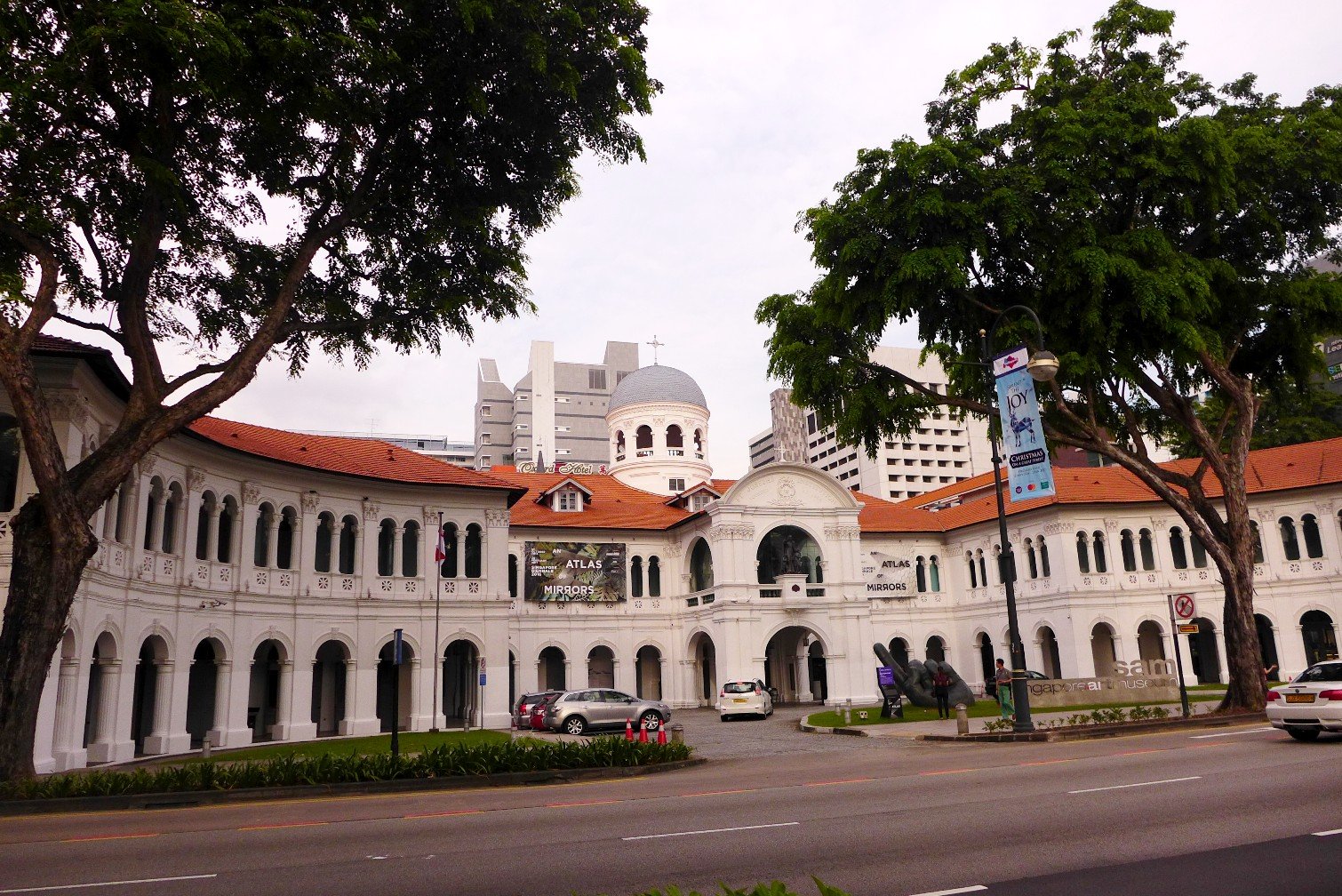 The Armenian Church was a humble match to the previous church we visited, yet it was undeniably extra special. Our visit coincided with choral practice where the songs were sung a cappella. The group’s voices just reverberate in the small structure. Every hymn was heartfelt, and it felt like we were in a private concerto.

We resumed our walk following Coleman Street heading to Armenian Street, where a series of heritage buildings were present: the Masonic Club, the Philatelic Museum, and the Peranakan Museum. Two mirrored installation pieces signaled that we were already by the entrance of Fort Canning Park, and soon, we were greeted by the massive boat frame slash dinosaur skeleton at the foreground of Singapore National Museum. The historic building exhibits a neoclassical architecture with its symmetrical structure, ionic columns and its central dome.

Another museum occupies a historic building; the Singapore Art Museum is housed in what was a boys’ school. Its crescent-shaped façade provides a small front yard, where a modern giant hand sculpture was displayed.

Next on our walk was the Cathedral of the Good Shepherd. Unfortunately, I found this the least solemn among the places of worship I visited. I say this after visiting a Hindu temple, a Chinese temple (or two), a mosque, an Anglican church and an Armenian church. Perhaps our timing was off, since a performance rehearsal was ongoing. As a Catholic, I thought that I would feel at home here, knowing that my religion is practiced here, but sadly, I felt the opposite.

We crossed the street and headed to another historic site of Gothic influence: CHIJMES. A wedding was in order in the chapel, so we couldn’t pop in and see its interior. The façade was already beautiful, and so was the courtyard brimming with walls, terraces and pointed windows of the buildings that surrounded it. Restaurants and bars occupy most of the spaces that were previously part of the convent. Jo was right: it would have been so pretty at night, but we were there on an afternoon so it was less lively.

Finally, we headed to the Raffles Hotel, where its architecture exudes a confluence of east meets west. Though majority of its façade still stemmed from western culture, here we begin to see some wooden decorative barge boards used as well as wooden screens and window frames, lending a very Asian vibe to the property. The courtyard was laden with tropical plants, such that you would believe that you are in a tropical garden instead of a luxury hotel in a modern city. Fancy a drink? The Singapore Sling was invented in its Long Bar, but would set us back a little less than S$40 per cocktail. Definitely not for a budget traveler. 😉

That ended our Civic District walking tour. It was a little tiring, full of highs and some lows. It was definitely fun to see another side of Singapore!

Note: We did this walk on a separate day, though it could easily be added to the itinerary outlined previously.