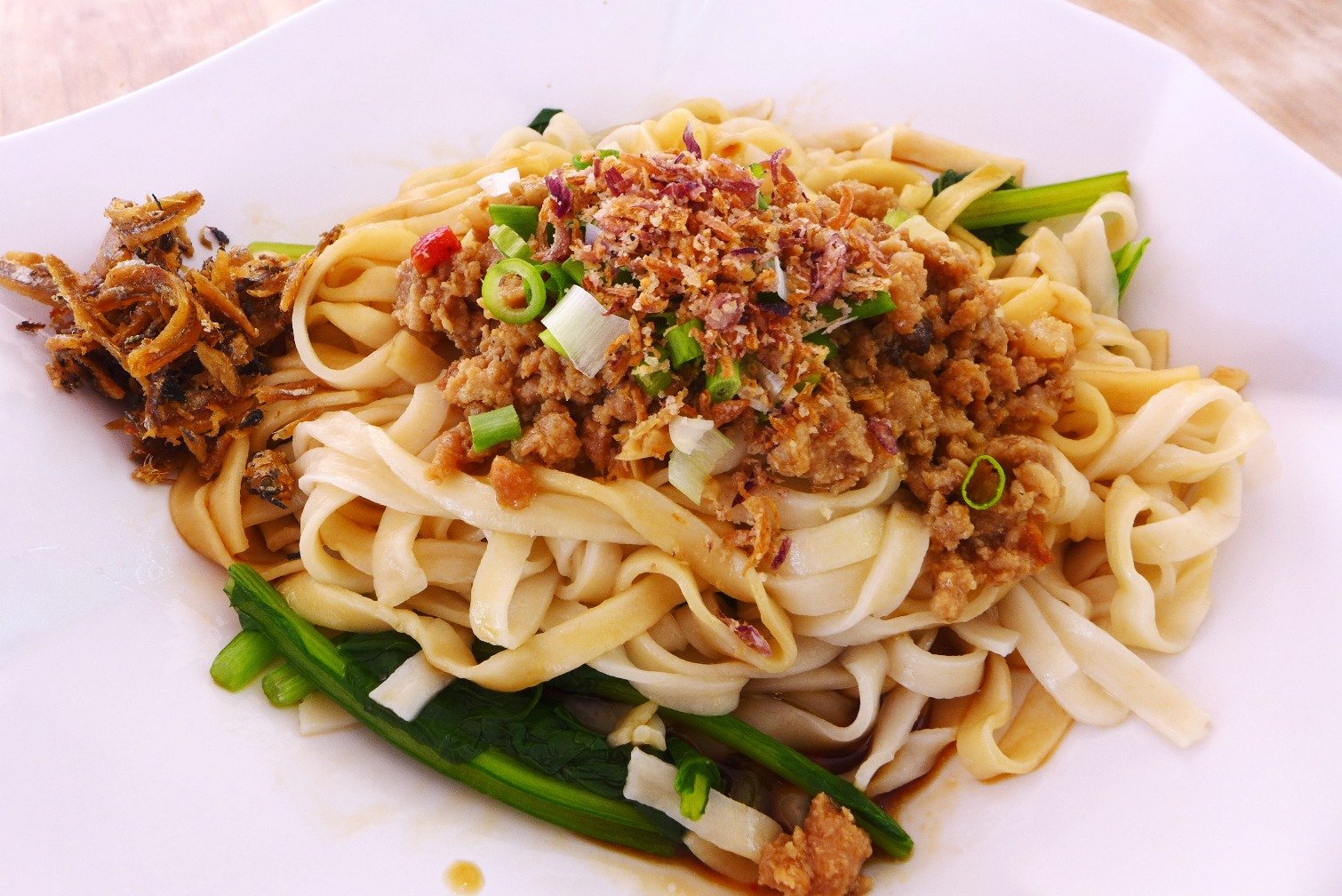 Experiencing Singapore’s culture was one of my biggest motivations in going. No unnecessary touristy activities — just immersing myself in the variety of cultures that molded what Singapore is today. By now, I have exhausted all that I can talk about Singapore’s neighborhoods and their architecture. Food is up next.

I’ve had my fair share of chicken rice over the years, yet it was my first time to eat some from Chinatown’s Tian Tian Hainanese Chicken Rice. Located in Maxwell Food Center, it had one of the longest queues, clearly marking how famous the stall was.

The chicken was quite juicy. The rice was good, an important component of the dish, even if it could be a little more sticky.

Apart from the chicken rice, my friend and I sampled some stir fried dishes, noodles and carrot cake, at the Maxwell Food Center. The char kway teow was pretty good, with the balance of its sweetness and saltiness from the soy, along with the chewiness of the noodles. The carrot cake, however, was another matter. While the flavor wasn’t bad, the texture really put me off. I’m not sure if all fried carrot cakes are like that, but hopefully I’ll get to try something better in the future.

To be honest, I didn’t like my first bowl of Singapore Laksa a few years back. Slowly, I’ve come to gain a grasp of what’s good and what’s not over the years. Sungei Road Laksa was great! The testament? Every table had bowls of the great noodle soup. The richness that the coconut milk brought along with the just-right spicy broth was really delicious.

Apart from the laksa, most tables had popiah sold just beside the laksa stall. These fresh rolls made of vegetables were extremely filling, but were a bit dry. I wish there was some sauce to dip it in.

Tip: A lot of locals also buy otak-otak from the same stall. I would’ve wanted to try except that I was feeling so full.

Literally “ice beans”, these beans with ice were really refreshing after a day of sightseeing. The servings were humongous, and they never scrimp on milk! I also loved the color on these heaps of ice — just makes them a little bit more enticing!

I waited two hours for the world’s cheapest Michelin-rated dishes. The noodles were great. Nope, scratch that. The sauce of the noodles was great, and perhaps it was the best dry noodles I’ve ever had. I didn’t exactly like the roasted pork and rice. If the wait time hadn’t been that long, I would go back for the noodles in a heartbeat.

Song Fa is synonymous to great Bak Kut Teh. Even on a Friday night, the place was full of patrons sipping hot pork soup and slurping noodles drenched with the flavorful broth. For the uninitiated, it was quite tricky to eat the meat off the pork ribs using the chopsticks. Nonetheless, it was a good hearty meal.

No visit to Little India would be complete without sampling a curry dish. I would have wanted to try a fish head curry, but as I was alone, I opted for a slice instead and ate some fish curry from Banana Leaf Apolo. The place was deserted at 11 in the morning, but I was able to witness a short prayer ceremony right after its doors opened. The fish was a little dry, prompting me to pour sauce over to compensate for moisture. The cabbage side dish was excellent. The salty bitter gourd side and a spicy fish cutlet tasting like a samosa all made up for an extremely filling meal, especially considering that all these were eaten with rice and papadum.

Tip: If you’re in Little India, also consider eating at Azmi. It was brimming with patrons and the food smelled so good! If only my stomach could fit some more food in, I would have indulged.

I watched in amazement as the phyllo dough kept stretching as the guy tossed the pastry in the air. I loved roti canai, and murtabak was roti canai filled with meat: lamb in my case, another favorite protein of mine. Needless to say, I loved this lamb murtabak from Zam Zam. I especially enjoyed eating this dish watching street life go by across the Sultan Mosque. The cucumbers with ketchup? Don’t ask me.

This was the first time I’ve ever heard of this dish, but I was so glad to have it at the food center in the National Orchid Garden. I was hungry and was lucky to have stumbled upon this food hall, where I thoroughly enjoyed this noodle dish.

The Hokkien Mee stall was closed when we got at the Old Airport Food Center, forcing me to find another stall to try. I chanced upon Chuan Kee Satay, which had some queue for its Hainanese pork satay.

On numerous occasions, I would stop by for tea or coffee when I was too tired or I felt too hot. Not only were the drinks good, but it also gave me an opportunity to see local old people (commonly referred to as uncles and aunties) pass the time.

Other Stuff to Try

I left out some dishes I know I should’ve tried, but were either out of the way to sample great ones, or were served for a group while I was alone. Here are some more things you should try: Singapore Chili Crabs, Sambal Stingray, Oyster Omelette, Hokkien Mee and Rojak.

I know it’s not very nice to play favorites, but if you ask me, my top three dishes would be Sungei Road Singapore Laksa, the lamb murtabak from Zam Zam and the Ban Mian from the National Orchid Garden (I can’t remember the stall name).