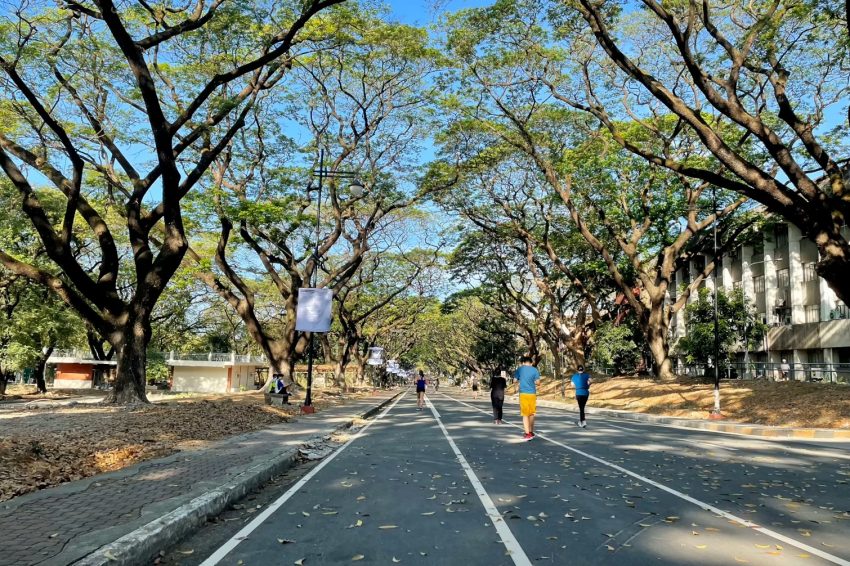 Though I would love to go out and explore new places, the ongoing pandemic has put a tight restraint on that. Even if the restrictions have begun easing up, I still feel apprehensive to travel. With no travel plans in sight, it’s only fitting to do what I could do in the meantime: explore my very own city.

Quezon City, the biggest city in the metro, doesn’t boast of many attractions. But one of those things that’s very close to my heart is wandering around the grounds of the University of the Philippines. Over the past two years, I’ve frequented this educational institution more than I had over the past decade. I witnessed how the acad oval reopened to joggers and walkers, whose numbers grew but dwindled as the pathway was re-closed. I was one with many who had to content ourselves with walking around the campus instead of the oval when it was off-limits; some made do with just occupying one lane of the University Avenue instead.

I felt the sadness as I saw some trees in front of AS cut down for the first time, even though younger trees were put in their places. I was amazed to see a taller faculty center being built, yet I honestly couldn’t picture a relatively high building in the middle of the campus. I enjoyed seeing different art installations taking over the foreground of the Oblation. I was captivated by the growing sunflowers along university avenue that signaled an upcoming graduation and the decor that were installed for the holiday season. Filipinos are indeed artistic, and no pandemic could ever stop unleashing the Filipinos’ creative spirit. Quite literally, walking around the campus was a breath of fresh air. Not only was it good for the body, but it was also good for the mind.

Much to our delight, the acad oval has re-opened in February. Our visit a month ago showcased something different: a photo series of the victims of Martial law. One tarp hung on every post; one victim with his photo and name. As we turned at the College of Law, it was only then that we realized that it was indeed a photo gallery. Entitled Dark Memories: Victims of Martial Law, it was evident that this collection was a reminder to visitors to never forget the perils that some of our fellow Filipinos had to endure during the dictatorial regime. The photo gallery was initially scheduled to run from March 15 to April 18, but it was later changed to April 1 to 30 according to the UPD website. It’s just such a shame that the tarps where placed too high that I couldn’t capture the QR code where more information could be found for anyone who was inclined to read more on the subject.

Over the next few months, join me as I explore the city I grew up in. Admittedly, most of my upcoming posts would be more about food places than attractions, but it’s worthwhile nonetheless to rediscover a location that’s too familiar yet had grown quite different given the health crisis.

Until next time, happy travels! 🙂