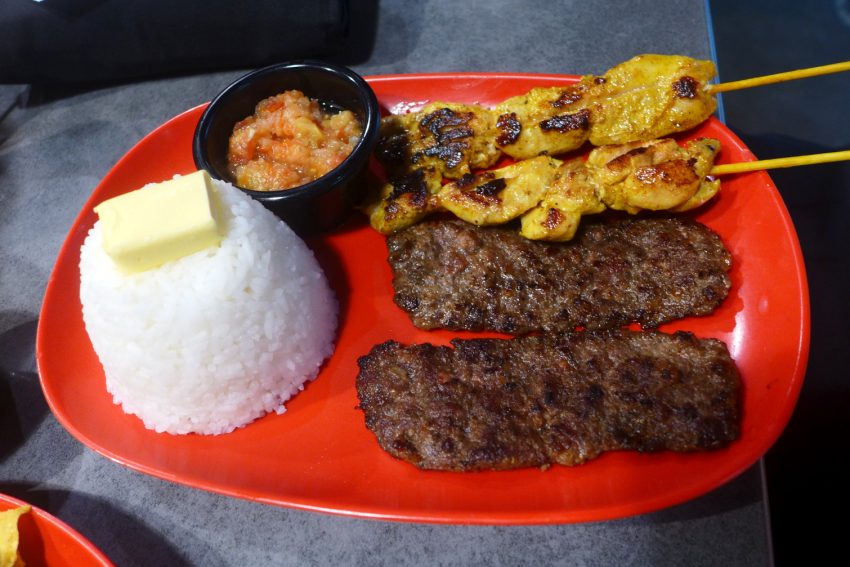 It was binge-watching YouTube videos of doner kebabs in Istanbul that prompted my craving for some Middle Eastern cuisine. Having dined at Behrouz earlier, we opted to try Uncle Moe’s this time around.

The food joint was almost empty except for one paying patron. It was an odd hour when we arrived, and the staff were having their lunch. I felt guilty for having disturbed their meal, but they quickly got up without contempt and handed us the menu.

The first of our order to arrive was this giant pile of nachos. Mr. B and I were both shocked to see how humongous our fusion appetizer was. The nacho chips were laden with keema, cheese and fresh diced tomatoes, and it was such great value for money. If you’re dining alone, this might be too much as an appetizer.

I knew early on that I wanted some shawarma. After all, it was those doner kebabs that led me to this place. When the wrap arrived, it looked too small compared to the huge portion of nachos. On hindsight, looks could indeed be deceiving. The shawarma was so full of meat that ‘generous’ would be an understatement. The meat slices didn’t taste very cuminy, a disappointment in my opinion; rather, it was aniseed that took over the flavor profile. It was laden with “cream cheese” as it was described on the menu, but it was yellow instead of the usual white. The creaminess of the cheese paired very well with the meat, and it was bite after bite of deliciousness. The salsa that was served alongside the shawarma was also a wonderful respite from the rich flavors of the meat and the cheese.

The kofta balls were not flavored too differently from any other meatball, but it was the tomato sauce that set it apart. I would assume clove was added to this tomato sauce, and that in itself elevated this dish’s flavors tremendously. It lent a Middle Eastern flair to this otherwise boring dish, and I couldn’t help having more and more of that tomato sauce. I also appreciated that the meatballs weren’t too soft, suggesting that the establishment used a generous portion of meat in each of the meatballs.

Mr. B’s beef kebab was also good; its flavors were akin to my shawarma. The chicken one was less than stellar; it somewhat paled in flavor compared to the beef version. The typical pat of butter atop the rice was very bountiful, and Mr. B seemed to enjoy his meal as much as I did.

One thing that I had to commend was that everything was very well-seasoned, a task some of the more upscale restaurants even fail at doing. The garlic sauce was a bit thick but very flavorful; in fact, it might be too garlicky to my liking that I wished it had more yogurt in it. Still, this casual joint had some very good food, and the prices just can’t be beat too. I left knowing there’s a Middle Eastern place I’d love to go back to.