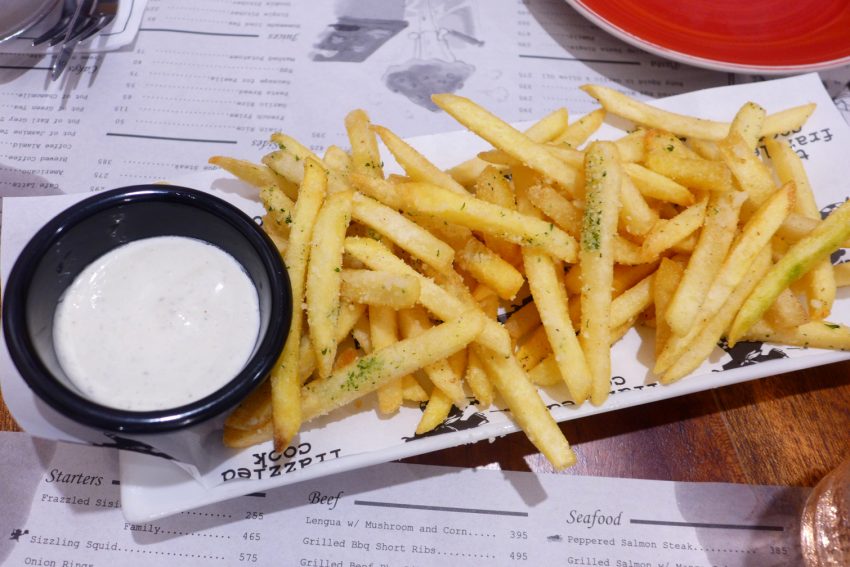 I was truly excited to try eating at the Frazzled Cook for the very first time. After all, it belonged to many lists of what to eat around the Tomas Morato area. As usual, parking in front of the restaurant was full, but I knew that a bigger parking space was available at the back after all the driving we’d had in this area.

We walked into the restaurant without a reservation, so we had to wait for quite some time before we could be seated. I was a bit annoyed that the staff refused to give us a time frame of how long we should be expecting to wait, suggesting that they couldn’t predict how long their patrons dine. It would have been a fine excuse, but I could literally see three tables finished and were simply waiting for their bills. We were given menus so that we could already choose our food while we waited. In the end, it took us less than ten minutes before being led to our table.

With the restaurant having been converted from a house, the old room walls were maintained and the furniture placement was awkward. Our table was located in one of these rooms, making our table secluded. It was nice when we were alone, but the atmosphere completely changed as soon as another table got occupied. Calling our server’s attention after our initial order also proved difficult as our meal progressed.

The mismatched furniture rendered a cozy ambiance to the place. Unfortunately, this also meant that a lot of the chairs were not only uncomfortable on their own, but also that they weren’t the appropriate for the height of the table. In our case, the table’s feet position made the seating all the more uncomfortable. The decor was eclectic and some items were interesting to see.

Our server quickly took our order, and soon some truffle fries were brought to our table. The fries were very crisp and stayed crisp throughout our entire meal. I loved the seasoning: the combination of the parmesan and that hint of truffle oil was truly delicious.

The truffle pasta was creamy with just enough truffle oil that didn’t overpower the entire dish. I hated that the pasta was soggy and it was oversauced (although I know that many people prefer it this way). I wished that there were more bacon bits and mushrooms to provide some texture and additional flavor to the dish.

The pesto pasta was definitely a let-down. The flavors were quite tolerable with the basil taking front and center. However, I didn’t think that there was enough parmesan to balance everything out. The mouth-feel was too greasy, suggesting that the sauce wasn’t emulsified properly. In contrast with the truffle pasta, the long noodles were too hard and dry; it was undercooked. The chicken atop the dish was severely underseasoned. It also didn’t look appetizing, but it was not as badly cooked as it looked. There was some pesto flavor permeating through the meat that quite redeemed the dish.

The grilled pork chops were what pork chops nightmares were made of. It was severely overcooked and dry that cutting through the meat wobbled our table. I did not enjoy it all. Flavorwise, the barbecue sauce enhanced the chops a lot. The smashed potatoes were creamy despite not having the smoothest texture. It could have been great had it been seasoned correctly. I enjoyed the char on the corn, but a little more butter would’ve elevated its flavor tremendously.

Finally, I enjoyed the buffalo wings, especially their sauce. I honestly would’ve preferred it spicier, but for it was, it was already good. I only wished the coating stayed crispier for longer, as it was already soggy by the time it arrived on our table.

All in all, I loved the truffle fries the best, followed by the chicken wings. The mains were really less spectacular. Honestly, I expected a better meal from this restaurant, but I was sorely dismayed. I hope my experience was just a one-off disappointment, but based on this undertaking, I’m not really looking forward to return. However, I caught a glimpse of their rack of ribs from another table, and boy did they look scrumptious! I’d like to try that on my next visit, whenever that might be.