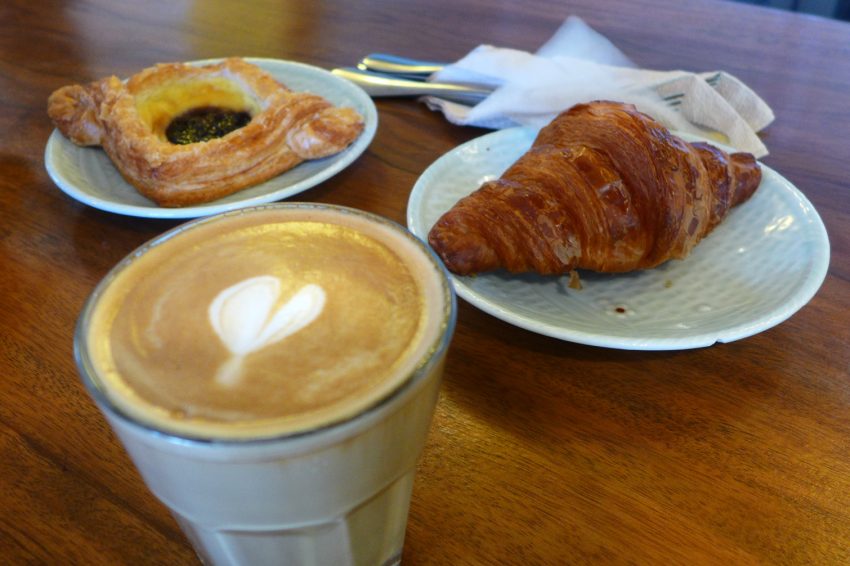 Mr. B and I often get some coffee after our weekend morning walk around the university. Skipping our usual coffee joint, we opted to drop by one of Maginhawa’s coffee shops: SGD Coffee Bodega. It was one of the few places open early in the day; unfortunately most coffee places only open later in the morning. [A possible alternative would be to try the cups sold by some enterprising Pinoys who set up carts along University Avenue.]

The shade of a tree obscured the entrance to the coffee shop. Inside, it was certainly peaceful early in the morning, with only the two of us as customers. We ordered two cups of flat white (P170 each) and some pastries (P180 each), a deviation from the heavier meals recommended by other people as we’re just not heavy breakfast eaters. Coffee beans were also on display and offered for sale, yet they came with their hefty price tags. I loved that they support local coffee growers, and maybe their prices reflect the quality of those beans…but I could only afford some local beans that were less expensive.

We sat ourselves with a view of the level below. Had it been a bit busier, it would have been a nice way to see people come and go. Like many food businesses in Maginhawa, this place has been converted beautifully from a residence. The furniture, while showcasing some wooden pieces, were far from coherent, especially with the pieces on the mezzanine. A coffee laboratory was situated in one of the rooms, a testament to the dedication of the business to the coffee industry. An informative poster hung on the wall, perhaps an attempt to educate customers with the nuances of coffee flavors.

Our order was soon served by the only staff we saw: a cashier slash barista who, in all honesty, could be a little friendlier. Contrary to our expectations, one cup had some considerable foam, almost akin to a latte, while the other had less. A bit of latte art was in the form of a tiny heart. The flat white, even with its dairy component, was more bitter than my usual brew, a plain cup of pour over coffee, but it was something I didn’t find intolerable. Mr. B disagreed and found it too bitter for his liking.

What disappointed me more were the pastries. It looked so enticing on the case, but it was a different story on palate. The blueberry danish was far from crisp, although it boasted some flaky layers. Even its pastry cream was less than stellar than I anticipated, with its thick, less-than-silky texture. The croissant looked perfectly golden, but again lacked the crisp texture a freshly baked one would have had. It was definitely not the best breakfast we ever had together. I’m not sure whether we were partly to blame, gearing towards the baked confections instead of their savory meals. Oh well.

However, what I found commendable was the level of strictness they had when it comes to safety protocol. They made sure that temperatures and vaccination cards were checked — something that all food establishments should aspire to implement with the ongoing pandemic.

Although we didn’t have a great gastronomic experience, I honestly enjoyed the ambiance of this coffee place. The tranquility it exuded was perfect for a lazy weekend morning; I just don’t know whether we’d get the same feeling had we dropped by later in the day. I’m hopeful to return someday to try more of their coffee drinks and their other food offerings.