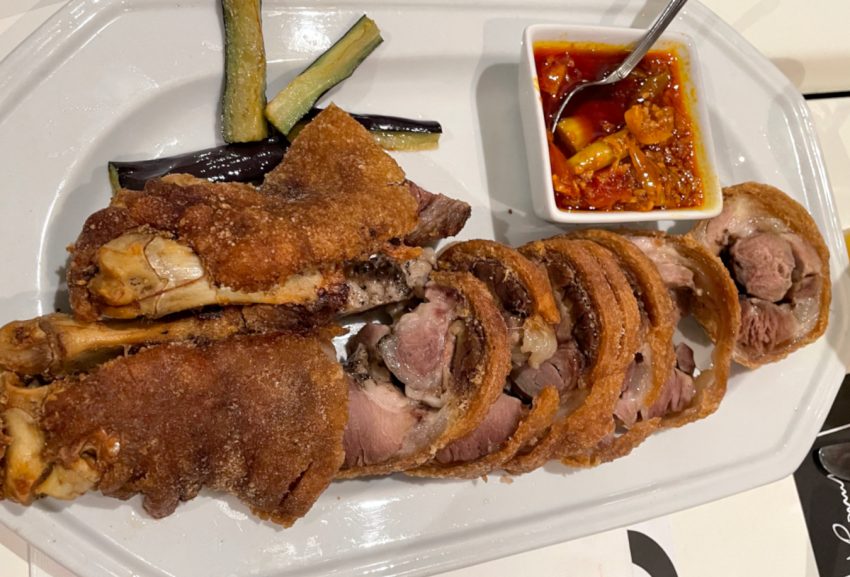 I must admit that out of all restaurants operating throughout the metro, it is those catering Filipino cuisine I am most unfamiliar with. While I love Filipino food, it is something that I eat everyday that I’d rather gladly indulge in another cuisine when dining out. It wasn’t until a friend suggested that we have dinner at Romulo Cafe that I was finally able to have a meal this famous dining institution.

My friends and I were late for our 6pm reservation, so I didn’t get the chance to see the entirety of the restaurant as we were quickly led to our table. I made the call to reserve a table a few days earlier, and the person I spoke to over the phone was kind enough to offer a private room for us. My friends and I declined as we thought we wouldn’t reach the consumable amount of P5000.

Frankly, a reservation wasn’t necessary for a Friday dinner; the space was quite empty. Sure, there were patrons enjoying their meals, but it wasn’t the Friday dinner rush I was expecting. Parking was difficult though, but one of my friends got lucky to snag the last spot.

With everybody having arrived, we were quick to order. Our appetizers soon arrived and our meal began with the lechon kawali sisig (P428). It was decently flavored — the regular trimmings of fatty porky goodness with onions and a hint of tanginess were there, yet the texture was off. There were no crispy bits that typically came from a pig’s ear, or even those bits that stuck onto the pan. Nevertheless, the dish looked spectacular. I thought that serving it with quail eggs was brilliant, and the yolk delivered a boost of creaminess to this porky dish.

Our second appetizer of tinapa rolls (P328) was vastly different. The smokey flavor from tinapa was nowhere to be found. I couldn’t taste the presence of red eggs and tomatoes either. Certainly, the description was a lot more promising than the actual dish. The wrapper was very crisp though, but beyond that, it was not an enjoyable dish.

On to the mains, the penne carbonara with Vigan longganisa (P478) was not exactly in tune with the Filipino theme and was more of a fusion dish. I was somewhat surprised that my friends wanted this pasta. It was definitely creamy, but I couldn’t find nor taste the longganisa. Apart from the pork, I associate the flavors of garlic, black pepper and vinegar as hallmarks of a Vigan longganisa, yet these were nowhere to be found in the pasta.

The gising-gising (P298) was nothing special. Here they used green beans instead of sigarilyas, or winged beans. It was creamy, but I would surmise that its creaminess stemmed from a prepared pack of coconut cream and not from a traditionally-prepared coconut milk.

It was baby pusit in garlic (P478) that won me over. Flavorwise, I wished it was less sour to allow the squid ink flavors to emanate. But boy, it was cooked perfectly! All the squid I had were very tender, and it was definitely one of the best cooking of squid I’ve had in my life. It was surely my favorite dish during our meal.

Finally, we had the boneless crispy pata binagoongan (P1028). I certainly enjoyed it being boneless, especially with its very crisp skin. I felt that it was a bit pricey though, especially considering that a certain chunk or two were left on the bone and couldn’t be eaten without fuss. The binagoongan sauce was served on the side, which allowed the pork trotters to remain crisp throughout the meal. The sauce was very good — bagoong and tomatoes dominated the flavors as this sauce should be, but it was really well-balanced. The level of spice was perfect too. This was my runner-up dish. In hindsight, maybe we should’ve ordered crispy pork binagoongan (P578) instead.

I also ordered the cool as cucumber mocktail (P178). My goodness, it was very sweet. I couldn’t drink it properly as a very small sip was a sugar overload. Moreover, some seeds from the lemon kept clogging my straw, so the entire drinking experience was ridiculous.

I had to ask for a glass of water to save myself from the sickeningly sweet drink. The waiter then informed me that they weren’t serving water on the house. I then ordered a bottle of water, which I discovered to be P68 after the bill was handed to us. This was one practice that I was annoyed about. It was easy to accept that they don’t serve water due to health practices and sanitary concerns, but to refuse to serve water and then highly price a bottle of water seemed unreasonable to me. Mind you, I even had to ask for a glass, because the bottle of water was handed as-is.

Our server was quick to address our needs though. I just couldn’t understand his humor (or even if he was trying to be funny). It was not the best service I’ve had, but certainly not the worst.

I have mixed feelings about my Romulo Cafe experience. Some dishes were winners while others were quite meh. Don’t get me wrong, some of their flavors were good, but to someone who eats these dishes regularly at home, some of them just weren’t mind-blowingly good. I also think that the servings were rather small. The overpriced water left a bad taste in my mouth, not because of the cost, but because of the idea/practice itself. My entire experience was very far from the images I’d conjured up in my mind, but it was good to have finally dined in this well-known restaurant. Will I come back? Maybe, but I’m not in a rush.

P.S. Our bill ended up just a few pesos short of P5000, so if you’re a group of five and planning to order almost the same amount of dishes that we did, take the offer of a private room. 🙂